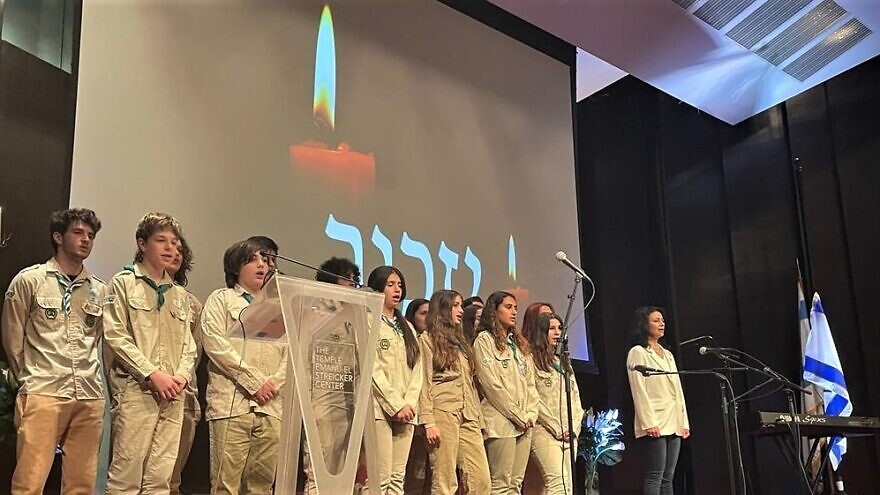 (May 4, 2022 / JNS) While sirens didn’t wail and shops didn’t close, there was an opportunity in New York for remembrance. As many as 1,000 members of the Israeli expatriate community, along with Jewish New York natives, gathered on Tuesday night at Temple Emanu-El on Manhattan’s Upper East Side for a Yom Hazikaron program honoring the lives of Israel’s 24,068 fallen soldiers and victims of terrorist attacks.

The ceremony, held in person for the first time since 2019, was hosted by the Consulate General of Israel in New York. Addressing the largest Israeli community in the Diaspora, Ambassador Asaf Zamir, Israel’s consul general in New York, told those gathered that for him, this holiday makes him feel more connected to Israel than any other, explaining to JNS that his posting a half a world away didn’t change that.

“I feel very differently, but honestly, I’ve been in New York for seven months, and this is the first time I’ve felt that this is a home away from home. It’s the closest I’ve felt—seeing all the Israeli and Jewish community come together for such a touching ceremony on the most sacred of days for me as an Israeli was very emotional,” he said.

The ceremony included prayers and remarks from loved ones of those killed in battle and by terrorism. Israeli TV star Lior Raz of Netflix “Fauda” fame, whose girlfriend was stabbed to death in Jerusalem, recited a memorial prayer for fallen soldiers. Rabbi Joshua Davidson from Temple Emanu-El and Cantor Netanel Hershtik from the Hampton Synagogue in Westhampton Beach, N.Y., recited the Yizkor and El Malei Rachamim prayers, respectively.

The evening began with the lowering of the Israeli flag to half-mast, with the somber duties handled by Shir Golan, wrapped in a scarf bearing the insignia of the Hapoel Tel Aviv FC soccer team. She represented the family of Tomer Morad, who was murdered in an April 7 terror attack in Tel Aviv when a Palestinian terrorist opened fire at crowds of people dining and drinking on Dizengoff Street. Morad was posthumously honored by the team of which he was a dedicated fan. 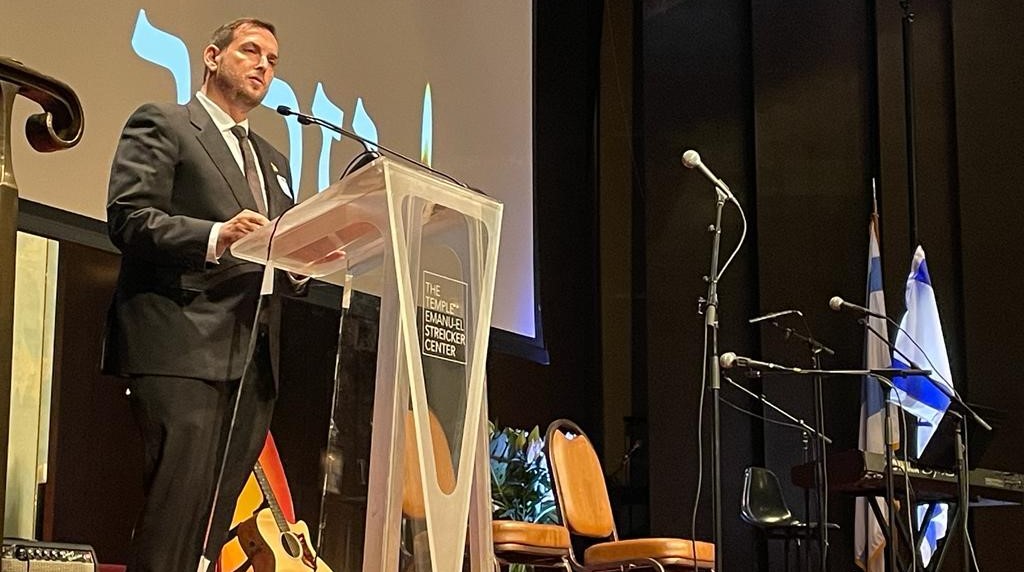 Ambassador Asaf Zamir, Israel’s consul general in New York, speaks as part of a Yom Hazikaron memorial program at Temple Emanu-El on Manhattan’s Upper East Side, May 3, 2022. Credit: Courtesy of the Israeli Consulate in New York.

‘The empty space from this loss’

The torch of remembrance was then lit by Elad Mukadi, whose father, Uzi, was killed in action in the First Lebanon War, and Eli Weiss, whose brother, Ari, was killed by Hamas snipers in Shechem. Internationally known Israeli singer-songwriter David Broza contributed a rendition of “Yiyeh Tov” (“It Will Be Good” or “Things Will Get Better”). Perry Hiiman addressed the audience in Hebrew, recounting the struggle of growing up without his father, Hillel, killed by Syrian forces in the Golan Heights during the War of Attrition when Perry was only 9 months old.

“Bereavement has accompanied me from the dawn of my childhood, and with it, the memory of my father that I did not have the privilege of knowing. Over the years, I have tried to gather all the information that people told me about my father in order to build a picture of his character. The empty space from this loss still leads me to search for more information about my father. This curiosity has floated through my life, almost daily,” he stated.

Israeli entertainer Ninet Tayeb sang Leonard Cohen’s version of “Hallelujah,” with the audience visually moved. She concluded the program by taking the stage with a group of youth from Tzofim, Friends of Israel Scouts, in a rendition of the Israeli national anthem, “Hatikvah,” as the crowd sang along.

Zamir told those gathered that when he was born, his parents told him that he would not have to serve in the Israel Defense Forces because they genuinely believed that by the time he reached draft age, Israel would be at peace with its neighbors. He explained to JNS what he will tell his young daughter, once she is prepared to have that talk.

“First off, if you ask her, she’s ready for any conversation. Even though she’s 2 years old, she seems ready,” he said.

“I wouldn’t be in public life, politics or diplomacy if I didn’t think there was hope, and I’m sure we will progress and do everything to reach that goal. But, looking back at history, that doesn’t mean we will not always have to stand up from threats coming from certain directions,” he explained. “It doesn’t mean that any time in the near future, we will be accepted by everyone. We look back at history and we know how it is, and sadly, we need to prepare for that as well.”

Just as in Israel, those in New York will transition on Wednesday night to Yom Ha’atzmaut, Israel’s Independence Day, with celebrations scattered locally over the next few weeks.