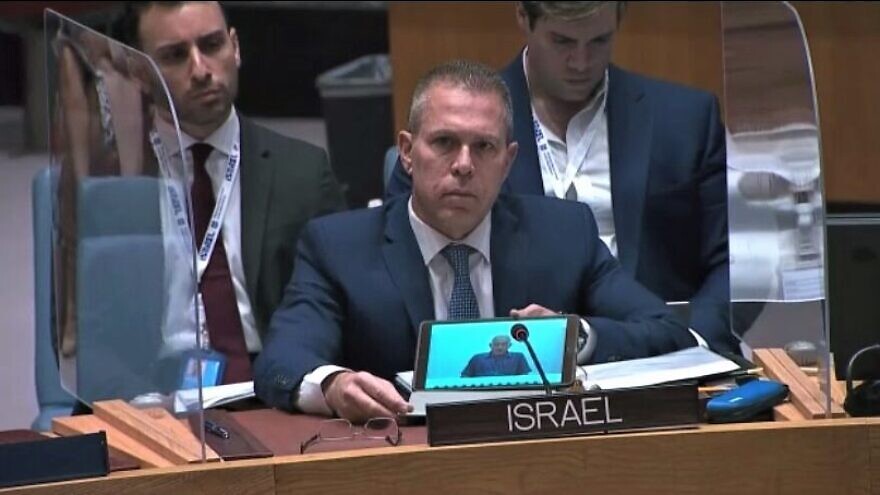 (July 28, 2022 / JNS) Israel’s ambassador to the United Nations had a blunt message for the U.N. Security Council on Tuesday. When it comes to addressing the Israeli-Palestinian conflict, Gilad Erdan said the council, essentially, can’t see the forest for the trees.

At its quarterly open debate on the Israeli-Palestinian file, Erdan slammed the council for focusing their conversations on trivial matters, like municipal rulings or local tribal disputes. He called the approach counterproductive to bottom-up peace efforts and collaborative progress, which he said were possible.

“We take a century-old conflict and put it under a super-microscope to analyze its most useless and insignificant aspects, rather than see the big picture and look for real solutions to our real problems,” Erdan told the council.

As he approached the two-year anniversary of his appointment at Turtle Bay, he expressed frustration that the Security Council remains entrenched in its old viewpoints and methods on the Israeli-Palestinian file while the Middle East region has passed it by.

“If we are interested in moving forward towards a better future, the starting point should be analyzing best practices. And we don’t need to look far to find success stories of regional peace. Just two weeks ago during President Biden’s visit to the region, the evolution of a big part of the Middle East—from conflict to coexistence—was openly displayed for the world to see. Without baseless condemnations, repetitive debates or poisonous libels, countries in the region chose peace and as a result, received progress,” said Erdan.

He chided the council for consistently ignoring what he says has been a central tenet to the Israeli-Arab circle of peace: Iran.

According to Erdan, Iran’s dangerous nuclear ambitions and sponsorship of terror proxies “pushed the moderate powers of the region together. The peace that we have built is also a byproduct of the international community’s inaction. As we sit hearing the same grievances every month, the writing on the wall has never been so clear,” he stressed.

‘Outstanding issues on the land border’

The Security Council debate played out like those before it with various countries expressing the same levels of deep concern over Jews building homes in Judea and Samaria, Israeli security measures and the lack of progress on a political settlement.

Notably, U.S. Ambassador to the United Nations Linda Thomas-Greenfield’s statement simply served as a recap of Biden’s recent visit to the region, noting a number of initiatives that were announced. Discussion of the Palestinians was limited to U.S. donations to Palestinian entities and infrastructure projects. Thomas-Greenfield did not touch on the details of the conflict itself, reflecting Erdan’s sentiment that the council’s efforts need to be adjusted and broadened.

“One of the most important aspects of the recent diplomatic initiatives in the Middle East is that they reflect a genuine regional effort to achieve peace for all peoples and advance prospects for cooperation in crucial areas that will help countries tackle significant challenges,” he said.

As has increasingly been the case in recent months, Russia displayed antagonism towards Israel in its speech at the council. Russian Chargé d’Affaires Dmitry Polyanskiy chided “Israeli settlers who strive to expand and secure their occupation of the West Bank [and] do not give up attempts to create a number of outposts.”

Polyanskiy claimed that Israelis are “given total impunity for crimes against the Palestinian people.”

He took a swipe at America as well, saying that it is to blame for the dormancy of the work of the so-called Middle East Quartet of the United States, the United Nations, the European Union and Russia, which was formed to mediate the Israeli-Palestinian peace process.

Russia put forward an initiative to convene an extended ministerial meeting of the Quartet with the participation of key members of the League of Arab States. “Unfortunately, this issue remains unresolved due to the lack of interest of the United States in resumption of the activity of the Quartet,” said Polyanskiy.

Only one Security Council member touched on active peace negotiations in the region. Norwegian Ambassador Mona Juul noted “the important mediation efforts to establish the maritime delimitation line between Israel and Lebanon. Norway encourages the governments of Lebanon and Israel to swiftly come to a mutual agreement for the benefit of both countries. This should also help solve the outstanding issues on the land border.”