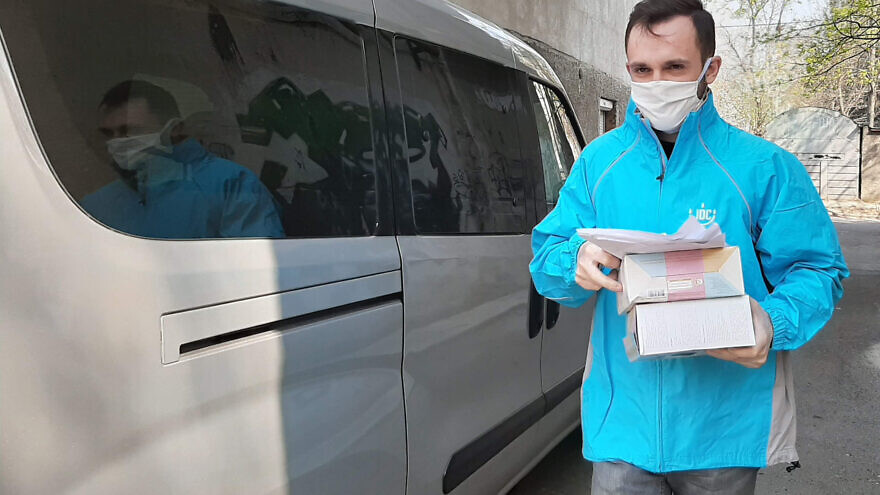 (April 6, 2020 / JNS) To connect the global Jewish community for its first Passover in the age of social distancing, the American Jewish Joint Distribution Committee, or JDC, is deploying special online and digital holiday tools to help Jews in isolation reach their families, friends and wider Jewish world.

These innovations, including an online Passover University for Jews in post-Soviet states, are among other JDC-sponsored virtual seders, holiday classes, educational programs and materials aimed at creating a meaningful Passover experience from one’s home.

“We’re making sure Passover’s message of freedom can be experienced by those facing the loneliness of quarantine and those yearning to brighten their tables—absent of family and friends—with new tastes and practices that can heighten the holiday’s meaning,” said JDC president Mark Sisisky and JDC interim CEO Asher Ostrin. “We’re widening our Passover experience beyond borders and physical space to embrace the fullness of Jewish peoplehood and ask others to commit to do the same.”

JDC Entwine, JDC’s young adult platform, is now offering a free digital download of ReOrdered, its successful DIY Passover toolkit that gives users a global, interconnected experience around the themes of the holiday. Through it, toolkit users get a chance to explore eight global Jewish communities, including their traditions, recipes and stories, and to reflect on their own experiences as a global Jewish citizen.

The free kit was used last year at more than 400 seders in 18 countries around the world; this year, more than 1,000 physical kits were ordered and distributed before the new digital version was deployed. More than 1,000 Passover seder kits were distributed before the holiday; this year’s offers users an inside look at Jewish communities from Morocco, the former Soviet Union, Sarajevo, Argentina, Greece, India, Poland and Ethiopia, April 2020. Credit: Courtesy.

In the former Soviet Union, where Jewish communities have experienced a revival of Jewish life since the fall of communism, Passover University has been rolled out for the first time online. The seminar teaches participants about the history and traditions of Passover and gives them the skills to conduct their own seders.

Allowing participants from all around the world to partake and feel connected to the global Jewish community, the course already has 54 participants drawing from Russian-speaking communities in Ukraine, Belarus, Poland and England.

The curriculum includes various virtual lectures and activities with Jewish educators two to three times a day, as well as online meetings with group leaders for ongoing feedback and discussions. The course concludes with a virtual Passover party for all its participants.

Passover University, which was held previously for five years through in-person classes, was launched by JCC Solomonika in Dnipro and is now conducting a partnership with the JCC Beit Dan in Kharkov, Ukraine.

JDC has also modified dozens of Passover activities for online audiences, including more than 20 online seders that will be led by JCCs and community centers across the region this year. It was also able to carry out its three-decade-old tradition of distributing matzah to needy Jewish elderly in parts of the former Soviet Union, so they can savor the tastes of the holiday, even at a time of social distancing.

The distribution was safely conducted with minimal to no contact, with aid workers wearing masks, gloves and taking appropriate sanitary measures. This matzah distribution effort is made possible through JDC’s partnerships with the Claims Conference, Jewish Federations, and the International Fellowship of Christians and Jews (IFCJ).