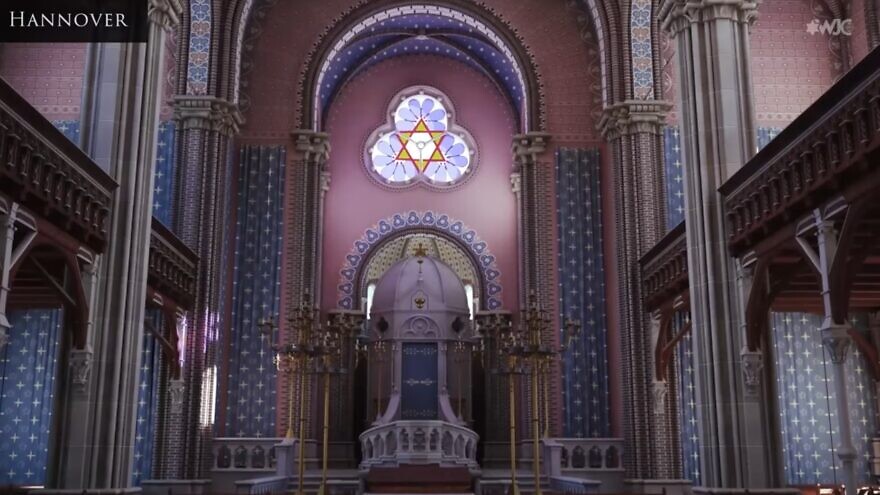 A digital reconstruction of the Synagogue at Rote Reihe 6 in Hannover, Germany, destroyed during Kristallnacht in 1938. Source: Screenshot.
Spread the word.
Help JNS grow!
Share now:

(November 9, 2021 / JNS) The World Jewish Congress will mark the 83rd anniversary of Kristallnacht by projecting digital reconstructions of 18 synagogues destroyed by Nazis in Germany and Austria in November 1938.

Using 3D technology, images showing the interiors of the religious institutions before they were damaged, knocked down or burned to the ground will be shown on Tuesday night outside 13 synagogues across Germany and five synagogues in Austria. Visitors will be given 3D glasses on site.

The initiative is part of the WJC’s #WeRemember campaign.

Kristallnacht, also referred to as the “The Night of Broken Glass,” was a massive anti-Jewish program that occurred on the night of Nov. 9-10 in Germany, Austria and the German-occupied region of Czechoslovakia. In 48 hours, Nazis destroyed synagogues; looted and vandalized Jewish businesses, homes and cemeteries; and killed Jews on the spot.

Lambrecht said “where earlier there was a synagogue, today there stands an apartment house, a church, a disco. Where earlier a splendid dome rose up above the bimah, today we are lucky if we can still find a few fragments. The facade projections are an impressive reminder of this.”

“They remind us of the National Socialist crimes against the Jews,” she added. “And they remind us that we must be determined in working actively against anti-Semitism.