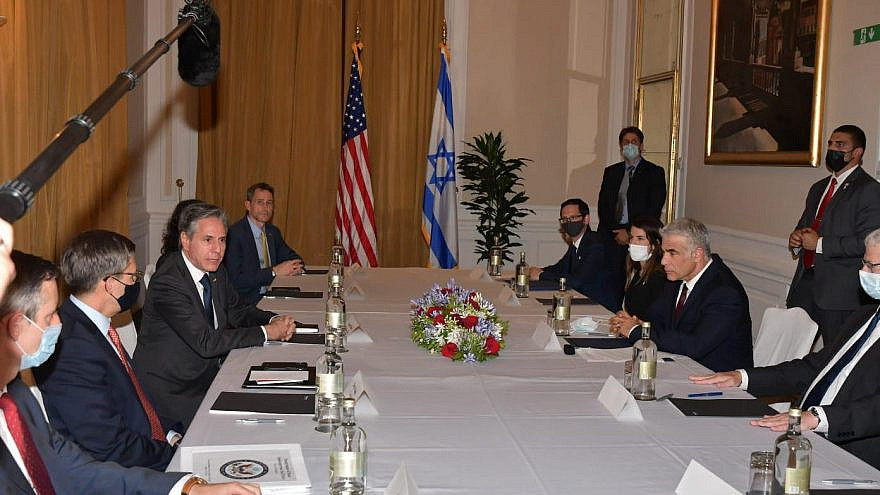 (June 28, 2021 / JNS) Israeli Foreign Minister Yair Lapid told U.S. Secretary of State Antony Blinken in Rome on Sunday that “mistakes were made” in recent years that damaged bipartisan support for Israel, and that the two would “fix those mistakes together.”

Lapid’s remarks echoed statements he made shortly after taking office, when he claimed that the administration of former Prime Minister Benjamin Netanyahu had become too close to Republicans, risking turning Israel into a partisan issue. He called Netanyahu’s policies towards Democrats “shameful and dangerous.”

While expressing Israel’s “serious reservations” about the Iran nuclear deal during his meeting with Blinken, Lapid again made an oblique reference to Netanyahu’s approach, saying, “We believe the way to discuss those disagreements is through direct and professional conversation, not in press conferences.”

Referring to his upcoming “historic” trip to the United Arab Emirates, which normalized relations with Israel in September of last year, Lapid thanked the United States for helping Israel’s regional normalization efforts. “I look forward to working with you to widen the circle of peace in our region,” he told Blinken.

Blinken said that the Biden administration strongly supports the normalization jump-started by the Abraham Accords. However, he added, “as vital as they are, they are not a substitute for engaging on the issues between Israelis and Palestinians that need to be resolved.”

He stressed the importance of reconstructing the Gaza Strip following Israel’s “Operation Guardian of the Walls,” the 11-days of fighting between Israel and terrorist groups in Gaza sparked by Hamas launching rockets at Jerusalem on May 10.

During his two-day trip to the region last month, Blinken vowed to “rally international support” to rebuild Gaza.

Both leaders stressed the “deep, enduring” relations between their countries “based on shared values and interests,” but said that disagreements were to be expected.

“We want the same things. We sometimes disagree about how to achieve them,” said Lapid.

“We have the same objectives; sometimes, we differ on the tactics,” agreed Blinken. “And we, I think, are very clear and direct with each other when that’s the case. And that’s exactly the way it’s supposed to be.”