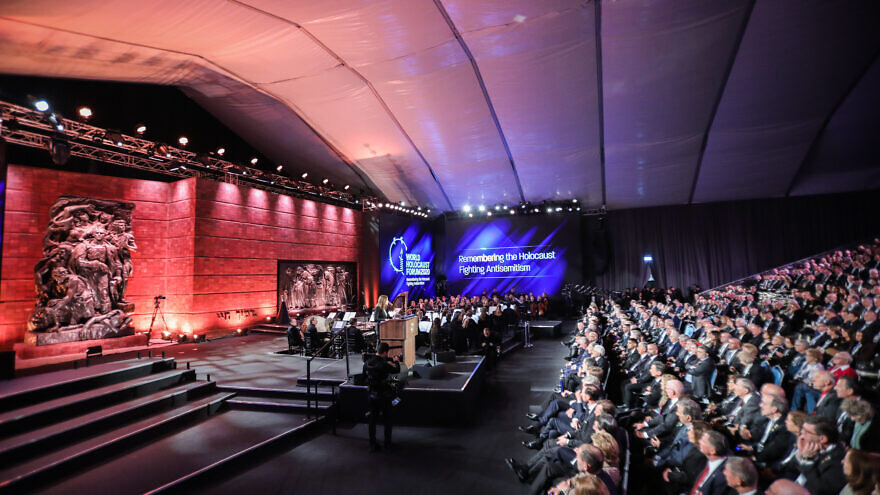 A view of the audience at the Fifth World Holocaust Forum at the Yad Vashem Holocaust memorial museum in Jerusalem on Jan. 23, 2020. Photo by Yonatan Sindel/Flash90.
Republish this article
827 WORDS
Spread the word.
Help JNS grow!
Share now:

(January 23, 2020 / JNS) Several top world leaders addressed the Fifth World Holocaust Forum at Yad Vashem in Jerusalem on Thursday in an event that commemorates 75 years since the 1945 liberation of the Auschwitz-Birkenau concentration camp in Nazi-occupied Poland.

“Israel is eternally grateful for the sacrifice made by the Allies. Without that sacrifice there would be no survivors today. But we also remember that some 80 years ago, when the Jewish people faced annihilation, the world turned its back on us,” said Israeli Prime Minister Benjamin Netanyahu.

“The Jewish people have learned the lessons of the Holocaust: to take, always to take seriously the threats of those who seek our destruction; to confront threats when they are small; and above all, even though we deeply, deeply appreciate the great support of our friends, to always have the power to defend ourselves by ourselves. We have learned that Israel must always remain the master of its fate,” said Netanyahu. 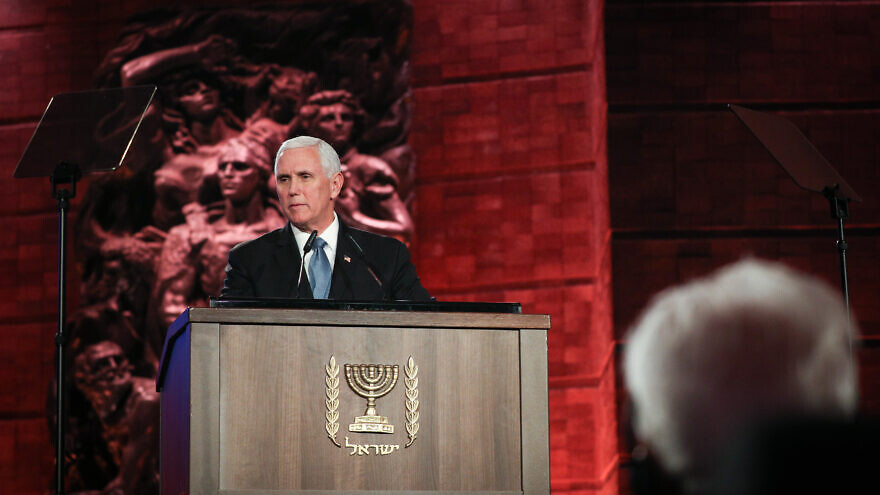 In remarks to those gathered, Putin said his country mourns “all the victims of the Nazis, including 6 million Jews,” and that the death camps were “not just operated by Nazis, but by their henchmen in various countries,” in an apparent swipe at Poland and other eastern European nations. Polish President Andrzej Duda canceled his attendance at the commemoration after he was denied being able to speak at the event.

The Russian leader noted that the Soviet Union “paid the highest price, more than any other” during World War II, with 27 million killed, calling it the “price of victory.”

Putin also claimed that 40 percent of the Jewish Holocaust victims were Soviet citizens, a figure disputed by historians.

“We need to find the courage not just to speak about anti-Semitism, but also to do everything in our power to protect Jews,” he said.

‘A dark stain on human history’

“Today, we remember what happens when the powerless cry for help and the powerful refuse to answer,” he said.

The vice president also recalled his visit to Auschwitz last year, saying that one cannot visit the site “without becoming over with emotion and grief.”

“One cannot see the piles of shoes, the gas chambers, the crematoriums, the lone box car facing the gates of the camp … without asking, ‘How could they?’ ” he said.

Pence also called on the world to unite against growing anti-Semitism, and notably called out Iran for its Holocaust denial and threats to wipe out Israel.

“Today, we remember what happens when the powerless cry for help and the powerful refuse to answer.”

France’s Macron also spoke out against modern anti-Semitism, saying that despite all that has passed, “anti-Semitism and the scourge of anti-Semitism has returned, and with it, xenophobia and intolerance have also raised their ugly heads.”

“We will not allow ourselves to stand by in silence because we promise to remember and to take steps. Remember, never forget,” he emphasized.

In his address, Prince Charles spoke about his grandmother, Princess Alice, who is buried on the Mount of Olives in Jerusalem and helped to save a Jewish family during the Holocaust.

“My grandmother, who is buried on the mount of Olives, has a tree plated here at Yad Vashem and is counted as one of the Righteous Among the Nations, a fact that gives me and my family immense pride,” he said.

German President Frank-Walter Steinmeier said as a German leader, he stands “laden with guilt” over the atrocities committed by his country.

He also expressed concern over rising anti-Semitism, noting the October 2019 attack on a synagogue in Halle, Germany.