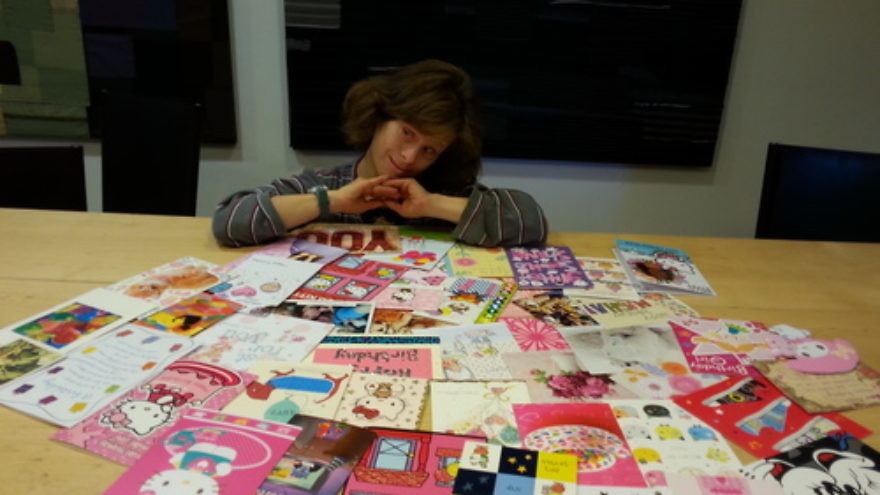 (February 9, 2016 / JNS) Masha Roth is 46, but much younger at heart. She lives on a kibbutz in Israel. Her relatives say she is smart, tenacious, and persistent. She also has Down syndrome.

“Growing up with Masha was interesting,” says her brother, Ram Roth of New York. “She always needed someone to watch her, to play with her.”

But Ram says he learned patience and how to be a good teacher from his sister, who is five years younger. Growing up, she would revel in the little things and find playmates in the youngest generations of the family. And she always loved birthdays.

“For a few months before her birthday, whenever she would see people, she would tell them, ‘My birthday is December 1st,’” Ram recalls. “And she would ask them to send a card. Masha likes to get mail and gifts, just like—but even more—than everyone else.”

So three years ago, with Masha’s passion for her birthday as strong as ever, Ram and his nephew Tamir Weisberg decided to get her some birthday letters. Ram was planning a simple Facebook post, but Weisberg found something better: Random Acts of Kindness – Reddit.

“I submitted a request a few months before her birthday, asking if a couple of people could mail her cards. I wrote something like, ‘It would mean the world to her to get birthday cards for her 44th birthday,” Weisberg recalls. Instantly, there were all kinds of responses, and the social worker who assists Masha in her home within Kibbutz Kishorit in northern Israel called to say her patient was getting mail from all around the world.

This past year, when Roth turned 46, Weisberg again posted a request for cards on Reddit. This time, the link was shared on the Keep Olim in Israel Movement Facebook page and Roth’s mailbox exploded. She received well over 250 cards.

The cards came from strangers, but also from old connections who suddenly learned about the project.

Rivka Fleischman, who met Roth when she was a 34-year-old teacher’s helper at the Bais Yaakov school in Baltimore, where Fleischman was a student, says she heard about the project from Weisberg and “jumped on the opportunity to rekindle the friendship” she had with Roth. Fleischman says she chose to study to be a special education teacher because of Roth’s influence.

“Masha is caring—about everyone and everything. She sees the best in people and is easily moved by both the good and bad in the world,” Fleischman says. “Others should get involved [in this project]. It is a simple, easy thing to do to bring her happiness, the way she brings happiness to the people who know her.”

And even to the people who don’t. Like Elle Becker, mother of 3-year-old Lily, whose entire preschool class at Beth Hagan in Great Neck, N.Y., made cards for Roth.

“I figured it couldn’t hurt to put the request out to the other class mothers and teachers and see if they, too, wanted to join me in this lovely mitzvah,” says Becker. “Without hesitation, the morot (teachers) got to work.”

The result was a special birthday album, complete with all the girly things that Masha loves.

“Wouldn’t this world be such a better place if we could all just do something nice to make a stranger’s day brighter?” Becker asks. “We all have struggles, but with more chesed (loving-kindness) and tikkun olam (repairing the world), maybe our personal issues wouldn’t be so daunting.”

“The coolest part,” according to Weisberg, is that even as the cards came in well before her birthday, Masha waited until Dec. 1 to open them. Early that morning, she started going through the bunch.

“Dear Masha—Happy birthday. Wishing you health and happiness. I hope you get everything you wished for,” read another card.

“Every day she would go to the mailbox and she was just overwhelmed and happy that people thought of her,” says Weisberg. “I think this has become a very important project.”

Aside from the happiness the cards bring his aunt Masha, Weisberg hopes other people take notice of this phenomenon. Although sometimes people with disabilities seem unapproachable or different or scary, and people will stare at them or refuse to speak with them, Weisberg says they are “actually beautiful souls.”