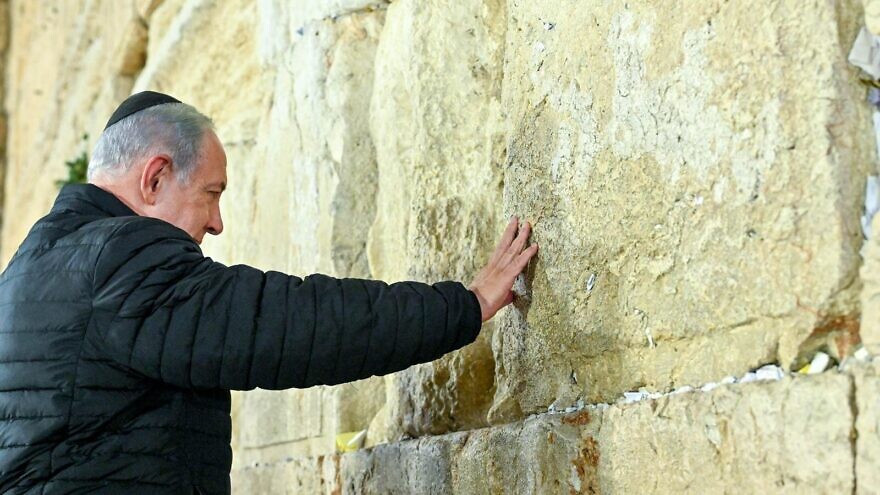 (January 2, 2023 / JNS) Israeli Prime Minister Benjamin Netanyahu on Sunday night visited the Western Wall to mark the inauguration of his government, the 37th in the Jewish state’s history.

“I just wrote in the [guest] book: ‘The Guardian of Israel neither slumbers nor sleeps.’ I have summarized the two continuing actions that I have taken upon myself…. We will continue to do this on behalf of the citizens of Israel, the State of Israel and the Land of Israel,” said Netanyahu during the visit.

“I must say that I am also moved this time as well, to accept the position and lead the State of Israel. I have come here, the quarry from which we were shaped, to touch the stones of the Western Wall, and to remember that we are charged with the obligation of safeguarding the heritage of generations and ensuring our future for the coming generations as well, and this we will do,” the prime minister added.

Netanyahu’s government was sworn in on Thursday, the culmination of a weeks-long political process following the victory of his right-religious bloc in the Nov. 1 national elections.

Netanyahu, Israel’s longest-serving leader, has taken the reins for his sixth term in the Prime Minister’s Office, to which he has returned following a year-and-a-half hiatus.

His Likud Party is leading a 64-member coalition in the 120-seat Knesset, that comprises the Religious Zionism Party, Otzma Yehudit, Shas, United Torah Judaism and Noam.

In a speech to the Knesset on Thursday, Netanyahu said his new government would focus on three main goals.

First, he said, it would prevent Iran from “developing an arsenal of atomic weapons that will threaten us and the whole world.” Second, it would develop Israel’s infrastructure and deliver “a flourishing economy to every part of Israel.” Third, it would expand “the circle of peace with Arab states with the goal of ending the Arab-Israeli conflict.”

For his part, Netanyahu held his first working meeting with Mossad chief David Barnea, during which the prime minister was updated on the full range of the agency’s operational and intelligence matters in general, and on the Iranian issue in particular.