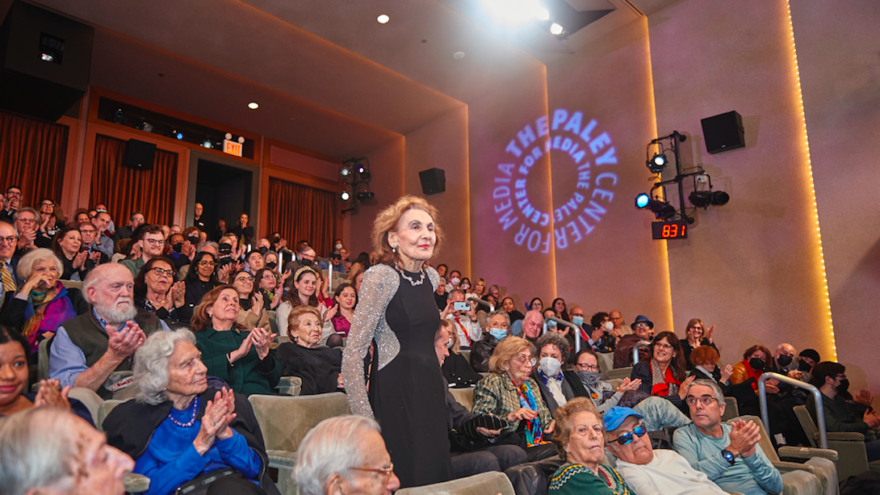 Holocaust survivor Helena Weinrauch, who appears in “Reckonings,” stands and receives a round of applause at The Paley Center for Media in Manhattan. Credit: Perry Bindelglass.
Republish this article
1342 WORDS
Spread the word.
Help JNS grow!
Share now:

(November 4, 2022 / JNS) Near-centenarian Holocaust survivor Helena Weinrauch danced at The Paley Center for Media in Manhattan on Thursday night, minutes before a sold-out premiere of the new film “Reckonings.”

Weinrauch, 98, had mixed emotions while walking into the theater to see the documentary in which she appears.

“Reckonings” opens with Weinrauch explaining that when British soldiers liberated her from the Bergen-Belsen death camp in 1945, she looked similar to the corpses on a truck that was to take them to be “taken care of.”

Presumed dead, she was placed on the truck as well, but a British officer pulled on her leg and then announced, “That skeleton is still alive.”

The release of “Reckonings” marks the 70th anniversary of the Luxembourg Agreement, reached on September 10, 1952, in which the German government agreed to pay reparations to both survivors and the State of Israel. It was signed by Konrad Adenauer, then chancellor of Germany, and Moshe Sharett, who two years later became Israel’s second prime minister.

Nothing about the issue of reparations was simple. Some survivors viewed reparations as “blood money,” including future Prime Minister Menachem Begin, a Holocaust survivor, who vehemently opposed them. Then-Prime Minister David Ben-Gurion favored accepting the funds in order to finance the upbuilding of the State of Israel and improve the lives of its citizens.

Adenauer had been opposed to Nazism and favored talks for reparations, while several members of his government were against them. While Adenauer may have thought reparations were justified from a moral perspective, he must have known that they would also aid Germany’s reacceptance by the international community.

During the debate over reparations talks, the Knesset was stormed by protesters for the first time, but Ben-Gurion maintained his policy, and the measure to negotiate passed by a single vote.

Thereparations helped strengthen Israel’s economy, which was in dire straits at the time, and aided in the country’s absorbtion of 500,000 Holocaust survivors who had made aliyah after the war.

Besides Weinrauch, survivors interviewed in “Reckonings” include Chava Nissimov, Irene Weiss, Serena Neumann and Tova Friedman,  who explains that her mother waited three years to see if any of her 150 relatives, including nine brothers and sisters, would be found alive. None were.

Grossman is an acclaimed filmmaker who also directed “Who Will Write Our History,” which won the Audience Award at the San Francisco Jewish Film Festival. She said she was honored to make “Reckonings,” and that few are aware of the leap of faith required by all sides on the issue of reparations.

“You could still hear the sand from the bombs of war reverberating,” Grossman told JNS. “It was extremely controversial at the time, and some survivors considered it blood money. But on the other hand, many of them had no other way to get on their feet. There’s no way of coming to a clean conclusion or one good moral path after such a rupture in the fabric in the universe.”

Grossman interviewed both Israeli President Isaac Herzog and former President of the German Bundestag Wolfgang Schauble for the film.At one point, Herzog says, “We don’t have the right to forgive.” He adds that reparations don’t erase the past, but also notes that Germany is a strong ally and friend of Israel.

“You cannot make good,” says Schauble. He adds that payments are meant to, when possible, “alleviate the consequences of injustice.”

The film felt like a spy novel when it described Jewish representative Nahum Goldmann secretly meeting Adenauer and telling the German leader that he needed to speak for 15 minutes without interruption.

There is also a moving moment when Weinrauch says, “Dancing helped me get back my sanity. When I dance, I forget everything. I see only beauty and I hear only beauty.”

Weinrauch received rousing applause after the screening when she stood up and lifted her arms in the air. All survivors present were then asked to stand so the audience could acknowledge them. 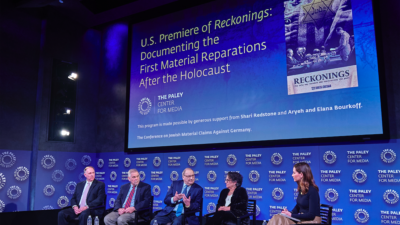 Abe Foxman, a survivor and national director emeritus of the Anti-Defamation League, told JNS that, at the kitchen table, his father would argue against accepting reparations while his mother would advocate for taking them. His mother won out and the money was extremely helpful to his parents. Foxmannoted that he had received an application for reparations but never filled it out. The film, he said, is crucial because people don’t realize the complexity of what took place.

Claims Conference member Ben Ferencz, 102, chief prosecutor in one of the most famed Nuremberg trials, explains that the initial request of Germany was met with the response, “That exceeds our capacity to pay.”

Ultimately, the German government paid a lump sum of about $107 million and more than $700 million in ships, raw materials, goods and petroleum. Negotiations have continued until the present day, including in Jerusalem and New York, and sometimes officials communicate with Holocaust survivors over Zoom to see their living situations.

In all, about $91 billion in reparations has been paid, according to Greg Schneider, executive vice president of the Claims Conference. He told JNS that, nearly every day, he hears of unspeakable horrors and atrocities that took place during the Holocaust. He said there have been times when he “welled up” in tears and, as negotiator Saul Kagan says in the film, he feels that the souls of both the survivors and those who were murdered are in the room when he negotiates.

A panel following the screening was moderated by Rebecca Jarvis, an ABC News reporter and host of a popular podcast about Elizabeth Holmes called “The Dropout.” She noted that two-thirds of young adults in America are not aware that six million Jews were killed in the Holocaust.

She was joined by Foxman and Grossman, as well as Schneider, who appears in the film, as does Prof. Michael Berenbaum, who specializes in Holocaust studies at American Jewish University in Los Angeles.

Foxman said the message of the Holocaust is “not that people can do evil. We know that. What’s more important is that people can make a difference if they stand up and act.”

He said the film teaches that there is hope.

Alluding to but not mentioning Elon Musk’s acquisition of Twitter, he spoke about the need for a balance between freedom of speech and civility. He lamented that American schools might have nothing more than a paragraph or a sentence on the Holocaust in their curricula.

Grossman told the crowd that the Claims Conference has found that books are an effective way to educate about the Holocaust, but films are the most powerful tool for intellectually and emotionally impacting people—especially when it comes to sharing survivors’ stories.

Schneider discussed a survivor who speaks at schools and has difficulty sleeping for three nights before and three nights after each speech.

“If she does that at 90-years-old, we cannot relent, no matter what problem we have,” Schneider said. “We always say, ‘Survivors were abandoned in their youth.’ … Theycannot be abandoned now, and we will never abandon them.”

Berenbaum praised former German Chancellor Angela Merkel for embracing the goal of “creating a Germany that was antithetical to Nazism” and survivors for their resilience, building newfound happiness out of the shadows of horror.

“It’s the ultimate lesson of the Jewish people,” Berenbaum said. “In the aftermath of destruction, we do not accept death as the final word, but the responsibility to rebuild, to renew, to transform and to grow.”