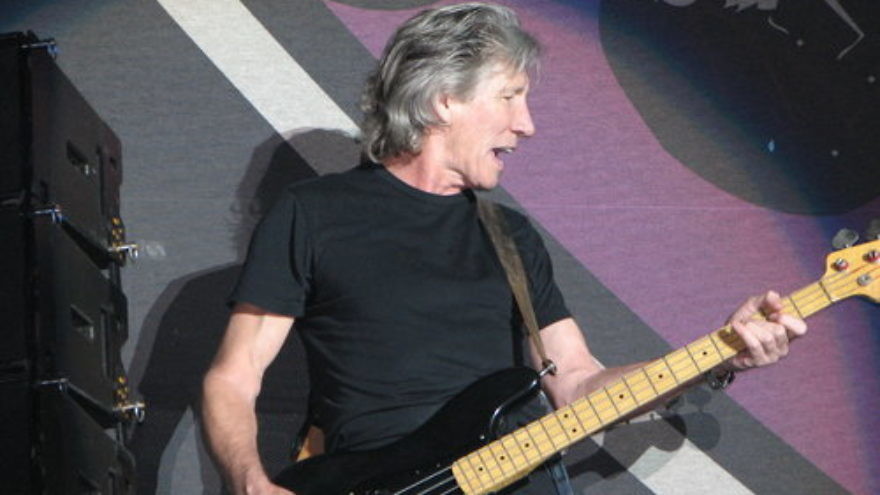 Waters—who has compared the Israeli government to Nazi Germany and has claimed the “powerful Jewish lobby” runs the media—is arguably the most vocal figure behind the anti-Israel BDS movement. He is also the most prominent voice in pressuring other artists to boycott performances in the Jewish state.

Leading Jewish groups, such as the Anti-Defamation League and the Simon Wiesenthal Center, have noted the rocker repeatedly promotes conspiratorial anti-Semitic views and exploits Jewish symbols to promote Jew-hatred.

“What Roger Waters is doing is espousing hatred, vitriol and extreme prejudice against Israel and the Jewish people…if he’d been doing this against any other race he’d be stopped,” New York Times bestselling author Halperin, the film’s producer, told JNS.org.

The film’s name is a wordplay on the title track on Pink Floyd’s 1975 album, “Wish You Were Here.”

“Shame on corporate America for supporting this purveyor of hatred and anti-Semitism. Corporate America should be ashamed…and look in the mirror and realize that this is not 1938,” Halperin said.

Halperin—the son of a Holocaust survivor—embarked on what he referred to as a “two-year odyssey,” traveling the world to produce the film. In addition to highlighting Waters’s many anti-Semitic and anti-Israel statements, Halperin’s movie also strives to expose the broader BDS movement as a wholly anti-Semitic campaign.

“BDS activists seek to conflate legitimate criticism of Israel with the delegitimization of Israel in the international arena,” B’nai Brith Canada CEO Michael Mostyn told JNS.org. “By exploiting the rhetoric of ‘human rights,’ ‘social justice’ and other universal moral principles, BDS activists portray Israel as inherently racist, thereby calling into question the very existence of the Jewish state, seeking to cast it as a pariah among nations.”

The initiative to screen the film was organized after B’nai Brith’s leadership learned—halfway through the editing process—that the movie features never-before-seen interviews with some of the world’s leading experts on anti-Semitism, such as Pope Francis, Alan Dershowitz, Natan Sharansky and Ronald Lauder. “Wish You Weren’t Here” also features interviews with artists and luminaries like Paul McCartney, Elton John and Tony Blair.

“What motivated B’nai Brith to get involved [with screening Halperin’s film] is the chance to promote awareness that the BDS movement is inherently anti-Semitic, and that its supporters, like Roger Waters, strengthen the campaign that seeks Israel’s destruction,” said Mostyn.

“Whatever definition of anti-Semitism you abide by…Roger Waters is most certainly guilty,” he said, adding the “Wish You Weren’t Here” tour is B’nai Brith’s “protest against Waters” and “our chance to educate the public that he is promoting hatred against the only democracy in the Middle East.”

“Wish You Weren’t Here” premieres in Toronto Monday. B’nai Brith is set to hold screenings of the film in Canadian cities on the same nights as Waters’s performances in those cities—Quebec City (Oct. 8), Ottawa (Oct. 10), Montreal (Oct. 16), Winnipeg (Oct. 22) and Edmonton (Oct. 25)—“in order to counter his inflammatory rhetoric against Israel and the Jewish people,” said Mostyn.

The film will also be screened in U.S. cities and in Israel following its Canadian debut.

“It starts with Roger Waters, but it’s all about contemporary anti-Semitism, which is thriving and the world is turning a blind eye,” Halperin said. “There’s no place for this in today’s world….It’s time to call a spade a spade.”