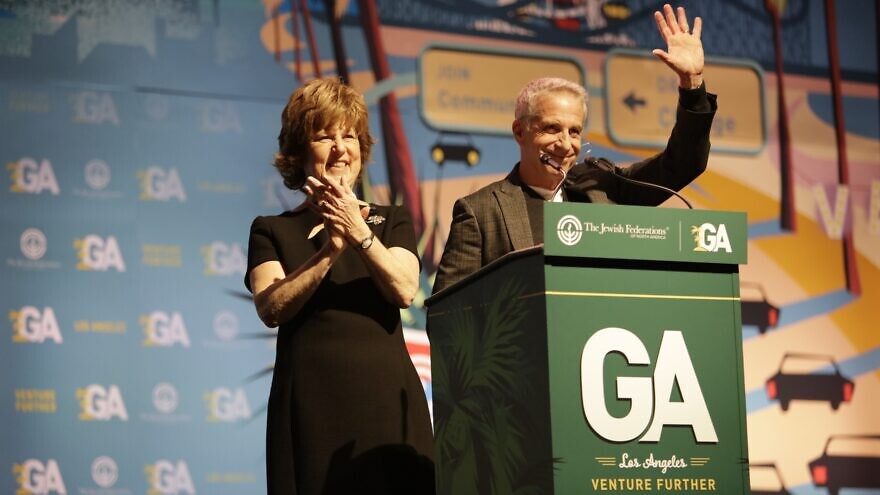 Julie Platt, the new chair of the Jewish Federations of North America's board of trustees, with her husband Marc, at the General Assembly in 2017. Credit: Courtesy, JFNA.
Republish this article
1315 WORDS
Spread the word.
Help JNS grow!
Share now:

(February 22, 2022 / JNS) She’s taking over a powerhouse of American Jewish fundraising. And she hasn’t seen her predecessor in two years.

Transitioning into post-pandemic Jewish life will be among the major challenges for the Jewish Federations of North America’s new chair of the board of trustees. But Julie Platt says it can only happen successfully if the Jewish community feels secure.

The JFNA—representing 146 Jewish Federations and 300 independent Jewish communities across North America—announced on Feb. 15 that Platt would assume the leadership of the umbrella body that in 2019 raised $270 million. Only the second woman to lead the organization, Platt is a former banker who has focused on promoting Jewish education and helping to rescue the Jewish camp movement during the pandemic. Platt serves as JFNA’s national campaign chair and chair of LiveSecure, the organization’s initiative to broaden and deepen the security umbrella for the communities JFNA serves.

“This is the largest campaign JFNA has ever undertaken, but it’s also the largest campaign in American Jewish history for any security initiative, and it’s required at this moment,” Platt tells JNS. “We knew it before Colleyville. We were sort of waiting for what, sadly, would be the next place, the next Jewish address that would be under attack. But now we have no choice. And this is what JFNA is poised to do: to convene, to galvanize resources, to send them out into the system.”

She continues, saying “we’ve raised, or are to actually exceed our goal to raise, a national fund that will be matched locally, that will literally provide grants for security. We need to be at the front of that advocacy because honestly, how can you flourish as a Jewish community if you’re afraid to go into a synagogue or Jewish community center? I don’t want to have to focus on anti-Semitism and on hate. I want to focus on ensuring a Jewish future and engagement. But we have to do the first so that we can ensure the second.”

Platt has served as chair of the Jewish Federation of Greater Los Angeles, chair of the Foundation for Jewish Camp, on the Advisory Board of the Jewish Future Pledge and on the board of trustees of her alma mater—the University of Pennsylvania—and Penn Hillel’s National Board of Governors.

Platt tells JNS that she has just begun to think about what her goals are going to be beyond LiveSecure, which she says she will continue to spearhead. She says will be focused on strengthening Israel-Diaspora relations—always a hot topic in the American Jewish community and a relationship some say was particularly strained during the distancing brought on by the pandemic. She also plans to work on efforts to support and build JFNA’s leadership pipeline, which has been ravaged by the effects of the last two years.

“We’re in a position right now with Nachman Shai as the Israeli Minister of Diaspora Affairs and Isaac Herzog as the president of Israel—both of whom come from a life in the Jewish Agency—to have a unique and wonderful opportunity to put this in the very front focus. I look forward to engaging in that conversation in a much more active way,” says Platt.

“I feel that there is a cost of having not seen each other and been with each other and been back and forth to Israel as we most normally do,” she adds. “I mean, I think it’s significant that on his first official trip to the United States, Prime Minister Naftali Bennett asked to be hosted by the Jewish Federations of North America. I feel the distance has been impacted by the pandemic, and I think we will feel the closeness that we need by being back in each other’s company and convening not over Zoom.”

Platt acknowledges the new community reach that Zoom has brought the federations as a plus, but it has come at a cost for JFNA’s progress.

“I cannot wait to convene in person. I actually had the opportunity to see Mark Wilf [JFNA’s current chair of the board of trustees, who Platt will replace in June] this last weekend. We could not believe that we have not seen each other in two years; I work with Mark every single day and I had not seen him. There’s nothing to replace what human interaction is like in the hallways walking to and from a meeting, sitting for a meal together. We’ve lost that kind of intimate conversation, which actually results in creativity and innovation that isn’t always captured in a Zoom room.” 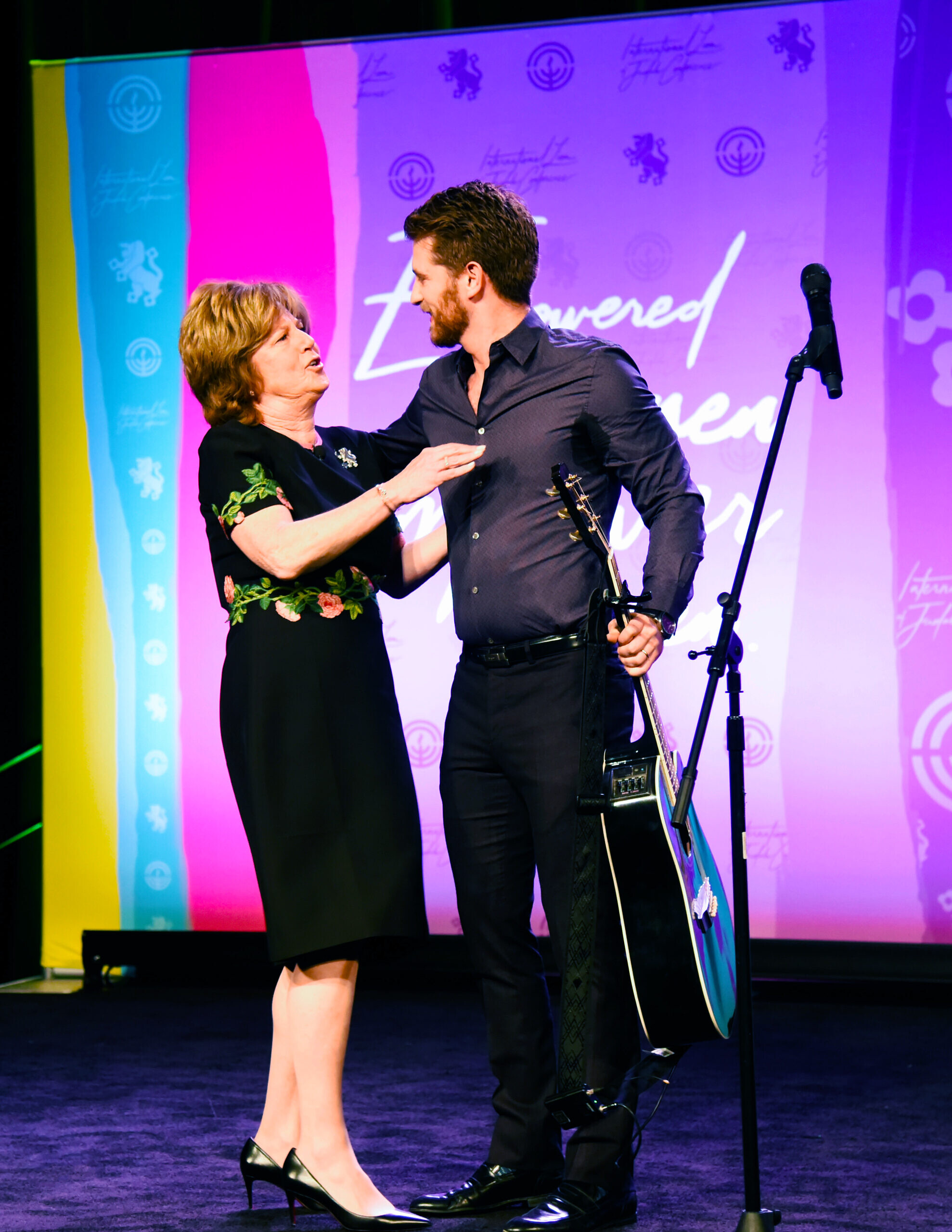 Julie Platt, the new chair of the Jewish Federations of North America’s board of trustees, with her son Jonah in Hollywood, Fla., in 2019. Credit: JFNA.

‘Plug them into a leadership pipeline’

Platt notes that JFNA hopes to convene in person in October at its General Assembly in Chicago, and is planning a massive General Assembly in Israel for its 75th birthday next April in conjunction with individual federation communities that are planning missions to Israel at the same time. Next month, JFNA will send its National Young Leadership Cabinet—the organization’s young leadership pipeline of JFNA—to Israel on what is believed to be the first large-scale mission of a Jewish organization since the pandemic started. Developing and maintaining a leadership pipeline will be among Platt’s most critical tasks, she says.

“One of the new things that will really be an opportunity that has come from within JFNA is this very strong focus on a lay leadership pipeline and on the professional Jewish communal service journey,” says Platt. “Those are two things that I need think need more attention. How do you help a lay leader, whether they’re at the beginning of their journey, whether they just completed a very significant position and whether they come to us in the middle of changing careers, that gave them more opportunity to serve. How do you plug them into a leadership pipeline with intentionality, so nobody falls off feeling unappreciated or unwelcome?

“And coming out of this pandemic to have been a nonprofit, Jewish communal professional, I think everyone is exhausted beyond belief,” she notes. “We don’t want to lose those professionals because what they did is help us survive the pandemic, and that’s what Jewish communal service workers have done. And we need to make sure that they are appreciated; that they are recognized; and that they feel supported, developed and thoughtfully set upon a professional journey to keep them and hold on to them in the nonprofit Jewish world.”

Platt said she will rely heavily on her leadership team, including vice chair David Brown of Chicago; treasurer Suzanne Grant of Wilmington, Del.; and Secretary Neil Wallack of Boston, all of whom Platt credits as being “phenomenal, seasoned, experienced, smart leaders.” She says she will carry on Wilf’s passion for supporting JFNA’s Holocaust-survivor community, noting that Wilf helped reinvigorate JFNA’s national campaign to support those survivors.

She told JNS that her notable Hollywood family—husband Marc, who is an entertainment producer; son Ben, who starred in the “Pitch Perfect” film series and debuted the eponymous role of “Dear Evan Hansen”; and son Jonah, a well-known an actor, musician and producer, along with her three other children—will all continue to be heavily involved in communal Jewish life and support JFNA’s efforts.

“My parents were engaged in Federation life in Wichita, Kansas. I literally was born with a pledge card in my hand. So I very much have been on this journey my whole life,” she notes.

“I have found great meaning and serving the Jewish community. I’m appreciative of the opportunity to set this example, for my children and six grandchildren,” she says. “And I want them to see that helping the Jewish world and ensuring a Jewish future can provide enormous meaning to your life, and it has for me for sure.”