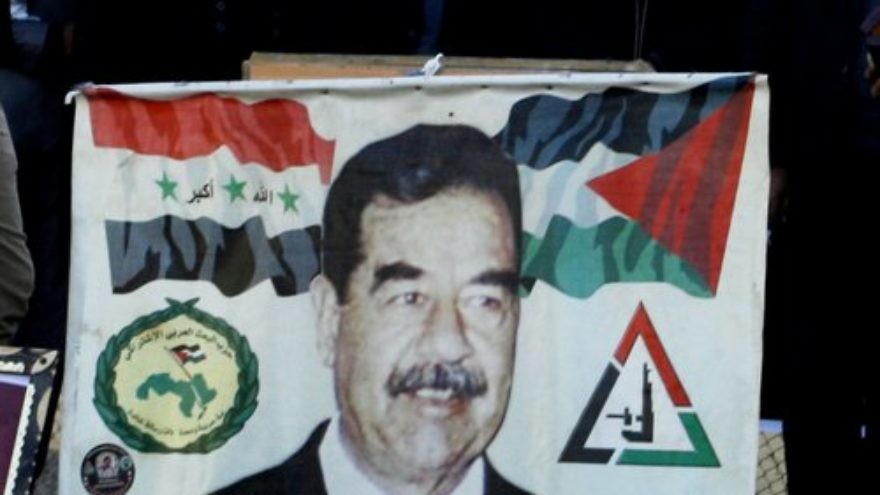 (October 29, 2017 / JNS) The unveiling of another statue of Saddam Hussein in Palestinian Authority (PA)-controlled territory is “a poke in America’s eye” and “an impediment to peace,” ex-diplomats and American Jewish leaders say.

The Associated Press (AP) reported on Oct. 23 that a large statue of the late Iraqi dictator was recently unveiled on a major thoroughfare in the PA city of Qalqilya, with district governor Rafea Rawajbeh in attendance. The AP noted that there are statues of Saddam in “several other Palestinian towns” as well.

According to Itamar Marcus, director of Palestinian Media Watch, there is also a “Saddam Hussein Square” in both Jenin and the PA’s de facto capital of Ramallah, and a “Martyr Saddam Hussein School” in the PA village of Yaabad. Ori Nir, spokesman for Americans for Peace Now, told JNS.org that during a visit to the area last year, he saw a Saddam statue “on the northern outskirts of Ramallah.” On an earlier visit, Nir said, he saw a Saddam monument in a village near Ramallah.

Baker—who has also served as the deputy director-general of Israel’s Foreign Ministry—recalled that during his years as a diplomat, neither the Clinton, Bush nor Obama administrations ever seriously protested anti-American statements or actions by the PA.

“That gave the PA the feeling that it had a ‘green light’ to continue such behavior,” Baker said.

Rep. Peter Roskam (R-Ill.), co-chair of the House Republican Israel Caucus, told JNS.org that he is “appalled, but not surprised that leaders of the Palestinian Authority would honor Saddam Hussein, a war criminal responsible for the deaths of thousands of U.S. troops.” Roskam added, “These same Palestinian leaders regularly incite, reward, and memorialize terrorists with Israeli and American blood on their hands. President [Mahmoud] Abbas and his government need to decide whether they stand with us in the fight against terrorism or prefer to foster a barbaric and terror-loving society.”

A total of 4,791 American soldiers were killed fighting against Saddam Hussein in the Gulf War of 1990, and in the Iraq War of 2003 and its aftermath.

American Jewish leaders are strongly criticizing the PA’s continued embrace of Saddam. “The placing of this [latest] monument tells you everything you need to know about those who made the decision,” Daniel S. Mariaschin, CEO of B’nai B’rith International, told JNS.org. “Saddam brutalized his people, killing many thousands, including  using  chemical weapons. Venerating a dictator like Saddam speaks to the depravity of those who chose to ‘honor’ him.”

AIPAC spokesman Marshall Wittmann said in a statement to JNS.org that the Saddam statues are “incitement to violence” and “impediments to peace.”

To erect a statue of Saddam “is to advertise one’s moral bankruptcy,” said a leading Conservative rabbi, David Wolpe of Temple Sinai in Los Angeles. “The U.S. government should protest this outrage in the strongest terms.”

Yoram Ettinger, a former minister for congressional affairs at the Israeli Embassy in Washington, is urging the Trump administration to examine the PA’s use of the $357 million it received from the U.S. last year.

“At a time when the U.S. is struggling with its own budget and cutting many domestic programs, the PA is using American taxpayers’ money for schools, squares, and statues honoring one of America’s most barbaric enemies,” Ettinger told JNS.org.

Ettinger said the PA’s affection for Saddam as well as dictatorships such as Iran, Cuba and North Korea “is a clear indication of the anti-U.S. direction which would be assumed by a Palestinian state.” Such a state would be “another anti-U.S. Arab entity which would destabilize the Middle East, and fueling subversion and terrorism, threatening vital American interests.”

Peace Now’s Nir disagrees. While he “dislikes the choice” of Saddam as an object of veneration, Nir believes that the creation of a Palestinian state “should not be contingent on changing the hearts and minds of Palestinians.” Nir told JNS.org that Israel should reach a “contractual peace agreement” that would include a Palestinian state in most of the territories and part of Jerusalem, and “hopefully, an agreement would gradually change attitudes.”

Sarah Stern, president of the Endowment for Middle East Truth, said Nir’s position “would be playing roulette with Israel’s very existence.” If a Palestinian state is established, “Israel will be just nine miles wide and incredibly vulnerable,” Stern said. “We can’t just hope that the Palestinians gradually become peaceful. They have to prove that they have genuinely changed their ways before anyone starts asking millions of Israelis to risk their lives on that kind of gamble.”

According to Palestinian Media Watch, there are many other sites, institutions and events in PA territory that are named after Saddam, including a monument in Beit Rima, a neighborhood in Vadi Barkin, a district branch of the Fatah movement in Jenin and a soccer tournament in Tulkarm. In 2005, the U.S. provided $402,000 to pave the main street in the town of Yaabad; two years later, the street was named after Saddam, in order to “emphasize the values of Arabness and Jihad,” according to the Yaabad municipality.