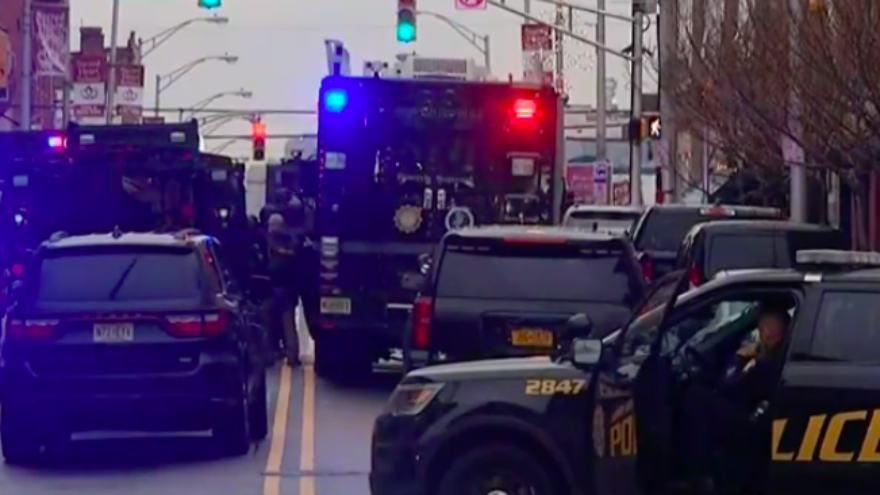 The scene near a kosher market in Jersey City, N.J., after a shooting on Dec. 10, 2019. Source: Screenshot.
Spread the word.
Help JNS grow!
Share now:

(December 12, 2019 / JNS) Following Tuesday’s shooting at the JC Kosher Supermarket in Jersey City, the New York Police Department has established a unit to deal with extremism.

In an announcement on Wednesday, New York City Mayor Bill de Blasio said the Racially and Ethnically Motivated Extremism (REME) unit will be “focused on any trends, and any signs of racially and ethnically motivated extremism” and “will directly take on the hate groups that are trying to spread in this country and pose a threat to so many communities.”

John Miller, the deputy commissioner of intelligence and counterterrorism for the NYPD, said REME has been underway for several weeks and will consist of around 25 NYPD “detectives, intelligence bureau analysts and partners from outside agencies, focusing on rooting out hate speech networks before acts materialize,” reported SILive.com.

The Conference of Presidents of Major American Jewish Organizations applauded the new unit, saying “it will further advance the ongoing efforts against anti-Semitism and all forms of racism,” the organization sent out in a statement.

“The NYPD has been at the forefront of these efforts and has been responsive to the needs of religious and ethnic communities in New York,” it continued. “The REME unit will take a proactive approach in monitoring extremism so that preemptive action can be taken to anticipate and prevent bias incidents.”