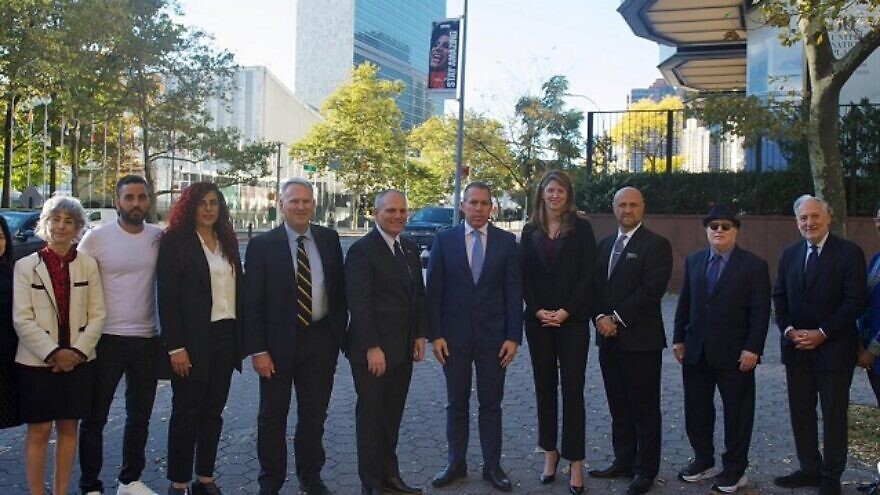 (October 27, 2022 / JNS) As the United Nations prepared to hear the results of the Human Rights Council’s Commission of Inquiry, which many are calling a demonization of the Jewish state, the parents of a 5-year-old boy who died during a Hamas bombing told their story to the media gathered outside the U.N. building in New York.

“Have you ever broken a promise you made to your child?” asked Asaf Avigal. “Have you ever had to bury your own child because you didn’t keep your promise? In my case, that’s exactly what happened.”

Avigal’s son, Ido, was hiding with his family in a safe room when he was hit and killed by shrapnel from a Hamas rocket in May 2021.

A day before Ido was “killed, murdered by Hamas,” Avigal said that his young son was terrified of the endless rockets and siren. “He asked me, ‘Daddy, what would happen if we couldn’t get to the shelter in time when the rockets came?’ I answered, ‘As long as you are with me you are safe.’ That was the broken promise I made to my child. My greatest wish is that you will be able to protect your kids and families.’”

The U.N. Human Rights Council created the “Commission of Inquiry on the Occupied Palestinian Territory, including East Jerusalem, and Israel” in spring of 2021 after Hamas sent more than 4,000 t rockets raining down on Israeli towns and cities, leading to the Israel Defense Forces’ Operation Guardian of the Walls. The COI was conducted by three individuals—Navi Pillay, Miloon Kathari and Chris Sidoti—each of whom had previously demonstrated anti-Israel bias. The COI has no end date for its investigation and its research goes back decades to the founding of the State of Israel.

Noting that the final COI report, doesn’t mention Hamas or terrorism, yet vilifies Israel, Avigal said, “Apparently, not the rights of all humans are protected there.”

Ido’s mother, Shani, recounted the moment when the rocket crashed into the building next to them sending shrapnel crashing into their safe room. “Ido was hit in the head, chest and belly … I was severely injured by shrapnel.

“I tried to save my little boy,” she said. “I stepped over burning shards and glass and ran to my neighbors, but they didn’t hear me because they were in their own bomb shelter. I called the police and said my son and I are dying.”

Though Shani Avigal recovered and has visible scars on her body, she said the biggest scar is the memory of “holding my dead son’s body. It causes me to hear screams in the middle of the day. … Ido was a bright funny kid with a deep soul. He dreamed of being an astronaut and meeting aliens. … He was not a shahid,” she said, using the Arabic word for martyr. “He didn’t know what hate was. He wasn’t a soldier, only a 5-year-old boy defending himself with his bare hands.”

The Avigals spoke during a press conference hosted by the Israel education organization StandWithUs that was co-sponsored by dozens of Jewish, Israeli and pro-Israel organizations.

Other speakers included Israeli Ambassador to the United Nations Gilad Erdan; William Daroff, CEO, Conference of Presidents of Major Jewish Organizations; Eric Fingerhut, president and CEO of the Jewish Federations of North America; Rabbi Eric J. Greenberg, director of United Nations Relations & Strategic Partnerships and the Simon Wiesenthal Center; Pastor Robert Stearns, founder of the Eagles’ Wings Ministries and president of the Israel Christian Nexus; Olga Meshoe Washington, a South Africa native and board member at the Institute for Black Solidarity with Israel; Col. Richard Kemp, a retired British Army Commander; professor Anne Bayefsky, who directs the Touro Institute on Human Rights and the Holocaust and is the president of Human Rights Voices; and Carly Gammill, founding director of the StandWithUs Center for Combating Antisemitism.

Sarri Singer—an American who was injured in and survived a Hamas bombing of Bus No. 14 in June 2003, and founded Strength to Strength, a group that assists victims of terror—also spoke. She recounted her experiences boarding the very crowded bus and finding only two seats left. She took the one by the window. Everyone sitting and standing around her died in the blast, which injured more than 100 people and killed 17 Israelis.

“The Human Rights Council is an oxymoron, an abuse of its impressive name. It ignores the voices of victims while obsessively and relentlessly attacking the world’s only Jewish state,” she said.

“It is sad that it needs to be said, but it is time for human rights council to stand up for actual human rights as opposed to excusing murder and terrorism,” Singer continued. “Let’s send a clear message today to the U.N. and all good people who truly care about human rights. Darkness will never extinguish light. Evil never defeat good. And we will continue to fight back and speak our truth over and over again until someone hears us.”