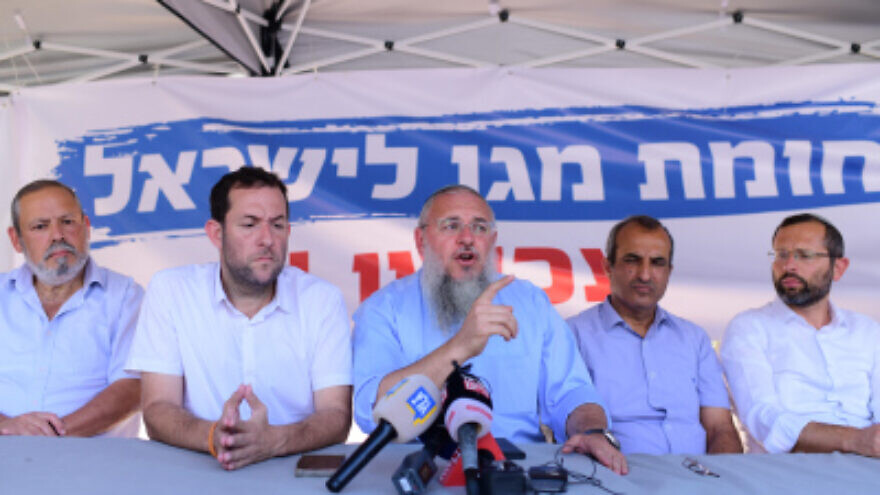 Judea, Samaria and the Jordan Valley heads of councils attend a press conference of the Yesha Council outside the home of Minister of Defence Benny Gantz in Rosh Haayin, October 3, 2022. Photo by Tomer Neuberg/Flash90
Spread the word.
Help JNS grow!
Share now:

(October 6, 2022 / JNS) At a protest outside Israeli Defense Minister Benny Gantz’s home in Rosh Ha’ayin on Thursday afternoon, hundreds of residents of Judea and Samaria and the Jordan Valley implored the government to launch a military operation to put an end to the recent wave of Palestinian terrorism.

“The residents of Judea and Samaria have been abandoned. We’re here now to tell Defense Minister Benny Gantz—enough! We deserve security, and this is your responsibility to ensure,” Binyamin Regional Council head Yisrael Gantz told the crowd at the protest, Arutz Sheva reported.

Shlomo Ne’eman, head of both the Yesha Council and the Gush Etzion Regional Council, said, “We don’t have equal rights as citizens, and now the enemy is rearing its head because the government lets it do so. The prime minister talks about two states, about a Palestinian state.”

“The defense minister himself has revived the Palestinian Authority of unblessed memory. This is a terrorist and dictatorial organization that harms Arabs and shoots at Jews,” added Ne’eman, according to the report.