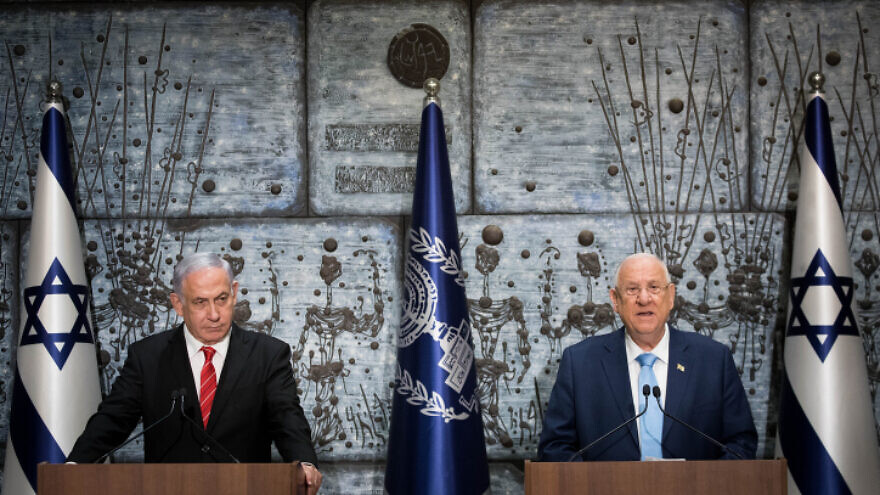 Israeli President Reuven Rivlin presents Prime Minister Benjamin Netanyahu with the mandate to form a new government after the results of the country's general election were announced, at the President's Residence in Jerusalem on Sept. 25, 2019. Photo by Yonatan Sindel/Flash90.
Spread the word.
Help JNS grow!
Share now:

(November 8, 2020 / JNS) Israel’s president and prime minister on Sunday congratulated Joe Biden on his election as the 46th president of the United States and conveyed messages of gratitude to U.S. President Donald Trump.

“I send the blessings of the Israeli people and of the State of Israel to our friend Joe Biden on your election as the 46th President of the United States of America. I also send congratulations and best wishes for your success, Vice President-elect Kamala Harris,” Israel’s President Reuven Rivlin said in a statement.

Relations between Israel and its “closest and most important ally” were stronger than any political leadership, and were “rooted deeply in our shared values” and “commitment to freedom and democracy,” he said.

The Israeli president thanked Trump for “four years of partnership in strengthening Israel’s security,” and the American people for their “steadfast support and friendship.”

Israeli Prime Minister Benjamin tweeted: “Congratulations @JoeBiden and @KamalaHarris. Joe, we’ve had a long & warm personal relationship for nearly 40 years, and I know you as a great friend of Israel. I look forward to working with both of you to further strengthen the special alliance between the U.S. and Israel.”

The Israeli premier added, “Thank you @realDonaldTrump for the friendship you have shown the state of Israel and me personally, for recognizing Jerusalem and the Golan, for standing up to Iran, for the historic peace accords and for bringing the American-Israeli alliance to unprecedented heights.”

Rivlin concluded his statement by wishing Biden and his future administration great success “on behalf of the Israeli people,” and extending an invitation to visit Jerusalem.