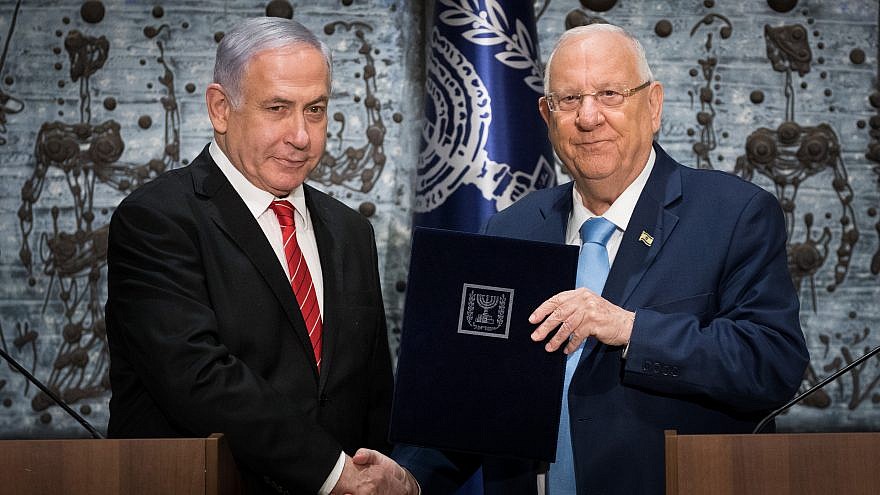 Israeli President Reuven Rivlin presents Israeli Prime Minister Benjamin Netanyahu with the mandate to form a new government, after the results of the country's votes were announced following the Sept. 17 elections, at the President's Residence in Jerusalem on Sept. 25, 2019. Photo by Yonatan Sindel/Flash90.
Republish this article
409 WORDS
Spread the word.
Help JNS grow!
Share now:

In his address, Rivlin said that Netanyahu, who has the backing of 55 Knesset members, six short of a majority, has a higher chance than Blue and White leader Benny Gantz, who had the backing of 54 MKs, but only 44 who would actually sit in his government, to form the next government.

“The chance of the prime minister to form a coalition is higher,” he said.

The move comes after a push for Netanyahu, and Blue and White Party leader Benny Gantz, to form a unity government. Gantz and Netanyahu met twice this week at the invitation of Rivlin to work out a unity deal, but those efforts appear to have failed so far.

In his address, Netanyahu reiterated the call for unity.

“We won’t be able to form a government unless we do it together,” Netanyahu said in his remarks alongside Rivlin, citing security, diplomatic and economic reasons as well as a peace process initiated by the Trump administration. “The nation needs to be united and prepared.”

Netanyahu has 28 days to form a majority government of 61 seats, but still has no clear path to that number with only 55 members endorsing the Israeli leader so far.

At the same time, Netanyahu also face possible indictments in three corruption cases. A special hearing with the attorney general has been set for Oct. 2.

Rivlin suggested the possibility of electoral reform which would give more power to an acting prime minister should the sitting one need to recuse themselves such as in the case of an indictment.

Nevertheless, Gantz rejected such a proposal.

“Blue and White will not sit in a government whose leader is under indictment,” he said in a statement. “This issue, along with other essential issues, are more important to us than any discussion on distributing ministerial portfolios or a rotation.”

Netanyahu, who is Israel’s longest-serving prime minister, was also selected by Rivlin to form the previous government after the April election. However, Netanyahu’s efforts failed after Avigdor Lieberman, who heads the Yisrael Beitenu Party, refused to sit in a government with ultra-Orthodox parties, thrusting Israel into a second election this year.