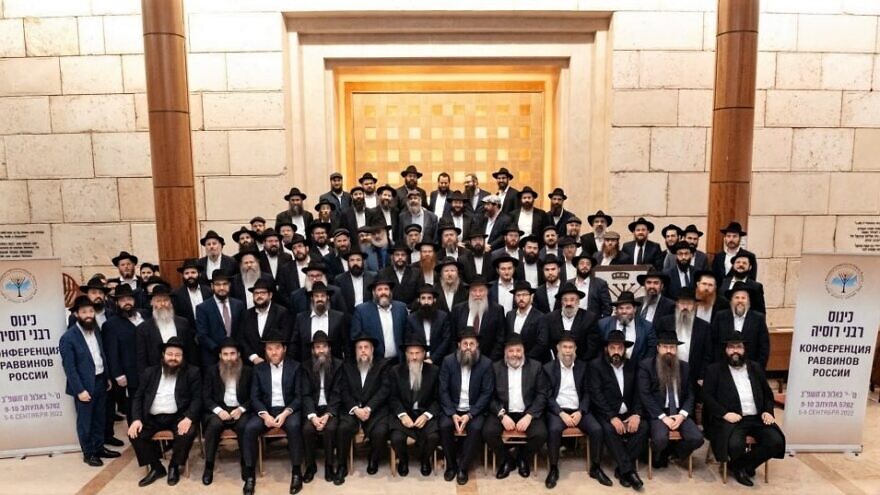 Rabbis in Russia called for an end to the war in Ukraine during an emergency conference held in Moscow on Sept. 5, 2022. Credit: Federation of Jewish Communities of Russia.
Spread the word.
Help JNS grow!
Share now:

(September 7, 2022 / JNS) Rabbis in Russia called for an end to the war in Ukraine during an emergency conference held in Moscow on Monday.

“We pray that no more blood be spilled, and call upon people of good conscience everywhere to help aid those in need, including refugees, and end the suffering,” the rabbis said in a resolution. “We pray together that very soon the prophecy of Isaiah will be fulfilled, that ‘nation shall not lift the sword against nation, neither shall they learn war anymore.’ ”

More than 75 rabbis attended the gathering, which was organized by the Federation of Jewish Communities of Russia.

Those who addressed the conference included Chief Rabbi of Russia Berel Lazar; Rabbi Alexander Boroda, president of the Federation of Jewish Communities of Russia; and Israel’s Ambassador to Russia Alexander Ben Zvi. The ambassador also read a letter from Israeli President Isaac Herzog, who commended the spiritual leaders for staying devoted to serving the Jewish community in Russia and showing “remarkable strength” amid their country’s ongoing war with Ukraine.

“We, the Jewish leaders, have always stated that peace is one of the highest values of Judaism, while conflict and bloodshed are the exact opposite of it, destroying human destinies, forcing people to leave their homes and lose ties with each other. And we must daily pray for peace and try to restore respectful dialogue among people as best we can,” Boroda said in a speech.