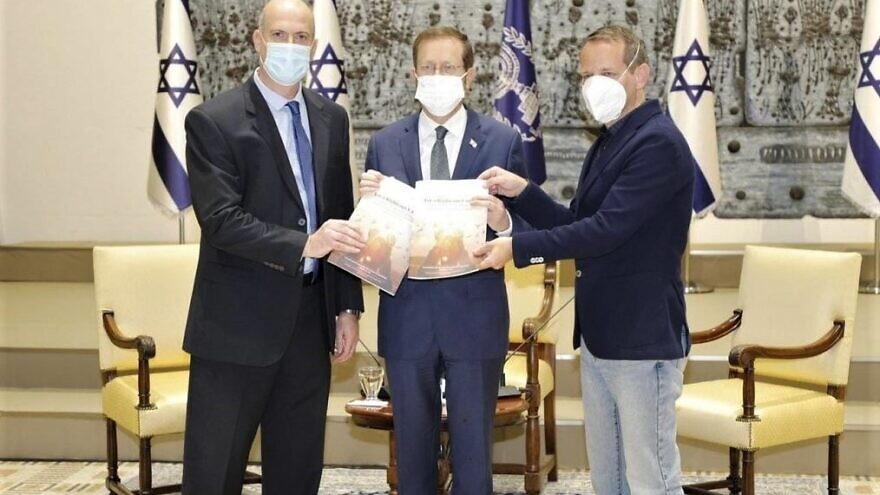 (January 27, 2022 / JNS) The Kantor Center for the Study of Contemporary European Jewry at Tel Aviv University presented an inaugural report on “Positive Trends in Fighting Anti-Semitism and Radicalization around the World” to Israeli President Isaac Herzog on Thursday, which is International Holocaust Remembrance Day. For more than a decade, the Kantor Center team has published, on the eve of Holocaust Memorial Day in Israel, annual reports on the state of anti-Semitism in the world.

This more encouraging report was presented at a Jerusalem ceremony to mark the occasion, which commemorates the day that Auschwitz was liberated in 1945.

“The global anti-Semitism crisis is escalating, but the international fight against it is also intensifying,” said Herzog. “Strengthening the light is just as important as fighting darkness.”

The report focused on several areas of progress in the fight against anti-Semitism, including the legal, political and legislative, cultural and Middle Eastern arenas. Each section includes recommendations for how existing work can be further improved.

Kantor Center head Professor Uriya Shavit told JNS that his center decided to publish the new study for three reasons: Expressing appreciation for those already active in the fight against anti-Semitism; impelling more governments and organizations to initiate similar activities; and promoting a discussion on concrete proposals for enhancing existing efforts.

Striking developments in the attitudes of the United Arab Emirates and Bahrain towards Jews were observed in 2021, said Shavit, likely a result of the Abraham Accords that were signed in September 2020.

The report highlights some of these efforts, including the erection of a Holocaust memorial exhibition titled “We Remember”—the first of its kind in the Arab world—at the Crossroads of Civilizations Museum in Dubai in May 2021.

A joint religious complex including a mosque, church and synagogue is being built in Abu Dhabi; it’s expected to be complete this year. The houses of prayer will have a similar height and facade but be designed internally to fit the needs of each religion. The complex is meant to signify harmony alongside diversity.

Also, the House of Ten Commandments synagogue in Manama, the capital of Bahrain, was reopened last March following a comprehensive restoration. A few months later, in August, the first celebration of Shabbat services since the late 1940s was held in the country.

“These events in the Arab world are for me the biggest breakthroughs that took place this year,” said Shavit.

The center recommended increasing Holocaust education in the region, which Shavit said could be “managed by Jewish people and Jewish organizations but in no way should be linked to the narrative of the Israeli-Palestinian conflict.” 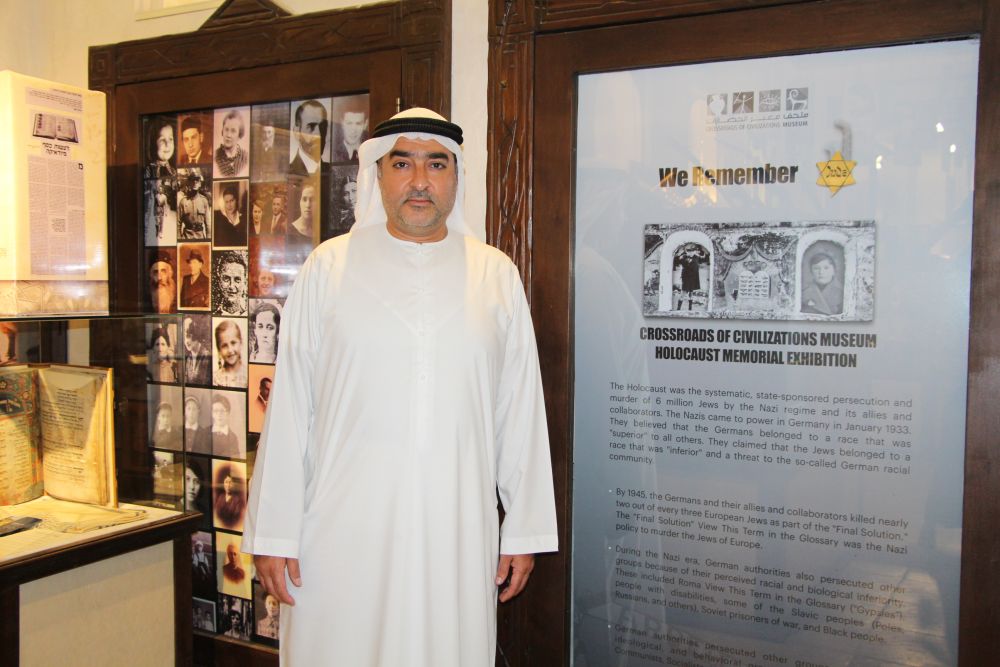 Also during the past year, efforts have continued by young people from Poland to Ukraine to restore Jewish cemeteries and reconnect to their country’s Jewish history.

Restoration of the Warsaw Jewish Cemetery, established in 1806, is taking place with the support of the Polish Ministry of Culture, and in collaboration with local rabbis and the Cultural Heritage Foundation.

In the city of Sosnowiec, Poland, a non-Jewish resident took it upon himself to raise funds and recruit high school students to mow the grass at the rundown local Jewish cemetery.

And in the Ukrainian town of Rohatyn, non-Jewish residents and volunteers from around the world are working to restore the local Jewish cemetery and research the history of Jews in the region.

One idea to support these efforts, offered Shavit, would be to establish a central website that would provide a framework for Jewish cemetery restoration and acknowledge those who are taking part in the efforts.

In the sports arena, two major European soccer clubs—the German Borussia Dortmund and the Dutch Feyenoord Rotterdam—partnered with the Anne Frank House to develop guidelines for tackling anti-Semitism among players and fans. 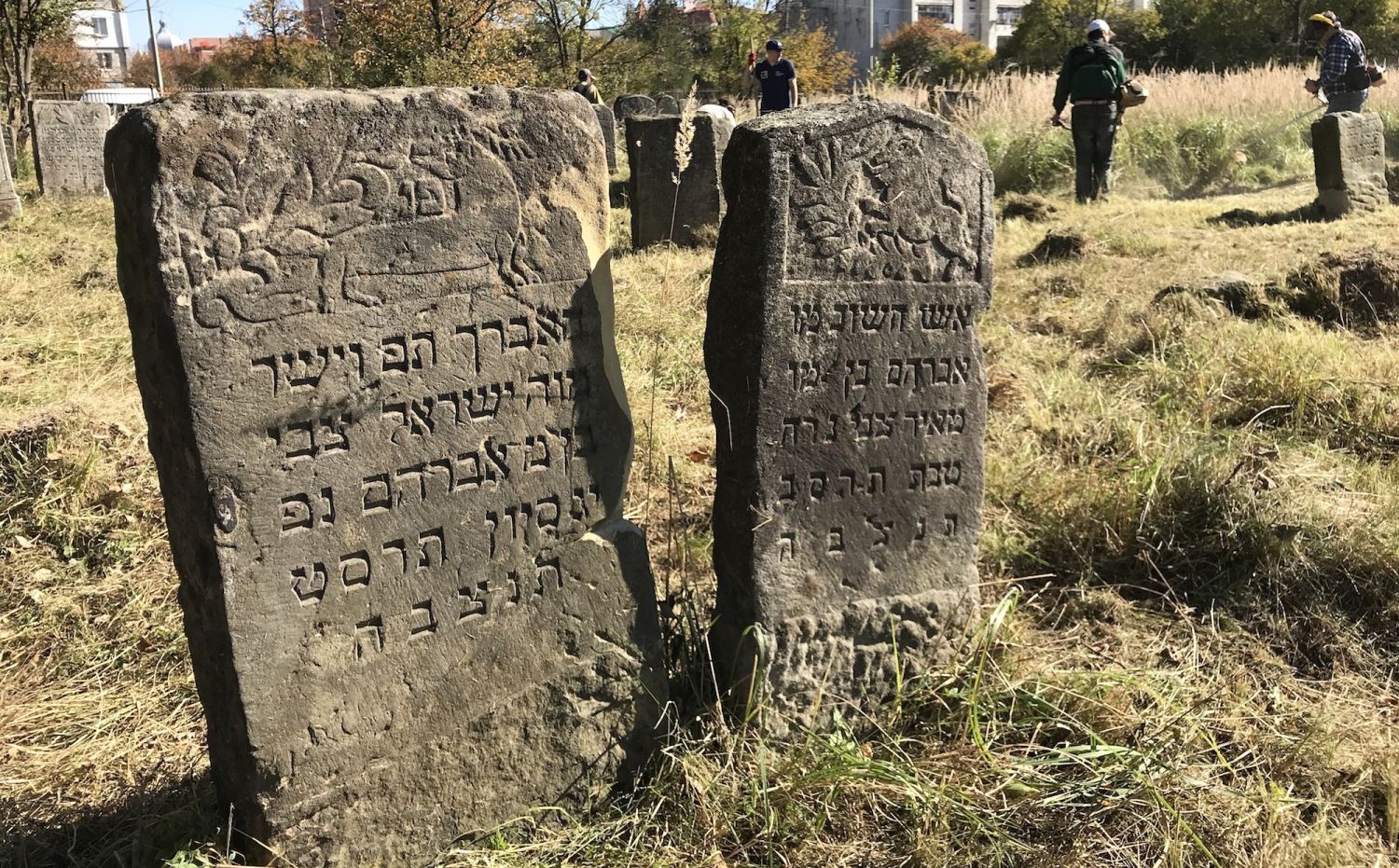 A restoration project at a Jewish cemetery in Ukraine. Credit: Rohatyn Jewish Heritage.

In the United States, basketball star Meyers Leonard was fired after anti-Semitic slurs he made during a video game.

The European Commission expanded the “EU Crimes” list to include hate speech and hate crimes. Also in the European Union, the “Strategy on Combating Anti-Semitism and Fostering Jewish Life” program was initiated, urging member states to prosecute anti-Semitic hate speech and crimes.

He said that achievements are being made in the battle against anti-Semitism alongside alarming trends that were highlighted in other reports.

As he noted, “not being balanced projects negatively on where we are as a people.”