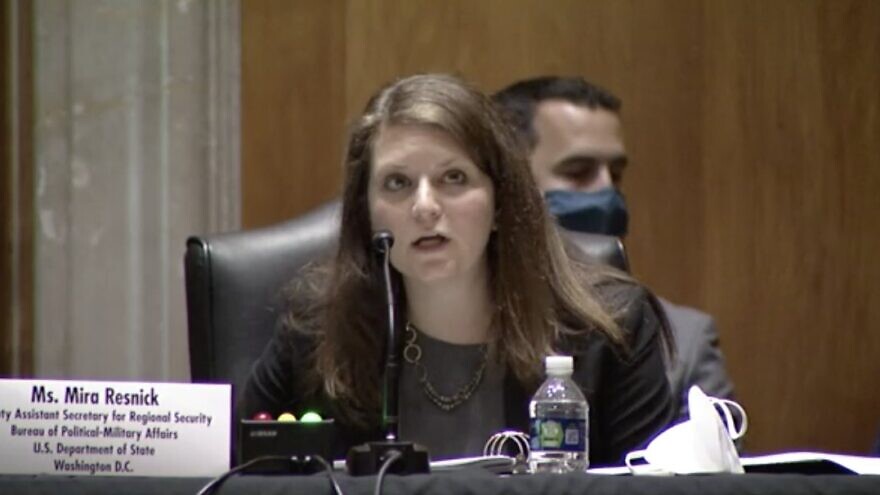 (September 14, 2022 / JNS) Mira Resnick is intensely focused on Ukraine. However, the Middle East is never far away when you are the U.S. State Department’s point person on arms transfers.

She is the deputy assistant secretary of state for regional security in the department’s Bureau of Political-Military Affairs, an agency that bridges with the U.S. Department of Defense.

She also is responsible for the Bureau’s Office of Security Assistance, with oversight and input on billions of dollars in annual security assistance, as well as providing State Department input for Department of Defense planning and military activities.

Speaking with JNS this week, Resnick said the United States is planning for a possible revived nuclear deal with Iran but is also preparing for various scenarios should the negotiations with Tehran fail. Either way, she stressed, America’s commitment to Israel’s security remains ironclad.

“That means that we will hold true to our commitment to Israel’s Qualitative Military Edge, which is, of course, our policy, our law, our moral obligation,” said Resnick. “We will continue to be able to work with our partners and our allies, including Israel, to plan for scenarios whether there is a mutual return to the JCPOA, or no mutual return to the JCPOA (the Joint Comprehensive Plan of Action),” more commonly known as the 2015 nuclear deal.

As part of that commitment, U.S. President Joe Biden this summer publicly introduced the concept of a regional air defense system for Israel and its Arab allies in an effort to thwart Iran’s ballistic-missile and drone programs. The idea was coolly received among Gulf allies when presented during Biden’s July trip to the region. Resnick said that some of the concerns expressed about such an alliance, including regarding the interoperability of systems and a gap in trust, can be alleviated.

“I would say that there are a few things that go into making sure that there is a regional architecture. One, of course, is interoperability. And that is why we work so hard to make sure that the United States is able to transfer U.S.-origin equipment to the region for the purpose of interoperability,” said Resnick. “But there was also an issue of the will [to do it]. And we need to work very closely with our partners and allies in the region to be able to create that political willingness to be able to work together.”

‘A lot of priorities on its plate’

The Biden administration came into office during a time of rapid change in the Middle East and placed a major focus on human rights at the expense of relationship-building with problematic allies such as Saudi Arabia. Biden used his trip to the region to try to reset those relationships with mixed results.

The arms sale to Saudi Arabia comes after years of rocky relations between Washington and Riyadh over the murder of Washington Post journalist Jamal Khashoggi, with then-presidential candidate Biden vowing to make the country a “pariah” on the international stage. In February of last year, Biden banned U.S. offensive weapons sales to the kingdom.

Regarding the UAE, the State Department cleared a potential $2.2 billion sale of 96 Lockheed Martin-made Terminal High Altitude Area Defense (THAAD) missiles along with related equipment, despite criticism of the Emiratis’ role in the Saudi-led conflict with the Houthis.

“We have to be able to run and chew gum at the same time. And we see human rights as a value that we want to elevate in our foreign policy,” said Resnick. “We also understand that our partners face real threats from the region from Iran-backed threats and elsewhere. And so, we will work with them to improve their security sector governance. We will work with them to improve civilian harm mitigation strategies, and at the same time, invest and double down on their defensive articles so that they can defend themselves, like we did with Saudi Arabia and with the UAE.”

Resnick told JNS that she doesn’t draw a link between the U.N.-brokered Yemen truce, which has held since April under multiple renewals, and the decrease in tensions between Washington and Riyadh.

A veteran of the Middle East, Resnick has served on the Democratic staff of the House Committee on Foreign Affairs, focusing on the Middle East and North Africa and building bipartisan consensus on issues such as weapons transfers, sanctions, human rights and foreign assistance. She also worked on strategic planning and relations with Congress in the State Department’s Bureau of Near Eastern Affairs.

The challenges of the Middle East of a decade ago, though, are much different than today, as Resnick acknowledges.

“The biggest challenge now has been making sure that the Middle East is able to work together, but also work independently from the rest of the world. The United States has a lot of priorities on its plate. My portfolio is global. I work on Ukraine, I work on Taiwan, and we want to make sure that the Middle East is able to respond in real-time to the threats,” said Resnick. “But it also presents an enormous opportunity. There is incredible dynamism in the region. And being able to link partners together to be able to respond to those threats is a huge opportunity and a huge privilege.”

Regarding American response to those threats, Resnick noted a startling fact: “Operation Nickel Grass,” the 32-day strategic airlift the United States conducted to deliver weapons and supplies to Israel during the 1973 Yom Kippur War, cost $2.2 billion. That’s the equivalent in today’s dollars to the $14.6 billion cost of Ukraine aid to date.

“There is poetry in math. But also in the underlying assumptions about what that kind of assistance means because the stakes are high right now,” said Resnick. “We have the rules-based international order at stake. When our partners feel threatened, that is when the United States shows up.”