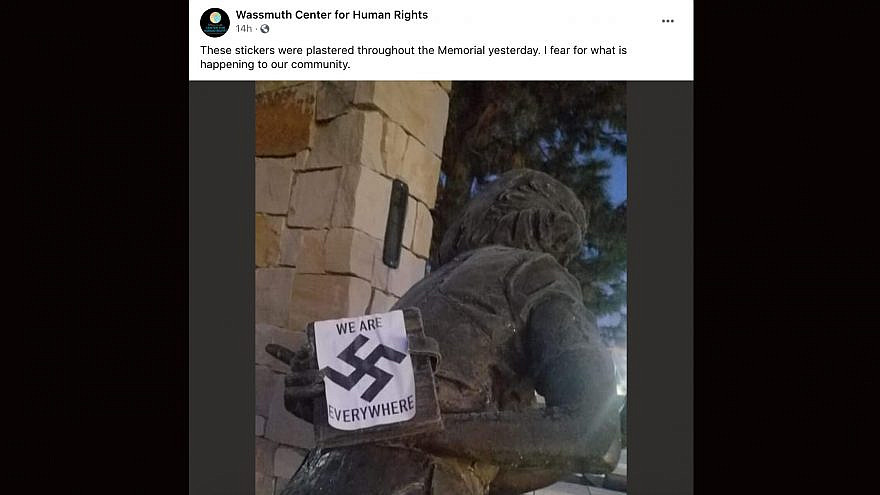 The local organization that erected the Anne Frank memorial in Boise, Idaho, posted a picture showing that it had been vandalized. Credit: The Wassmuth Center for Human Rights/Facebook.
Spread the word.
Help JNS grow!
Share now:

(December 10, 2020 / JNS) A statue of Anne Frank in the Idaho capital of Boise was vandalized this week with swastika stickers and the message, “We are everywhere.”

The incident happened sometime between Monday evening and early Tuesday morning, according to the Boise Police Department, which is reviewing security footage to find those responsible for the vandalism.

One of the stickers was placed over the diary held by the sculpture of Frank, who died in the Holocaust at the age of 15 and whose writings of her experiences in hiding became iconic worldwide. In many schools, it is also read as part of Holocaust-education programs.

The Wassmuth Center for Human Rights, the local group that erected the memorial in 2002, posted on Facebook: “I fear for what is happening to our community.”

By Wednesday evening, flowers had been placed at the statue’s feet, according to a post by the Wassmuth Center for Human Rights.

The statue memorial, which until recently was the only one of Anne Frank in the United States, was vandalized at least two previous times, having been toppled in 2007, and vandalized with anti-Semitic and racial slurs a decade later.

In a statement, Boise Mayor Lauren McLean said, “This is shocking and disturbing, and we know it does not reflect the values of our community.”