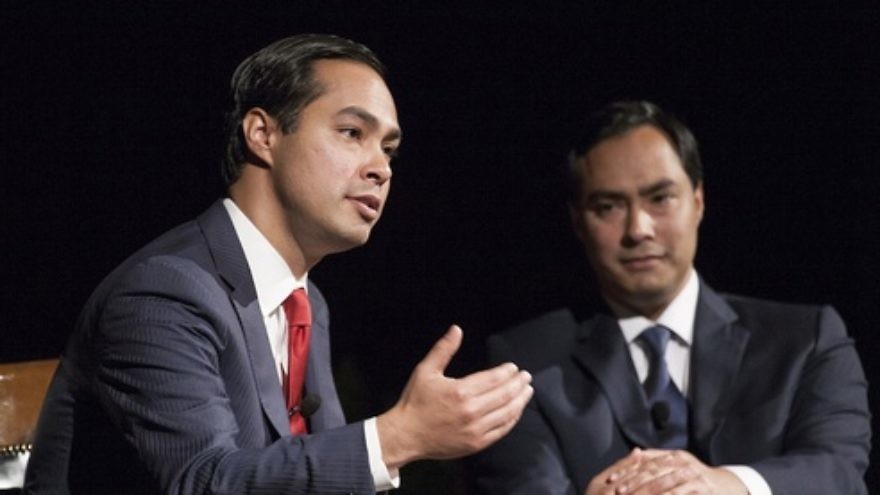 (June 12, 2014 / JNS) As the Democratic and Republican parties battle for who will control the growing Latino-American vote, one young Hispanic politician is being eyed by Democrats as their party’s future.

San Antonio Mayor Julian Castro was thrust into the national spotlight last month when President Barack Obama nominated the 39-year-old Democrat to be the next secretary of the U.S. Department of Housing and Urban Development (HUD).

In his third term as mayor, Castro has charmed many in the San Antonio Jewish community, who are grateful for his close relationship with and admiration of their community—sometimes more than they would expect from a non-Jewish politician.

Before becoming mayor in 2009, Castro served on the city council and at the age of 26 was the youngest councilman in the city’s history when elected. He first gained national attention when he was invited to be the keynote speaker at the 2012 Democratic National Convention in Charlotte, N.C.

Yet, according to those who know him, national fame has not affected his personal relationships with friends and associates.

Rabbi Chaim Block, director of Chabad of San Antonio, has known Castro since the mayor was a city councilman and remembers being impressed when Castro came to speak to about 800 guests at the Chabad’s Hanukkah on the River celebration.

“I remember back then how impressed I was with what he said and how knowledgeable he seemed to be about the holiday and was able to really connect with the audience,” said Block.

According to Block, Castro was an integral member of a group of Latinos and Jews organized by the San Antonio Bar Association who met monthly to discuss issues of interest to both groups.

“He was one of those people who was on the forefront of interfacing with the Jewish community,” said Block.

On the Jewish side of the dialogue was Robbie Greenblum, San Antonio’s city attorney and one of Block’s congregants. When Castro ran for mayor, he asked Greenblum to be his chief of staff. Greenblum’s close connection to the Jewish community was instrumental in fostering Castro’s awareness of Judaism, Jewish holidays, and Jewish issues, and as mayor, he began attending more Jewish events throughout the year, said Block.

Castro is “a person of the highest integrity, the highest moral character; this is a person of unimpeachable integrity,” said Rabbi Barry Block (no relation to Rabbi Chaim Block), who for 21 years led San Antonio’s Reform-affiliated Temple Beth-El. “I know him on a personal level and he’s an extremely humble person.”

There are about 10,000 Jews in San Antonio, a city with a total population of more than 1 million. Despite some of the city’s Jewish residents disagreeing with some of the mayor’s liberal politics, he nonetheless remains popular.

In his five years as mayor, Castro has spearheaded various projects to revitalize the city center, placing specific emphasis on sustainability.

“My personal development agenda is very much aligned with the mayor’s agenda and public policy,” said commercial real estate developer and Jewish community member David Adelman. “I’m excited he’s going to HUD because I think he truly will be able to get his head wrapped around some of the issues facing our country as it relates to housing issues.”

Inspired by the book “Start-up Nation: The Story of Israel’s Economic Miracle,” Castro led a San Antonio delegation, including Adelman and both Block rabbis, on an economic visit to Israel in 2011.

One area of interest for the delegation was water, and they were impressed by the technological advances in water desalination and conservation.

“San Antonio is a place where water is precious and becoming more and more precious as the population grows,” said Adelman. “Texas, as you know, is growing in population but they’re not creating any more water sources, so we have to learn to use our water supply more judiciously than we ever had to in the past and Israel is on the forefront. The water consumption per capita in Israel is incredibly low.”

What most impressed Barry Block about the mission was when Castro met Israeli President Shimon Peres at his residence.

“It really was extraordinary. I mean when you’re talking about a president who at that time was near 90 [-years-old] and the mayor in his 30s, and I think that we can see that President Peres saw a little bit of his younger self in Mayor Castro,” he said.

Chaim Block values the personal relationship that he has developed with the mayor over the years, including when Castro and his wife joined his family for Shabbat dinner, which gave him a chance to converse with the mayor about Jewish values in relation to leadership.

“We talked about how the criteria for leadership in Judaism is humility,” he said. “It is the acknowledgement of a higher power and of the limited nature of your own abilities; and how the valuing of each and every individual, not the masses, but to pay attention to detail, which was Moses’ paradigm for leadership.”

Neither Castro nor his staffers were authorized to comment in this article, saying that the White House requested that the mayor not do any interviews until after he is confirmed by the U.S. Senate. So far, no date has been set for a confirmation vote, but will likely be in the Senate Housing and Urban Affairs committee later this month.