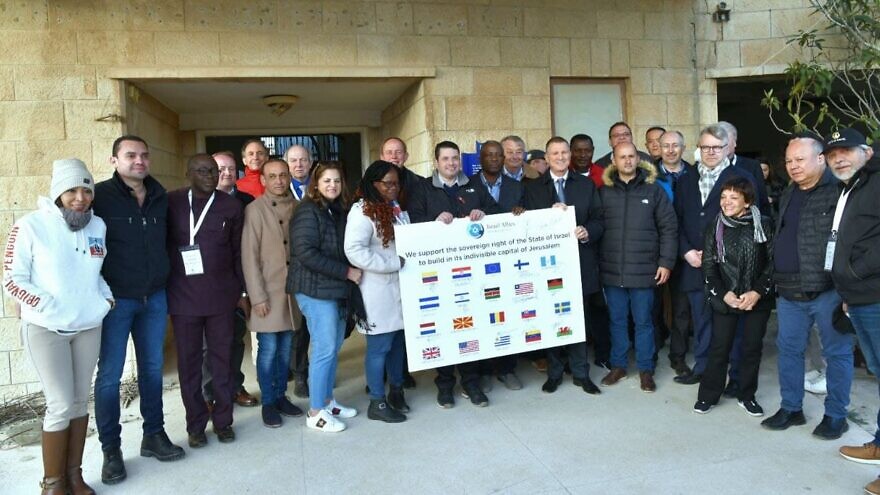 (March 22, 2022 / JNS) Two dozen Christian parliamentarians wrapped up a visit to Israel on Tuesday with discussions on how to embrace and defend Israel in modern times. The discussions were the culmination of a three-day journey that took them to the Western Wall, key holy sites in Judea and Samaria and face-to-face meetings with the country’s top political leaders.

The MPs were in Israel through the Israel Allies Foundation (IAF), the umbrella organization of more than 50 pro-Israel parliamentary caucuses from around the world. Lawmakers came from as far as Malawi, Guatemala and the United States to show their support for Israel and talk about issues surrounding the Jewish state that might need addressing in their governments back home.

On Sunday, the MPs signed a declaration in Atarot supporting the “sovereign right of the State of Israel to build in its indivisible capital of Jerusalem,” which they presented to Knesset Christian Allies Caucus co-chair Knesset member Yuli Edelstein of the Likud Party.

Standing with an undivided Jerusalem is one of the key issues for members of the caucuses, said Reinstein.

‘Jerusalem is a biblical issue’

“Much of the world is pressuring Israel to sacrifice her territorial integrity for the prospect of a false peace,” said Knesset member Gila Gamliel (Likud) at an IAF celebratory dinner on Monday. “To add insult to injury, they are campaigning to split the Holy City—Jerusalem—in two. As believers in the Bible, the issue of Jerusalem should resonate in your hearts,” she said.

“God instructs us to ‘Pray for the Peace of Jerusalem.’ The question of Jerusalem is not a political matter. It is a biblical issue. Allowing … Jerusalem to be divided would lead to the end of freedom of religion in a city of worship for billions of people around the world,” she continued.

Gamliel helped start the Knesset Christian Allies Caucus in 2004. Since then, the international network of caucuses has grown to represent some 1,200 legislators.

“I have seen firsthand how important it is to strengthen the lines of communication between the Christian international community and the Knesset,” said Gamliel. “You are all people of faith and, as such, you have a deep connection to the Land of Israel and especially the biblical heartland of Judea and Samaria. You understand that Israel is the living proof of fulfilled biblical promises.”

‘Iran is a threat to Israel and the West’

Attendees also held discussions about the Ukraine crisis and the Iranian nuclear threat, as well as the battle against anti-Semitism.

At Atarot, Edelstein called on the group to lobby their governments against the impending Iran nuclear deal.

“We cannot afford the situation when the regime in Tehran will have weapons of mass destruction including nuclear weapons,” said Edelstein. “This is a message that I would love very much for you to take to your countries.”

Gamliel, similarly, told attendees that “now, more than ever, our long-standing relationship with our friends around the world, especially those active in political work, has become even more important. Iran’s pursuit of nuclear arms is a frightening example of the radical Islamic agenda… A nuclear Iran is not only a threat to Israel’s very existence, but a threat to the Western world at large.”

In a ceremony held at the Israeli Foreign Ministry on Monday afternoon, the Christian leaders signed a resolution to push for the adoption of the International Holocaust Remembrance Alliance (IHRA) working definition of anti-Semitism in their countries and around the world. The resolution was presented to Israeli Foreign Minister Yair Lapid in a closed-door talk.

“We urge parliaments worldwide to adopt the IHRA working definition of anti-Semitism and its 11 examples of specific prejudiced behaviors targeting the Jewish people and the State of Israel, and call on lawmakers to vigorously apply the definition and its examples in the performance of their legislative, oversight and advocacy duties,” the resolution said.

This was the first IAF mission since the start of the coronavirus pandemic, which kept Israel’s skies closed for the better part of the last two years.