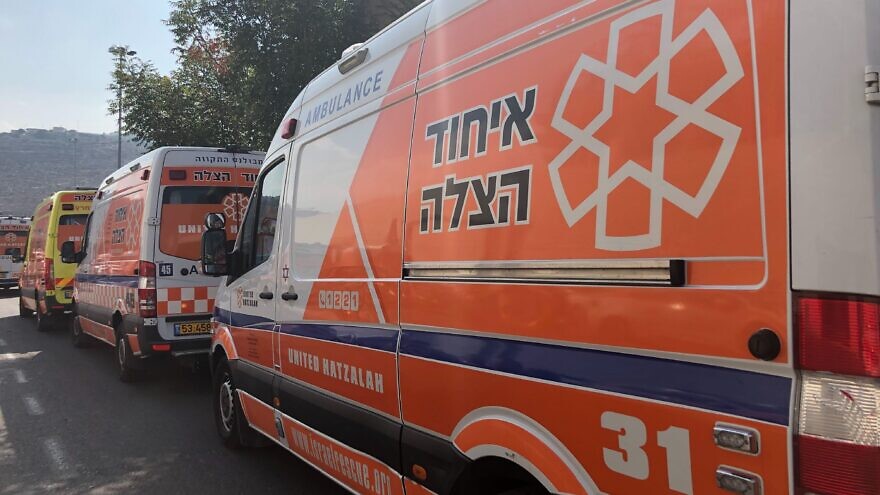 (June 1, 2022 / JNS) After one of the most difficult years in United Hatzalah’s history, it was time to celebrate and secure the future.

Over 1,000 people gathered in New York City on the night of May 24 to support the ground-breaking, life-saving 6,200-volunteer emergency medical service. The Friends of United Hatzalah of Israel’s third annual gala came a year after COVID-19 nearly took the life of Hatzalah’s founder, and in the wake of crisis after crisis that tested the organization’s mettle and stretched its resources.

“We dealt with a few waves of COVID in Israel, some of which were very difficult. We had lockdowns. Then we had the Mount Meron tragedy, which is the worst in my lifetime that I remember, and we were all involved there performing CPR and helping over 300 people. Then we had the war in Gaza a year ago. Then we had the Surfside [Fla.] disaster. This last year was so busy and challenging for us, and now we’re operating on two fronts. We have 6,000 volunteers in Israel, and we have 200 volunteers involved in Ukraine,” United Hatzalah Founder and Director Eli Beer told JNS.

Beer himself fell gravely ill with COVID and said he didn’t believe he would survive his second coma. He spent a month in a hospital in Miami. However, Beer said he feared more for the organization’s future than his own.

“I was worried about United Hatzalah more than anything because I’m still the founder. It’s not like the next generation has taken over. I was worried that if something happened to me, that something could happen to United Hatzalah. In [what I thought might be] my last words, I said to continue volunteering, continue leading the organization, continue supporting it. I was worried if I die, people will stop supporting the organization because people know me, they met me, and I was surprised when I woke up a month after being in a coma on a ventilator, that the organization was doing better than before,” said Beer, who credited United Hatzalah’s board and chairman. Beer said the experience taught him it was time to put a succession plan in place.

After his health scare, Beer was accompanied on his return to Israel by Miami-based physician Dr. Zev Neuwirth, who was honored by Hatzalah on Tuesday for his volunteer medical work in Ukraine, from where he recently returned after a five-week mission.

“The full impact probably hasn’t hit me yet. Initially, it was a call of duty, a call to action. It was my overwhelming desire and my initial calling in medicine to ease the pain and suffering of those who weren’t able to help themselves, but having gone through the experience of watching what’s going on (in Ukraine), there are no words. It’s an overwhelming amount of emotion, of wanting to do, wanting to help, satisfaction with being able to provide medical care and intervention, saving lives, the realization of going above and beyond, maybe sometimes even more so when being shot at or under missile fire, and probably just mostly overall an appreciation of the value of what you have: life and being able to put other’s needs above yours,” Neuwirth told JNS.

The founder of the Hatzalah branch in Montreal, Neuwirth started medical school at the age of 40 following the brain cancer-driven death of his wife. He graduated with honors, went on to a commission as a United States Naval Officer, and underwent training to deliver medical care in war-torn countries.

“Sometimes you don’t have time to think or feel. It’s just the mission at hand, and then when you come back, you’re with your family and your kids and your wife and it’s just a value and an appreciation of being happy and being grateful for what you have and always being able to give,” said Neuwirth, who plans on returning soon to Ukraine, along with his two sons, who assist with logistics and operations.

Neuwirth oversaw the purchase and staffing of two new ambulances, which are on their way to Ukraine from Spain. Neuwirth previously brought what he believes to be the sole volunteer foreign ambulance in Ukraine that is operating in a medical capacity, rather than as a transportation vehicle.

It is the actions of people like Neuwirth that drove donors to deliver $6 million in pledges at Tuesday’s gala.

“I really believe that United Hatzalah is a little slice of utopia because it represents the Jewish soul, the Jewish values. I believe the United Hatzalah could not have been created anywhere else but Israel. And I believe it’s an honor and a privilege to save lives,” Amy Korenvaes, a Dallas-area philanthropist and national board member of the Jewish Federation’s Secure Community Network, told JNS.

Jonathan Abrams, an active Hatzalah volunteer in the Tel Aviv area, is a jeweler by trade. He told JNS it is imperative to contribute what one can to Hatzalah, whether in the form of money, time or skill.

“Someone told me once that if Mozart wouldn’t have played music, he would have been judged by his creator for not using the gift that he had. So, for some reason, I can function and deal with the blood and the screaming, and if this is something that I’m good at, I have to do it. I’ve seen the difference I can make in the quality of people’s recovery or the difference between them having a police officer knock on their family’s door and tell them the [ultimate] bad news, or that their family member is in the hospital and will make a full recovery,” he said.

Famed attorney Alan Dershowitz addressed the gathering on Tuesday, placing Hatzalah a close second behind the Israel Defense Forces in regard to using God-given Jewish intelligence to develop ways to save lives.

“It is one of the most important representatives of the Jewish state in a hostile world. Nobody can disagree with Hatzalah. You can disagree with anything else involving Israel, but Hatzalah unites Jews, Arabs and Christians, haredim and secular. It has one goal: pikuach nefesh (‘saving a life’). That’s all. It’s a goal that unites the entire Jewish community,” said Dershowitz.

United Hatzalah’s service is available to all people regardless of race, religion or national origin, utilizing unique GPS technology to deliver an average response time of less than three minutes across Israel and 90 seconds in metropolitan areas.

The event was chaired by supporter Alex Blavatnik, who was honored, along with Cathy and Allan Weiss, and Chantal and Al Gindi, for their continued support of Israel and Hatzalah.