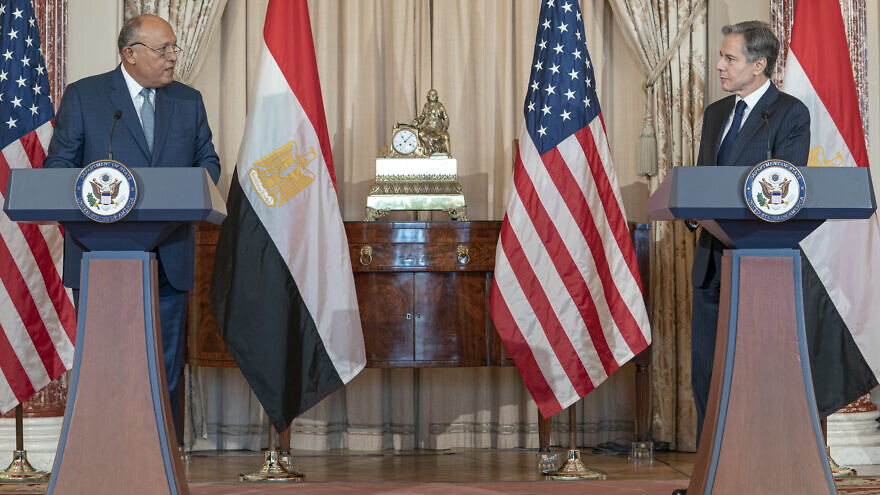 (February 28, 2022 / JNS) The decision by the Biden administration announced at the end of January to withhold $130 million in U.S. military aid to Egypt over human-rights concerns has undoubtedly harmed relations between Cairo and Washington, Israeli observers have said.

The withheld funds represent 10 percent of the $1.3 billion that the United States has earmarked for Egypt annually since 2017.

“Practically, the weapons that the Egyptians wanted to buy are not arriving for now. Secondly, at the symbolic level, there is a statement here about human rights falling short of the American standard, and that Egypt didn’t’ do enough on this front,” he noted. “There is no question that this harmed relations.”

Egypt does not view Israel as a lobby through which to reach Washington, said Shay, contrary to some reports. “The Egyptians have their own tools for dealing with the U.S. administration,” he argued. Israel has independent ties with Egypt, which Shay described as being at their best level since the 1979 peace accords were signed between Israel and Egypt.

One way that Egypt has been responding to America’s pressure is by not putting all of its eggs in one basket and diversifying its defense purchases, making significant procurements from France, such as 30 Dassault fighter jets, and Russia, which has sold Cairo 24 Sukhoi SU-35 fighter jets.

Michael Barak, a senior researcher at the International Institute for Counter-Terrorism, where he serves as the head of the Global Jihad and Palestinian Terrorism Desks, told JNS that when President Biden was elected into office in 2020, the Egyptian government experienced deep anxiety over the prospect of being hit with American sanctions over human rights.

In November, a meeting was held by the U.S.-Egypt Strategic Dialogue forum, which saw the two countries discuss ways on building economic and defense cooperation, said Barak. The meeting acted as a “springboard to improve relations,” he said.

“Finally, Biden understood Egypt’s strategic value, especially in light of geopolitical changes, such as the Chinese and Russian ascendency in the area,” he said. “In the Red Sea, the Chinese are strengthening their position, and the U.S. is trying to block this infiltration, as well as Iran’s spread. Egypt is a key state in this context.”

As a result, Biden came under criticism from the progressive wing of his own Democratic Party, accusing him of immorally providing military assistance to Egypt and enabling a visit in November by the Egyptian foreign minister, he noted.

“Because of this criticism, Egypt is now trying to show that it is sensitive to human rights,” said Barak. “The Egyptians understand that Biden can’t give up on them, but they are disturbed by the reduction in aid. Biden, for his part, is trying to appease the critics from the Democratic party, while at the same time trying to safeguard the alliance,” said Barak.

Meanwhile, within Egypt, critical voices over the American stance have not failed to materialize, including in the Al Ahram Egyptian daily, which stated that Biden failed to learn lessons from Obama’s mistakes in the region (namely, supporting the Muslim Brotherhood in Egypt over former president Hosni Mubarak.”

“Egypt has told the U.S. that it does take human rights seriously, but that it can’t do a drastic 180-degree turn in a single second, because it is still licking its wounds from the 2012 revolution [which enabled Muslim Brotherhood candidate Mohamad Morsi to win the elections],” said Barak.

“The Egyptians note that the economic, social and state institutions are in a process of recovery, but that in 2021, el-Sisi declared that human rights are important for him to promote. Still, this won’t happen at the rate that the West expects, but rather at the Egyptian pace,” said Barak.

Reforms could include changes to the criminal justice system, the death penalty, human rights of civilians and canceling emergency laws, which Sisi did in October.

Barak echoed Shay’s position that Egypt does not require Israeli intervention on its behalf in Washington.

“Israeli-Egyptian relations improved because of shared interests in keeping Sinai free of ISIS, and common threats posed by the Houthis in the Red Sea, as well as Iranian activities, and Libya,” he said.