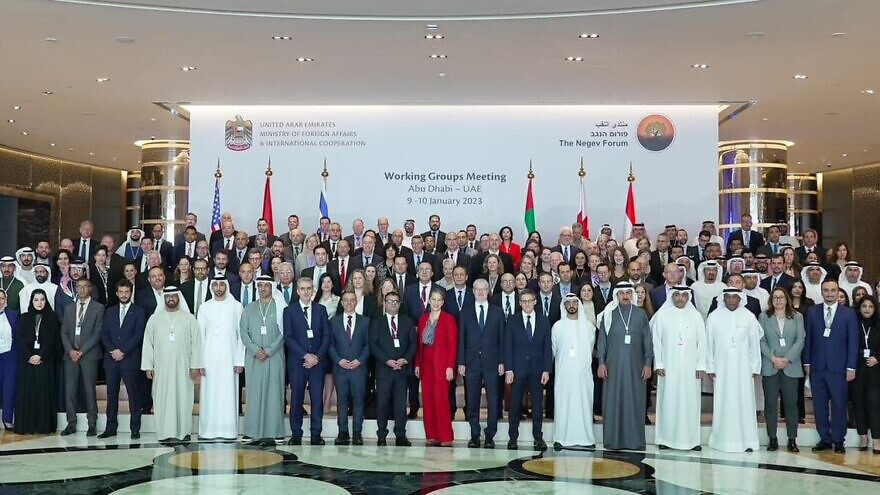 State Department Counselor Derek Chollet told reporters on Tuesday that Washington was attempting to develop programs and initiatives to “help us augment security, peace and economic prosperity in the region” in interagency meetings with officials from Israel, the United Arab Emirates, Egypt, Bahrain and Morocco.

The Negev Forum is preparing for its second multilateral summit, scheduled for the spring in Morocco. The inaugural Negev Summit took place last March in Israel with participating countries’ foreign ministers, followed by steering committee meetings in Bahrain in June and on Zoom in October.

The Biden administration sent around 40 officials and diplomats to Abu Dhabi, including senior officials from the State Department, USAID, the Department of Defense, the Centers for Disease Control and Prevention and other government agencies. The forum’s six working groups focus on food security and water technology; clean energy; tourism; health; education and coexistence; and regional security.

The meetings came during a tense period in Israel-Palestinian relations. Despite Israel’s peace treaty with Jordan, Amman has refused to participate in the Negev Forum absent the Palestinians, who steadfastly refuse to join the discussions amid a frayed relationship with the Biden administration.

Reached out to the Palestinians

Washington and Cairo reached out several times to the Palestinians to secure their participation in the working groups but were rebuffed, American and Israeli officials have said.

“We believe that the Negev Forum should be an open forum. We are keen to have others become involved in it and throughout this process since the ministerial meeting last March, we have been in near constant contact with countries we believe may be interested and would benefit from involvement in the Negev Forum,” Chollet told JNS in response to a question on the absence of the Jordanians and Palestinians.

He added that what has been achieved in the first working group meetings is proof “that countries that are not yet part of the Negev Forum will be incentivized to join” and in the coming days, the State Department will “ensure that we are briefing those who didn’t hear about what was achieved in the hopes that they may join in the future.”

State Department officials, though, were short on details, saying that more would be released in the coming days, including a framework document. On the regional security front, Chollet said there is “real room to create venues in which the Negev Forum countries can come together to talk about threat perception, about ways we can cooperate on things like border security, perhaps issues related to security and climate change, disaster preparedness.”

He said the regional security working group specifically and broadly discussed “capacity building related to information sharing, in an effort to augment the already very important work that is happening between our militaries,” and developed ideas on other subjects that will require further study.

The U.S. is looking forward to hosting Negev Forum members in the coming months “to see some of the capabilities we have when it comes to information sharing, when it comes to addressing security risks and threats,” he said.

Chollet said the Negev Forum members have committed to an annual ministerial meeting, along with periodic working group meetings and a rotating presidency of the steering committee.

Although the next Negev Forum summit is set for the spring in Morocco, no firm date has been announced.