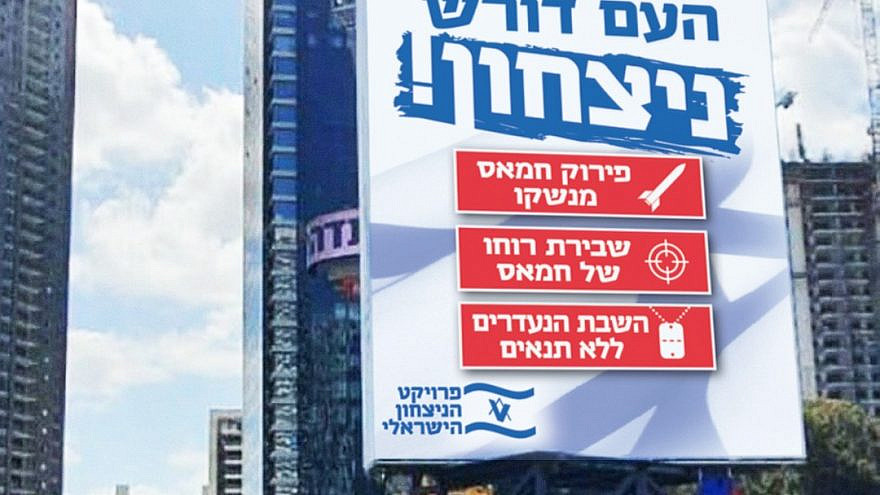 (May 25, 2021, JNS Wire) A public campaign launched by the Israel Victory Project on Monday saw huge billboards adorn the Ayalon highway in Tel Aviv and elsewhere with the message “The People Demand Victory.” The campaign was launched in reaction to the widespread disappointment with how the 11-day conflict with Hamas ended. The Israel Victory Project seeks to resolve the Israeli-Palestinian conflict by convincing Israel’s enemies that they should end their war of violent rejectionism against the Jewish State through a variety of means.

The billboards lay out three popular demands that the Israeli government should be pushing to be victorious over Hamas: “The disarmament of Hamas, breaking the will of Hamas to continue its war and the return of Israeli soldiers and civilians held by Hamas, without conditions.”

“There was a lot of enthusiasm from the public to endure the incessant rocket attacks in order to support an Israel victory”, Nave Dromi, Director of the Israel Victory Project, said. “We have never heard the terminology of victory used as much as we did during this operation, from the IDF Chief of Staff to the people of the south, who deserve permanent peace and security. Now terminology has to be turned into action. It is clear that the people support this.”

Initiated five years ago, the Israel Victory Project, an initiative of the Middle East Forum, has garnered large support for its goals in pushing for the end to the conflict through an Israel victory amongst decision-makers and opinion-shapers in Israel and the U.S., including caucuses in both nation’s parliaments.

“There is no doubt that the IDF achieved significant results during Operation Guarding the Walls, but at the same time there is a feeling within the Israeli public of stopping too short and the next round is just around the corner, ” said Gregg Roman, Director of the Middle East Forum. “We must act to change Israeli policy, and instead of working towards a short-term ceasefire, there must be decisive action until the desired results are achieved.”

“We call on the Israeli government to understand that on the other side does not sit a party which seeks peace and quiet but calls daily for our destruction and tries actively to realize this dream. Only the disarmament of Hamas and breaking its will to continue fighting in a clear and decisive manner will bring true peace and quiet for all.”

The Israel Victory Project
The Israel Victory Project seeks to resolve the Israel-Arab conflict by convincing Palestinians that the Jewish state is tough, determined, and enduring, so that they give up their century-long war against it.
Publish your organization's press release on JNS Wire
Releases published on the JNS Wire are communicated and paid for by third parties. Jewish News Syndicate, and any of its distribution partners, take zero responsibility for the accuracy of any content published in any press release. All the statements, opinions, figures in text or multimedia including photos or videos included in each release are presented solely by the sponsoring organization, and in no way reflect the views or recommendation of Jewish News Syndicate or any of its partners. If you believe any of the content in a release published on JNS Wire is offensive or abusive, please report a release.