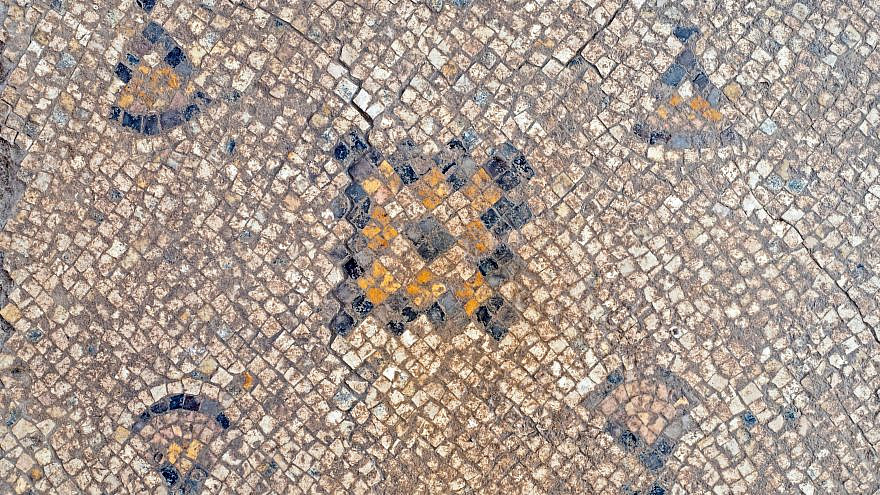 (April 26, 2021 / JNS) A 1,600-year-old mosaic pavement that was uncovered recently in Yavne in central Israel will be placed on display at the city’s cultural center, the Israel Antiquities Authority (IAA) announced on Monday.

The project is a joint initiative of the IAA, the Yavne Municipality and the Israel Land Authority.

The flooring, which dates back to the Byzantine period (fourth to fifth-century C.E.), was unearthed during large-scale excavations launched ahead of the development of a new neighborhood in the ancient city.

IAA archaeologists Elie Haddad and Hagit Torgë said that though they initially believed the flooring to be “simple white mosaic paving belonging to yet another industrial installation,” once they treated it with a special acid to remove its patina coat, “a colorful mosaic carpet was revealed, ornamented with geometric motifs.”

They assessed that the well-preserved flooring “may have been part of a splendid residential building in a wealthy neighborhood adjacent to the industrial zone.”

Once documented, drawn and photographed in the field, the pavement was temporarily transferred to the IAA’s mosaic workshop at the Rockefeller Museum in eastern Jerusalem for preservation by conservation experts.

The Yavne Municipality is currently preparing the infrastructure for the display of the mosaic, whose relocation and preservation will be carried out through what the IAA calls “ancient technological methods … employing materials used in antiquity.”

During the work, the site will be open to the public so that everyone can observe the conservation process and gradual uncovering of the mosaic.

“Archaeological preservation and awareness of the past are important values in the life of the city, which has a magnificent history,” said Yavne Mayor Zvi Gov-Ari.

“In an age of progress and accelerated development in all fields of life, future generations should also be able to see how the city has evolved throughout history,” he added. “We will continue to work with the Israel Antiquities Authority to ensure public access to the finds, and continued research and understanding of the city’s past and its historical importance.”