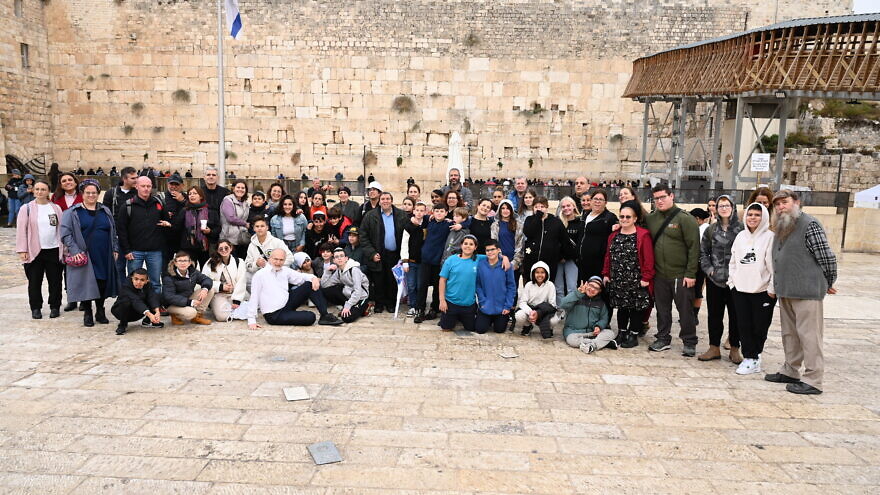 Thirty deaf and hearing-impaired students from across Israel celebrate their bar and bat mitzvahs in Jerusalem as part of a program developed by Young Israel in Israel’s Judaic Heritage Program for the Deaf and Hearing Impaired, the Jewish Agency for Israel and World Mizrachi. Credit: Nachshon Philipson.
Spread the word.
Help JNS grow!
Share now:

(December 7, 2022 / JNS) Thirty deaf and hearing-impaired students from across Israel celebrated their bar and bat mitzvahs in Jerusalem this week as part of a program developed by Young Israel in Israel’s Judaic Heritage Program for the Deaf and Hearing Impaired, the Jewish Agency for Israel and World Mizrachi.

The program, which included a sign-language interpreter, began at the Beit Knesset Nitzanim in Jerusalem’s Baka neighborhood, with the boys donning their tefillin and being presented with a tallit and siddur. The girls received candle sticks designed by famed Israeli artist Emanuel and a book of tehillim (psalms).

Following a celebratory meal, the group of 21 boys and nine girls headed to the Old City for a guided tour and an additional ceremony at the Western Wall.

The youths, who study in special schools that address their hearing challenges, traveled to Jerusalem from across Israel.

Rivka Morowitz, a mother of eight children, including three with special needs, accompanied her son Meir, who is deaf and has Down Syndrome.

“This event allowed Meir to know that something special was being done just for him, and he now knows that he is being introduced to the world of Jewish adulthood in a meaningful way that he and our family will always remember,” said Morovitz.

“There are few more rewarding things than witnessing a child who, despite his or her limitations, realizes that they are being counted and can celebrate in a way that respects their specific needs and interests,” said Daniel Meyer, executive director of Young Israel in Israel. “Many of these parents were told that their child would never talk or be able to learn. It’s truly heartwarming to see how far these children have come, the mountains they have had to climb to get to this point. This is a moment that every one of these children is sure to cherish for the rest of their lives,” he added.

Rabbi Doron Perez, chair of World Mizrachi, said: “The beauty of Jewish life is that it is immersive and engages all people, including those with particular disabilities. We as a community are committed to ensuring that these young men and women will be able to experience the special transitional moments of the bar and bat mitzvah in a way which takes into account their unique needs.”