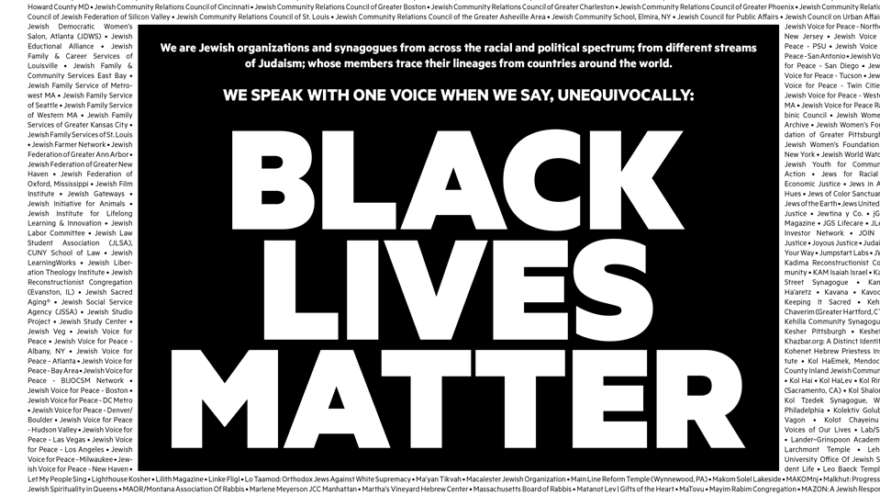 “We are Jewish organizations and synagogues from across the racial and political spectrum; from different streams of Judaism; whose members trace their lineage from countries around the world,” state the groups in the Friday ad.

“We speak with one voice when we say, unequivocally: Black Lives Matter.”

The groups also state, “We support the black-led movement in this country that is calling for accountability and transparency from the government and law enforcement. We know that freedom and safety for any of us depends on the freedom and safety of all of us.”

“There are politicians and political movements in this country who build power by deliberately manufacturing fear to divide us against each other. All too often, anti-Semitism is at the center of these manufactured divisions.”

The groups make a connection between anti-black and anti-Jewish hatred.

“As Jews, we know how dangerous this is: when politicians target Jewish people and blame us for problems, it leads directly to violence against us,” they state. “When black movements are undermined, it leads to more violence against black people, including black Jews.”

“Anti-Semitism is part of the same machinery those politicians use to blame black and brown people, people who are immigrants, people who are Muslim and more,” they continue. “But whether they generate division and fear based on our religion, our skin color, or how long we’ve been here, their goal is to keep us from working together to win the things we all need to survive and thrive.”

The Black Lives Matter movement has gained momentum with the continued shootings of African-Americans by police officers.