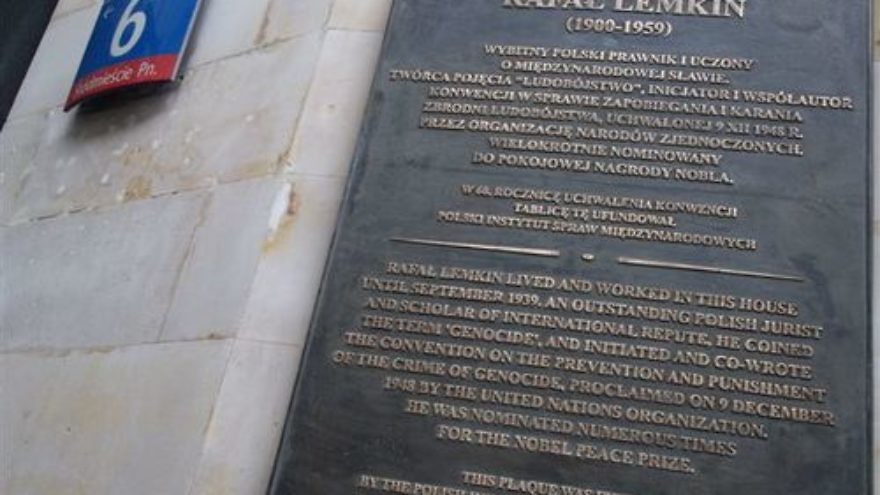 It seems as if every time Israel defends itself, somebody points an accusing finger and yells “Genocide!” Raphael Lemkin, who coined that term 70 years ago this autumn, would have been appalled by such abuse of his life’s work.

During the 1930s, Lemkin, a Polish Jewish attorney and expert on the development of languages, trudged from law conference to law conference across Europe, making the case for legal mechanisms to define and combat mass murder.

Lemkin was galvanized by the failure of the international community to prosecute Turkish officials involved in the genocide of approximately one million Armenians between 1914 and 1918.

No doubt Lemkin would have been disappointed by President Barack Obama’s decision to refrain from recognizing the Armenian genocide. The Obama administration has even refused to permit the public display of an elaborate rug sent by Armenian orphans to the White House in 1925 as a gesture of appreciation for U.S. relief assistance. Apparently, the administration fears Turkey would be offended if the rug is exhibited, since its display will remind the world of the Armenian genocide.

Lemkin realized that a new word was needed for the unique crime of attempting to destroy an entire racial, ethnic, or religious group. He took his inspiration from George Eastman, who invented the word “Kodak” because he needed a short, unique, and easy-to-pronounce name for his camera.

Lemkin coined the term “genocide” even as a new mass murder, the Holocaust, was unfolding before his eyes. Seventy years ago this autumn, Lemkin used the word “genocide” for the first time, in his book “Axis Rule in Occupied Europe.” The 700-page tome chronicled, in painstaking detail, all the laws and regulations imposed by the Nazis and their collaborators to facilitate the annihilation of the Jews.

In December 1948, Lemkin’s campaign was crowned with success when the United Nations adopted the Genocide Convention. It defined genocide as “acts committed with intent to destroy, in whole or in part, a national, ethnical [sic], racial or religious group, as such.”

Obviously, no reasonable person can believe Israel’s actions in Gaza fit that definition. Then again, the world is filled with unreasonable people. But the likes of Erdogan, Abbas, and the ANC are not the only ones who have done Lemkin’s legacy a disservice.

There are government officials who have refused to apply the label for political reasons. Susan Rice, who today is the president’s national security adviser, was director of African Affairs for the National Security Council in 1994, when the genocide in Rwanda began. In one policy discussion, she argued against calling it “genocide,” because, as she put it, “If we use the word ‘genocide’ and are seen as doing nothing, what will be the effect on the November [congressional] elections?”

And at the other extreme, there are those who casually apply the label where it doesn’t belong.  Prof. Richard Breitman recently claimed that “American presidents” have “abetted genocidal violence by the government of Sri Lanka.” Genocide Watch, however, reports that while both sides in the Sri Lankan civil war “have committed atrocities,” they fell short of genocide. Other human rights groups have reached the same conclusion.

For the term “genocide” to have any meaning, it must be used strictly in situations that indisputably warrant such a determination, according to the legal definition. Applying it or withholding it based on political considerations will render the term useless.