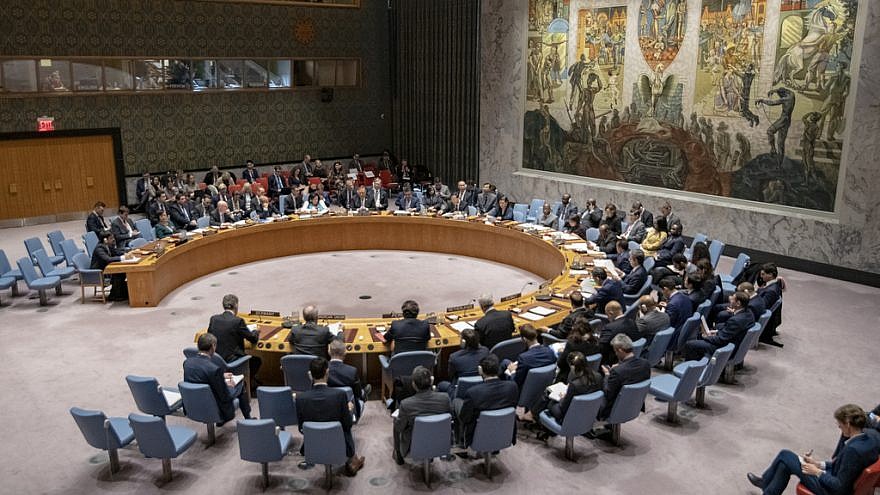 (January 14, 2020 / JNS) The United Kingdom, Germany and France on Tuesday took the first step towards reimposing U.N. sanctions on Iran, accusing it of violating the 2015 nuclear deal.

The European nations, which are part of the 2015 agreement, triggered a mechanism that’s part of the accord—formally known as the Joint Comprehensive Plan of Action, or JCPOA—that could enable snapping back U.N. Security Council sanctions on Iran within a few months, although the Europeans could stall the process.

The United States is the only country to withdraw from the nuclear deal, doing so in May 2018, reimposing U.S. sanctions lifted under the agreement, along with enacting new financial penalties on Iran as part of Washington’s “maximum pressure” campaign against Tehran. The move has resulted in increased tensions between the two countries, which most recently was seen in the U.S. killing of Maj. Gen. Qassem Soleimani, commander of Iran’s Islamic Revolutionary Guard Corps.

Iran responded by launching missiles at Iraqi bases housing U.S. troops, with Iran incidentally shooting down a Ukrainian airliner over the Iranian capital.

In remarks in state media, Iranian Foreign Ministry spokesman Abbas Mousavi cautioned that “if the Europeans continue the path of surrendering to the U.S. or want to abuse the dispute mechanism, they should prepare to accept the consequences and these consequences have been reminded to them before.”

Experts told JNS that Tuesday’s move is a significant shift by the Europeans as it pertains to their posture on Iran.

“The European move will reinforce the Trump administration’s conviction that it’s winning and add to Iran’s perception that it’s losing. The Europeans are desperately trying to find a way to save the deal, and to get the United States and Iran talking,” said Aaron David Miller, who advised on Mideast issues at the U.S. State Department for 25 years and is currently a senior fellow at the Carnegie Endowment for International Peace. “But that won’t happen until there’s a win-win opening. Right now, it’s win-lose.”

Foundation for Defense of Democracies CEO Mark Dubowitz said “the regime in Iran would always take the patient pathways to nuclear weapons, ICBMs and military potency afforded to it under the Iran nuclear deal as key restrictions disappeared starting in 2020. Better that we are addressing these issues while the regime is facing an economic and political crisis than when it was enriched, emboldened and more lethal from sanctions relief. It’s good to see the Europeans facing this reality, instead of trying defend a fatally flawed deal.”

Despite the latest European move, the aforementioned countries are still committed to preserving the nuclear deal, according to Ilan Berman, senior vice president of the American Foreign Policy Council.

“It’s no secret that, all things being equal, Iran’s political and economic partners in Europe would be delighted to preserve the JCPOA and continue doing business as usual with Tehran,” he said. “But Iran’s recent missteps [from the accidental downing of a Ukrainian airliner to the subsequent detention of the British ambassador] have begun to create some serious doubts in European capitals regarding Iran’s political competence and its continued suitability as a partner.”

He continued, “Add to that signals from the Iranian regime that they are reconsidering compliance with the JCPOA, and there’s more than ample reason for European governments to conclude that Iran needs to be monitored more closely—and potentially controlled a lot more.”

“The paradox here is that European countries have historically been among those most resistant to the Trump administration’s ‘maximum pressure’ campaign on Iran,” added Berman. “Even so, Iran’s behavior is nudging them towards embracing the U.S. government’s view of the threat that Iran poses to the region and the world.”