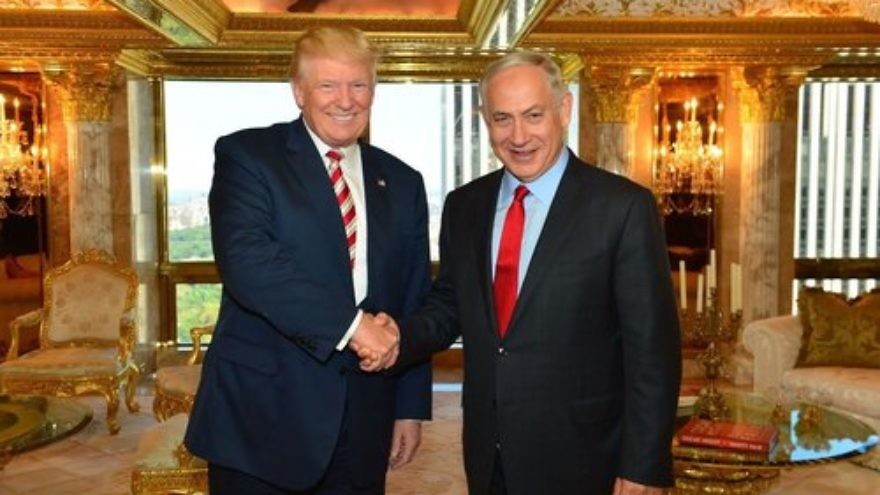 While the last eight years have been marked by policy disagreements between Israeli Prime Minister Benjamin Netanyahu and President Barack Obama, Netanyahu and Trump will agree on at least one major issue: opposition to the nuclear deal between Iran and world powers.

In his victory speech, Trump immediately sought to unite a divided electorate following a heated campaign, saying he will be a “president for all Americans” and that we will “deal fairly with everyone—all people and all countries.”

“America will no longer settle for anything less than the best. We must reclaim our country’s destiny and dream big and bold and daring. We have to do that. We’re going to dream of things for our country, and beautiful things and successful things once again,” Trump said.

Trump also took a conciliatory tone with Clinton—the former first lady, U.S. senator from New York, and secretary of state—congratulating her on a “very hard-fought campaign” and saying that “we owe her a major debt of gratitude for her service to our country.”

The view from Israel

In remarks shortly after Trump’s victory, Netanyahu congratulated the president-elect, calling him a “true friend of the state of Israel.”

“The ironclad bond between the United States and Israel is rooted in shared values, buttressed by shared interests and driven by a shared destiny. I am confident that President-elect Trump and I will continue to strengthen the unique alliance between our two countries and bring it to ever greater heights,” Netanyahu said on Twitter.

“There are many challenges that lie before you as president—at home and around the world. Israel, your greatest ally, stands by you as your friend and partner in turning those challenges into opportunities,” he said.

Opposition leader Member of Knesset Isaac Herzog took a more revolutionary tone in his comments, calling Trump’s victory a “continuation of a global trend of disgust with the old, power elite and the desire for swift and direct change.” Trump’s election, he said, is a “social, economic, and leadership tsunami” that could “lead to change in Israel as well.”

“Trump’s victory is an opportunity for Israel to immediately retract the notion of a Palestinian state in the center of the country, which would hurt our security and just cause,” Bennett said.

“This is the position of the president-elect, as written in his platform, and it should be our policy, plain and simple,” he added.

While Trump’s campaign heavily focused on domestic issues, Israel and the Middle East—where U.S. troops are currently fighting in Iraq and Syria—played a substantial role in the debate over America’s foreign policy.

During the campaign, Trump made it clear that he would repair frayed relations with Israel, tear up the Iran nuclear deal, and move the U.S. embassy in Israel from Tel Aviv to Jerusalem.

Shortly before the general election, the Trump campaign issued a strong statement Nov. 2 in support of Israel, reaffirming the then-GOP nominee’s prioritization of the close U.S.-Israel alliance, support for Israel in international bodies such as the United Nations, and support for direct Israeli-Palestinian peace negotiations without preconditions.

“The unbreakable bond between the United States and Israel is based upon shared values of democracy, freedom of speech, respect for minorities, cherishing life, and the opportunity for all citizens to pursue their dreams,” said the joint statement issued by Jason Dov Greenblatt and David Friedman, co-chairmen of the Israel Advisory Committee to Donald J. Trump.

Following Trump’s victory, Friedman told the Jerusalem Post that the level of friendship between the U.S. and Israel “is going to grow like never before and it will be better than ever, even the way it was under Republican administrations in the past.”

From the start of his campaign in 2015, Trump has been consistent in his criticism of the Obama administration’s handling of U.S.-Israel relations as well as the Iran nuclear deal.

In an interview with JNS.org shortly after he announced his presidential candidacy in June 2015, Trump said he considered Obama a “disaster” for Israel, language that the businessman would go on to repeat in Israel-related comments throughout the campaign.

“I think President Obama is one of the worst things that’s ever happened to Israel. I think he’s set back [Israeli] relations with the United States terribly, and for people and friends of mine who are Jewish, I don’t know how they can support President Obama. He has been very bad for Israel,” Trump had told JNS.org.

In the same interview, which took place before that summer’s finalizing of the Iran deal, Trump called for stronger inspections on Iran’s nuclear program.

“You’d have to have onsite inspections anytime, anywhere, to start off with, which we don’t have at all. The whole deal is a terrible deal. There’s no way the Iranians are going to adhere to any deal we make,” said Trump, adding that America had a “bunch of babies” negotiating with Iran.

Trump reiterated his opposition to the Iran deal during a speech at last March’s American Israel Public Affairs Committee (AIPAC) conference, saying, “My number one priority is to dismantle the disastrous deal with Iran. I have been in business a long time…this deal is catastrophic for Israel, for America, for the whole of the Middle East…We have rewarded the world’s leading state sponsor of terror with $150 billion [in sanctions relief], and we received absolutely nothing in return.” Clinton, meanwhile, has consistently supported the nuclear deal, though she called for a “distrust and verify” approach to monitoring Iran’s compliance with the pact.

More recently, Trump has been firm on his support for recognizing Jerusalem as the capital of Israel and the city’s special connection to the Jewish people, especially in the wake of the recent United Nations Educational, Scientific and Cultural Organization (UNESCO) resolutions that ignored the Jewish connection to Jerusalem’s holy sites.

In an October statement to JNS.org, Trump said he “will recognize Jerusalem as the one true capital of Israel. Jerusalem is the enduring capital of the Jewish people, and the overwhelming majority of Congress has voted to recognize Jerusalem as just that.” Earlier in the campaign, at a December 2015 conference hosted by the Republican Jewish Coalition, Trump had hesitated to affirm Jerusalem as Israel’s undivided capital. During the Republican primaries, he also came under fire for comments that he would act as a “neutral” broker in the Israeli-Palestinian conflict. Trump’s stated Israel policies, however, grew more unabashedly pro-Israel as the campaign progressed.

“Donald Trump and [vice president-elect] Mike Pence are both devoted to our nation’s security and to the well-being of our greatest ally and the bulwark against Islamic terrorism, Israel,” said Richard Allen, co-founder of JewsChooseTrump.org, a grassroots initiative that worked to rally Jewish support for the GOP candidate. “Respect for our allies and unrelenting vigilance against our enemies is the way America will be led going forward.”

While Trump has so far enjoyed warm relations with many pro-Israel activists and Israeli leaders, many American Jews have expressed concern over what they described as anti-Semitic undertones that surrounded his campaign. Trump’s opponents have criticized the president-elect for alluding to anti-Semitic tropes in social media posts and in speeches. In early July, Trump tweeted a graphic critical of Clinton featuring a six-pointed star, a pile of cash, and the words “most corrupt candidate ever.” Critics contended the graphic invoked anti-Semitic imagery due to its similarly to the Jewish Star of David.

Trump also came under fire for his neo-Nazi and white supremacist supporters, such as former Ku Klux Klan leader David Duke. But the Trump campaign condemned any anti-Semitism being promoted by its supporters.

“We have no knowledge of this activity and strongly condemn any commentary that is anti-Semitic,” Trump spokeswoman Hope Hicks told The New York Times regarding an October report by the Anti-Defamation League detailing anti-Semitism among Trump supporters on Twitter. “We totally disavow hateful rhetoric online or otherwise.”

Trump himself has touted his close Jewish communal ties, particularly regarding the fact that his daughter, Ivanka, converted to Judaism and now observes Shabbat with her husband, real estate developer Jared Kushner.

“I have great respect for [the Shabbat traditions], and I see Ivanka during Saturday, and from Friday evening on through Saturday night, she won’t take phone calls and they live a very interesting life,” Trump told JNS.org in the 2015 interview. “And it’s actually a beautiful thing to watch, with Jared and Ivanka. In a very hectic life, it really becomes a very peaceful time. So there’s something very nice about it.”

In line with the historic pattern of overwhelming American Jewish support for Democrats in presidential elections, Clinton garnered 71 percent of the nationwide Jewish vote to Trump’s 24 percent Tuesday, according to exit polls. Yet JewsChooseTrump.org emphasized Trump’s performance among Jewish voters in key battleground states.

“Preliminary numbers in Florida, a battleground state, show that the Jewish votes went about 2 to 1 for Trump, in the past those votes were skewed as high as 8 to 1,” said JewsChooseTrump.org’s Allen. “Our dedicated leaders in Florida, Ohio, and Pennsylvania emboldened Jews to vote for the better candidate on national security and foreign policy.”