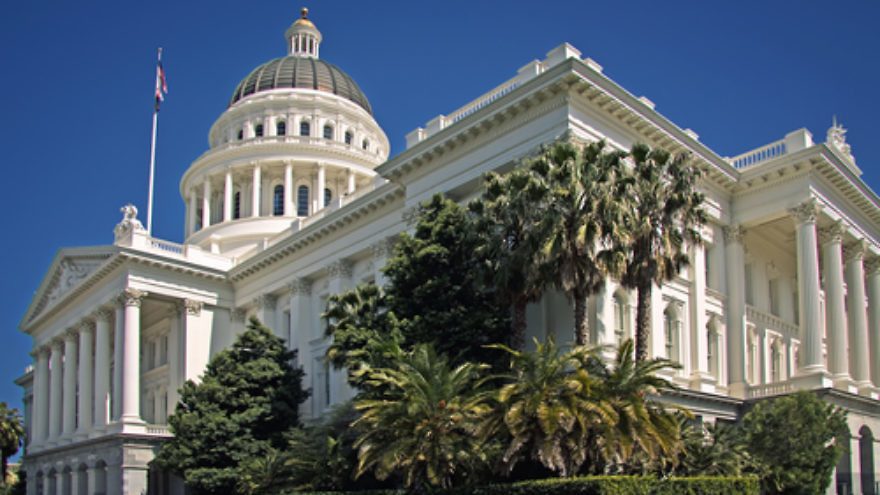 (April 13, 2016 / JNS) Close observers of the anti-Israel Boycotts, Divestment and Sanctions (BDS) movement have long kept a weather eye on California. But that attention has mostly focused on university campuses, including the prominent 10-school University of California system.

Now, the Golden State is the latest battleground in a nationwide effort to draft and pass anti-BDS laws in U.S. state capitols, and pro-Israel advocates hope that success on the state-government level will curb the boycott movement’s momentum on campus. At a Los Angeles conference on fighting BDS that was hosted earlier this month by the pro-Israel education group StandWithUs, California Assemblyman Travis Allen had a message for the movement’s proponents: “Boycotting a trade partner of ours doesn’t make sense.”

A Republican from Huntington Beach, Allen has styled himself as an early adopter of a trend now sweeping state legislatures to bar companies that boycott Israel from contracting with state governments. That trend inspired not one, but two bills that have been introduced in the California Assembly since January, the first by Allen and another by Assemblyman Richard Bloom, a Santa Monica Democrat.

Allen has since become a co-author of Bloom’s bill—which, unlike Allen’s similar measure, enjoys the support of the California Jewish Legislative Caucus. Bloom’s measure, Assembly Bill (AB) 2844, won approval on April 12 from the Accountability and Administrative Review Committee, the first of two legislative committees set to review it.

“I am very pleased that others have now joined in support of the effort, and it looks like we will now get a substantive law that will affirmatively state that California won’t support the boycott of Israel,” Allen said in an interview.

The bill was not without its opponents. Cristina Garcia, a Democrat from southeastern Los Angeles County who chairs the accountability committee, recommended rejecting the measure. But the support of the committee’s three Republicans put the bill over the top, and it passed in a 5-1 vote, with three Democrats abstaining.

“With unanimous Republican support, I am extremely confident that the current efforts to pass AB 2844 will be successful,” Allen said.

Allen has touted the wide and diverse support for legislative efforts to combat BDS, including from members of Congress and Israeli Knesset Speaker Yuli Edelstein. As calls to alienate Israel or its government have grown louder, anti-boycott activists have looked to state capitols to provide businesses with the political cover to reject those calls.

In addition to the state contractor bill, Allen authored another piece of legislation that would prevent state pension funds—worth hundreds of billions of dollars—from investing in companies that boycott Israel.

If California passes any of the bills, it would become the eighth U.S. state to formally legislate against BDS, according to Peggy Shapiro, the Midwest director for StandWithUs. So far, Illinois, South Carolina, Colorado, Georgia, Indiana, Arizona, and Florida have passed such laws, she said. Florida and Arizona have passed laws applying both to contractors and state pension funds, while the other states have done one or the other.

State legislation has become an increasingly important part of the anti-BDS arsenal, Shapiro said. StandWithUs has found “smart, willing, cooperative partners” in state capitols, working “hand in glove, reaching out to legislators, educating them about the destructive goals of BDS,” she said.

Pro-Israel groups started advocating for such legislation after the European Union (EU) began discussing labeling laws for products from Judea and Samaria. Last November, the EU decided to make such labels mandatory for some goods, removing their “Made in Israel” labels.

The increasing popularity of legislative tactics to fight BDS has corresponded with a somewhat disappointing year for campus advocates of Israeli government policy, as student resolutions seen as unfavorable have passed at an increasing number of schools.

In the past, the Louis D. Brandeis Center for Human Rights Under Law (LDB), a group dedicated to protecting Jewish civil and human rights, was able to keep a list of campuses where pro-BDS resolutions were likely to crop up.

“We’re now at the point where, sad to say, the BDS movement has saturated the country to the extent that it is no longer so predictable—you can no longer focus on a discrete number of campuses,” LDB President Kenneth L. Marcus said at the StandWithUs conference.

Part of the idea behind moving the battleground to state legislatures is to find more favorable turf for the anti-BDS message, said pro-Israel activist Noah Pollak, executive director of the Emergency Committee for Israel, who has supported the nationwide legislative effort.

“You don’t want to fight on your enemy’s terrain,” Pollak said, speaking alongside Assemblyman Allen at the conference. The “enemy,” he said, “picked out campuses for a reason.”

According to Pollak, legislating against BDS tells its proponents, “While you were doing your campus antics, the grown-ups were in the state legislatures passing laws that make your cause improbable.” The laws are meant to dent the morale of BDS advocates, who enjoy a number of advantages on campus, he said.

Among those advantages, the Palestinian narrative of Israeli “oppression” and “racism” holds a certain intrinsic pull for some minority communities, allowing groups like Students for Justice in Palestine to build diverse coalitions around their cause.

Roz Rothstein, the CEO of StandWithUs, admitted that when it comes to building diverse coalitions, “we’re very bad at that.”

“The other side is doing it to a fault—that’s all they do,” she said.

According to Estee Chandler, the founder of the Los Angeles chapter of the pro-BDS organization Jewish Voice for Peace, the anti-BDS bills are unconstitutional and part of a sustained effort to shield Israel from being held accountable for decades of “occupation” and “human rights abuses.” She calls the bills a “misleading attempt to squelch the BDS movement, which has only grown exponentially in spite of years of efforts to oppose it both on and off of college and university campuses.”

Chagrined by the state of play among student governments, some in the anti-BDS camp are hoping one group of allies—state legislators—will make the diverse coalition on the other side obsolete.

Besides, the bills have the advantage of putting Jewish organizations in a position where they don’t normally find themselves: on the offensive.

“We’re always on the defensive; we’re always responding to pro-BDS activists,” said Jacob Millner, a senior analyst at The Israel Project, a non-partisan policy and education group. “This is something we can do where we can be proactive.”