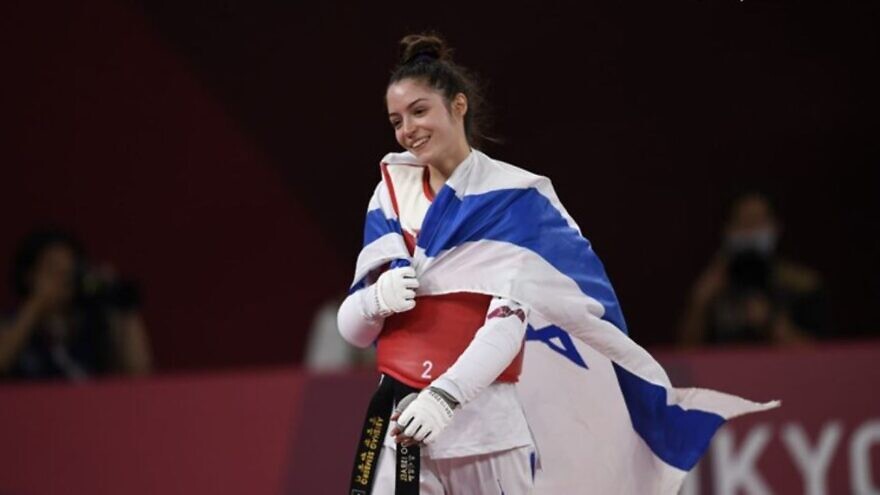 (July 25, 2021 / JNS) Israeli athlete Avishag Semberg won a bronze medal in taekwondo at the Summer Olympics in Tokyo on Saturday. The medal is Israel’s first at the Tokyo games, its first in taekwondo and its 10th Olympic medal,

Sember revealed after the competition that she had felt the contest against the Turkish athlete slipping away.

“It was really hard. It’s a competitor that I’ve already fought against and I know her. She’s 30 and doesn’t stop kicking. I worked hard and already felt the battle wasn’t mine,” she said, according to Israel Hayom.

After her win, Semberg embraced Yael Arad in the stands. Arad, Israel’s first Olympic medalist, won silver in judo at the Barcelona Olympics in 1992.

“[She’s] a young girl, but [it’s] a third woman’s medal. Here’s another lovely woman that’s joined our club … I have no doubt the effect will be the same as my medal in judo,” said Arad, according to the report. (Israeli judoka Yarden Gerbi took bronze at the 2016 Summer Olympics.)

Israeli Prime Minister Naftali Bennett also praised Semberg, saying, “You have brought great pride and have warmed the hearts of the people, not just by your enormous achievement but in your manner of expression and in the message that you conveyed to Israeli youth.”

Semberg said she was honored to be able to serve as an example and source of inspiration for young women.

On Saturday, Algerian judoka Fethi Nourine and his coach Amar Benikhlef were suspended by the International Judo Federation (IJF) for withdrawing from the Tokyo games because they were set to face Israeli judoka Tohar Butbul.

“The IJF has a strict non-discrimination policy, promoting solidarity as a key principle, reinforced by the values of judo,” the organization said in a statement.

“Judo sport is based on a strong moral code, including respect and friendship, to foster solidarity and we will not tolerate any discrimination, as it goes against the core values and principles of our sport,” said the IFJ.

Nourine told Algerian media on Friday that his support for the Palestinian cause was the reason he withdrew from the competition, reported Reuters.