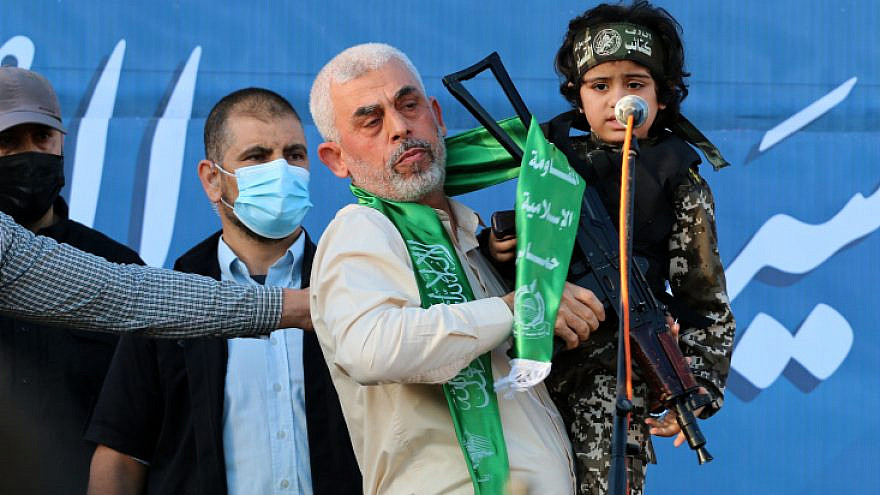 (July 29, 2021 / Jerusalem Center for Public Affairs) During the 11 days of Hamas’s rocket assault against Israel, twelve civilians in Israel and an IDF soldier, Omer Tabib, were killed by Hamas terrorists. An additional 312 civilians and three soldiers were wounded in Israel.

In Gaza, the Hamas-run Ministry of Health claimed 256 deaths. Hamas leader Yahya Sinwar said that only 80 were combatants. The United Nations Office for the Coordination of Humanitarian Affairs (OCHA) wrote, “[A]t least 253 Palestinians have been killed, 129 of whom were civilians.”

That means 124 of the dead were combatants, close to a 1:1 ratio, unprecedentedly low in terms of civilians killed in urban warfare. According to the Intelligence and Terrorism Information Center in Israel, nine children and 10 adults were killed by Palestinian rocket fire. OCHA concluded, “The result was Hamas killing its own civilians and destroying infrastructure.”

It is critical to emphasize that not all deaths in Gaza were caused by Israeli weaponry. At least 680 Palestinian rockets fell short or misfired, landing inside Gaza. These rocket misfires account for some 15 percent of the total Palestinian rockets launched.

History repeated itself for the unfortunate residents of Gaza. In 2015, a Hamas rocket fell short and killed 11 children. In the latest round of fighting, a Palestinian rocket struck power lines in the Strip, leaving many Palestinians without power during the war.

The Israel Defense Forces sought to avoid civilians. However, in cases of senior Hamas and Palestinian Islamic Jihad commanders hiding amid civilians, including their families, the IDF struck at these military targets—all considered as such under international military law.

IDF airstrikes also targeted the “Metro,” a massive underground network of tunnels built by Hamas that contained command posts and weapons-storage rooms, enabling the movement of fighters unseen, in order to attack Israel.

The IDF has named 25 senior commanders and senior technical officials of Hamas and Palestinian Islamic Jihad who were killed in airstrikes. Among those were Bassem Issa, commander of Hamas in Gaza City; Juma Tahla, head of Hamas’s Cyber Command; Khazem Khatib, Hamas’s chief engineer; and Dr. Jamal Zabdeh, an aerodynamical engineer and head of development.

The head of the United Nations Relief and Works Agency for Palestine Refugees (UNRWA) in Gaza, Matthias Schmale, told Israeli TV that Israeli airstrikes in Gaza were “precise” and “did not hit, with some exceptions, civilian targets.” He later had to apologize to Hamas for this statement.

Israel makes every effort to save civilian lives, and every death is considered tragic. British Col. Richard Kemp, who fought against the Taliban in Afghanistan, called the IDF “the most moral army in the world” for good reason. There has never been another situation in modern urban warfare in which armed forces destroyed 1,000+ military targets, and such a low number of civilians were lost. This result is not a coincidence; it is because of intentionally cautious IDF procedures that save Palestinian lives.

The IDF makes phone calls in Arabic to residents near targets, drops leaflets and even engages in “roof knocking” of buildings, in which small bomblets are dropped on roofs to spur people to flee before the target is destroyed. IDF commanders give civilians ample time to flee and ensure that as many lives as possible are saved. Recently, a journalist complained that the IDF only gave him one hour to flee from an office building used by Hamas. He failed to mention that nobody was killed in the strike, despite the building housing Hamas facilities and offices.

Here is the text of an IDF phone call to a Gaza resident in Arabic prior to an attack that appeared on a U.N. website: “How are you? Is everything okay? This is the Israeli military. We need to bomb your home, and we are making every effort to minimize casualties. Please make sure that no one is nearby since in five minutes, we will attack.”

According to a U.N. statement on June 21: “The IDF are on solid legal ground when attacking military infrastructure, the problem being the infrastructure is interwoven with ordinary peoples’ lives (emphasis added). The IDF should acknowledge that they will inevitably kill civilians, who can’t escape the conflict when destroying military targets in Gaza, and possibly find other ways to destroy military targets. Gaza’s factions, in turn, should stop committing the war crime of firing rockets from residential areas towards other residential areas which would, in turn, not provoke a violent response from Israel.”

While the IDF makes every effort to protect the innocent, Hamas makes every effort to put them in harm’s way. Hamas intentionally places its missile launchers, mortars, armories, tunnel systems and other weaponry in civilian areas. Hamas terror tunnels have been found underneath schools and apartment buildings and adjacent to hospitals.

Missile launchers are concealed in densely populated residential neighborhoods with no regard to the lives of those who must live alongside them. Even the press has been threatened to accept Hamas weapons in and around their offices, according to a former journalist who worked for the Associated Press.

The deaths of children

One of the most distressing aspects of media coverage of the 2021 fighting was the deaths of children. The Intelligence and Terrorism Information Center in Israel found that 62 children in Gaza under 16 were killed. However, at least nine of these youths were killed by errant Hamas rockets.

Likewise, under the cruel reality of the Hamas regime, many young individuals are already combatants and pose deadly threats to the lives of others before adulthood. According to the Coalition to Save Palestinian Child Soldiers, at least 160 minors have died digging Hamas tunnels, and at least 29 have died as suicide bombers.

Hamas lauds the presence of youth in its armed wing, promoting a culture of jihad and martyrdom from a young age in education and media. Though, of course, not all children who were tragically lost were involved in terrorist operations, the incomprehensible truth is that some were.

Hamas’s recruitment of children to the cause of jihad is emphasized by the militants. Following the recent fighting, the head of Hamas in Gaza, Yahya Sinwar, raised a child brandishing a gun and called for the elimination of Israel. Kindergarten graduation ceremonies re-enact the murder of Jews. Hours of this type of footage may be seen in the Gaza children’s TV program “Self-Sacrificing Fighter (Fida’i).” The show includes scenes that justify the murder of Jews because they are all “criminals.”

On the Israeli side, five-year-old Ido Avigal was killed by rocket shrapnel when a Hamas rocket struck his family’s apartment building in Sderot. Sixteen-year-old Nadine Awad, a Muslim Arab-Israeli girl from Lod, and her father, were also killed by Palestinian rocket fire. 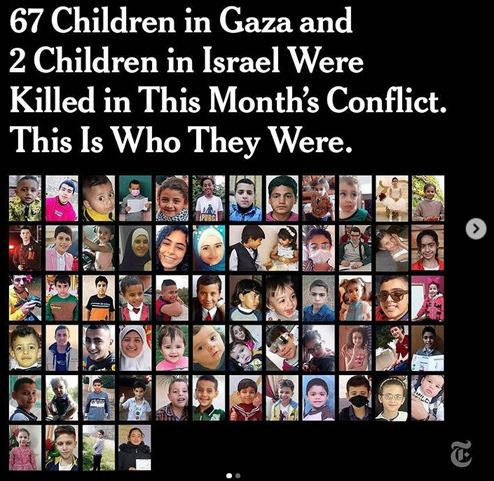 A viral graphic posted by “The New York Times,” with images of children allegedly killed by Israeli airstrikes in Gaza. Source: Screenshot.

The New York Times provides a case study of inaccurate reporting on casualties among Palestinian children. On May 26, the Times published a front-page report titled, “They Were Only Children,” which displayed pictures of 67 children in Gaza allegedly killed by Israel. It included 20-year-old Khaled al-Qanou and 15-year-old Muhammad Suleiman, both confirmed Hamas members engaged in violent anti-Israel activity. In addition, in its initial publication–corrected later–the paper included an old stock photo of a young girl and falsely claimed that Israel had killed her.

Palestinians do not all die from the conflict

Hamas and other anti-Israel groups in Gaza are known to blur the lines between those who died of natural causes and those who died in the war. The CIA Factbook reports the natural death rate (including infants) in Gaza to be 2.94/1,000 people. With a population of more than two million, about 6,000 Gaza residents die of natural causes in a year: about 16 deaths per day. These statistics do not include the deadly impact of the COVID-19 virus in Gaza.

It is safe to assume that many people in Gaza also died of natural causes during the 11-day war. In the Strip, where Hamas tightly censors information, it is difficult to know if some natural deaths were falsely attributed to deaths from the conflict, especially during the time of the coronavirus pandemic.

It would not be the first time such “errors” are used for propaganda purposes. In 2020, U.S. Congresswoman Rashida Tlaib (D-Mich.) retweeted a tweet from Palestinian official Hanan Ashrawi claiming that “a herd of violent Israeli settlers threw” Qais Abu Ramila into a well. In fact, the boy had accidentally drowned in a rain ditch.

The ‘Intrafada’: Hamas murders other Palestinians

Whenever Israel retaliates against Gaza terrorists and facilities, the regime in Gaza searches in its midst for possible spies and Israeli collaborators. Hamas uses these victims as scapegoats for their own failures, accusing them of providing information to Israel, but does not present evidence or hold a trial. Sometimes, Hamas does not release the names of those they execute, leading some to suspect that they added these individuals to the civilian casualty toll. Intelligence collection on this subject is difficult in the immediate aftermath of war, but nearly a year after the Gaza War of 2014, Amnesty International exposed that Hamas executed 23 Palestinians during the 50-day war, including six in a public firing squad execution.

In February 2016, a Hamas commander, Mahmoud Ishtiwi, was executed without trial, accused of providing Israel with information used in a failed attempt to assassinate Hamas military leader Mohammed Dief in 2014. Following the 2021 fighting, Hamas arrested 43 people on charges of spying for Israel. Some of the accused may have already been brought before a “military field court.” This is routine behavior for the authoritarian Hamas leadership, and extrajudicial killings likely occurred as a result of this war as well. More details will probably come out after the fact, as in the previous wars.

Eli Nirenberg is a student at Washington University in St. Louis.

Lenny Ben-David is the Jerusalem Center’s Director of Publications. Ben-David served 25 years in senior posts in AIPAC in Washington and Jerusalem. He served as Israel’s Deputy Chief of Mission in the Embassy in Washington, D.C. He is the author of the American Interests in the Holy Land Revealed in Early Photographs (Urim Publications).