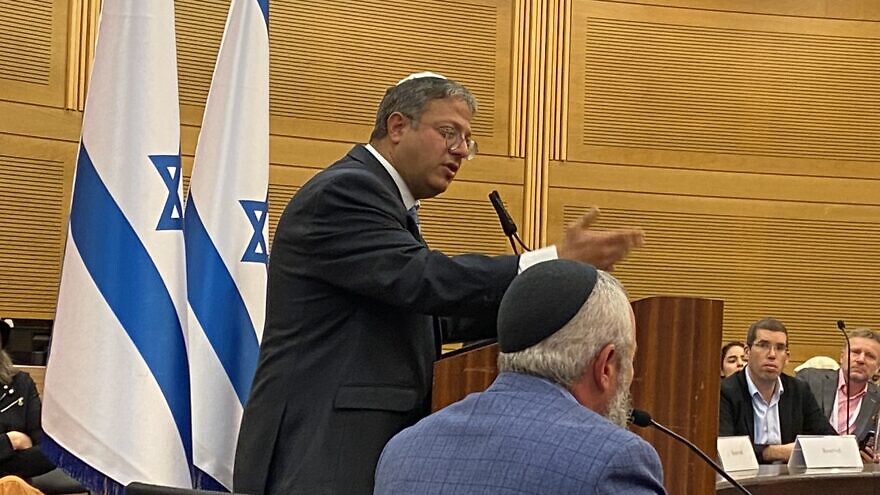 (December 14, 2022 / JNS) The group stood in prayer for the State of Israel. An American evangelical bishop took the stage to lead in the singing of Israel’s national anthem at the culmination of a gala opening evening at a Jerusalem banquet hall.

It certainly was not your standard international conference or foreign press association gathering in Israel.

Welcome to the 2022 Christian Media Summit in the Holy Land.

At a time of rising global antisemitism and deep divisions among Israelis spilling out into growing tensions with Diaspora Jewry over the makeup of Israel’s incoming government, this gathering of global philo-Semites—a colorful mix of 150 Christian news executives, journalists and Christian supporters of Israel from 28 countries around the globe—spoke volumes both about the budding relations between Israel and the diverse Christian world, and the importance the Jewish state places on nourishing these ties.

“We are living in the golden age of Jewish-Christian relations with some serious flaws and challenges,” said Rabbi David Rosen, international director of interreligious affairs at the American Jewish Committee. “We have never had a relationship with the Christian world as good as the one we have now.”

“Forty years ago this very gathering would have been unthinkable,” said Bishop Robert Stearns, founder and executive director of the Western New York-based Eagle’s Wings Ministries.

Organized by Israel’s Government Press Office, the Ministry of Foreign Affairs and the Ministry of Jerusalem and Heritage, the sixth annual four-day conference, which runs through Wednesday, includes a scheduled briefing with Prime Minister-designate Benjamin Netanyahu, news seminars, interfaith panels, a tour of the Gaza border area and a visit to the Knesset. (It is the first in-person conference in three years due to the COVID pandemic.)

Yet in an era of “social justice” and political correctness, both veteran religious leaders—who appeared in a joint panel at the conference—cautioned, however, that serious road bumps lie ahead in preserving the relationship that has blossomed over the last quarter century.

“We are witnessing a massive drop in support and even in interest in Israel among young evangelicals,” Stearns told the gathering, speaking of a denomination of Christianity known to be most supportive of the Jewish state due to its predominantly conservative leanings.

He added that at the same time, young Israelis often only know Christianity in its negative connotations after centuries of antisemitism and pogroms.

Stearns, who has worked closely with Efrat Rabbi Shlomo Riskin, the chancellor of the Ohr Torah Stone network of high schools, colleges and graduate programs, said that he was “not optimistic about this moment in time but not with hope,” citing the unbridled growth of technology as “a threat to the human soul.”

“This boon of technology brings with it a secularism and materialism which gnaws at the human soul,” Stearns said.

“It is inevitable that even if Israel is seen in historical and religious terms that the more Israel is portrayed as insensitive to Palestinian suffering the less young Christians—and Jews—will support Israel,” Rosen said.

He noted that mainstream Protestant churches are much more social justice-oriented, with the Israeli-Palestinian conflict looked at in simplistic terms and a role reversal of the David vs. Goliath story. Meanwhile, the Catholic Church, while mostly sympathetic and desirous of riding itself of centuries-old antisemitism—especially in communities with a vibrant Jewish community as in North America—is dealing with local constituents who are Palestinians.

With global antisemitism on the rise and a new Israeli government slated to be formed next week which will include ultra-nationalist parties whose leaders have espoused controversial views on other faiths, the religious leader pointed to the need to maintain and nurture Jewish-Christian ties.

Dr. Juergen Buehler, the head of the International Christian Embassy Jerusalem—an organization that is among the pioneers in ties between Israel and the evangelical world dating back four decades—called on American evangelicals in the crowd to urge former President Donald Trump to speak out against antisemites he recently hosted for dinner at his Florida estate, and pressed Netanyahu against anti-Christian remarks among members of his government in the making.

Netanyahu, who has called the evangelical community Israel’s best friends, was due to address the gathering on Wednesday at a previously scheduled conference event with parliamentarians at the Knesset’s Christian Allies Caucus after coalition negotiations forced him to postpone his planned address at the summit’s opening on Sunday.

In the meantime, the outpouring of faith-based support for Israel among participants at the gathering was both distinct and visceral, even as some of the journalists in the crowds said they had hoped to see Palestinian Christians in attendance, a group that was conspicuously absent.

“I am Christian and I love Israel,” offered Dieudonne Gollet, the CEO of the Ivory Coast based-LMTV, the first Francophone television station in Africa for Christians. A former entrepreneur whose first name means “God has given” in French, he said that God put it in his hands to create a TV station. “My work is to support Israel’s vision in Africa and to show the truth to the people.”

“It is shocking that even in this time the Jewish people have to hide their Judaism in Germany,” said Dana Nowak with Christians for Israel-Germany, who was a longtime editor at a Christian news site, noting the uptick in antisemitism in Germany. “But we also see more awareness of the situation.”

Her organization plans to conduct a bus campaign against antisemitism through various cities in Germany this spring.

“Israel is the primary custodian of the biblical history which has to be preserved at all costs because without it the Bible is completely abstract,” said Sudanese-born William Levi, founder of the Massachusetts-based Operation Nehemiah Missions, which works with Christians in Sudan. “It is not economics or politics but the will of God which attracts me to Israel.”

“I am working to mobilize support for Israel in Africa against this assault of Islamist radicalism on the continent,” said Rev. Dennis Nthumbi, the Kenya-based Africa Director of the Israel Allies Foundation, a faith-based international powerhouse that promotes pro-Israel legislation among parliaments the world over. “Africa must realize the great input Israel has in all fields, including in agriculture technology and medicine.”

“The challenges to the Jewish people’s future are always as much within as without,” he said.