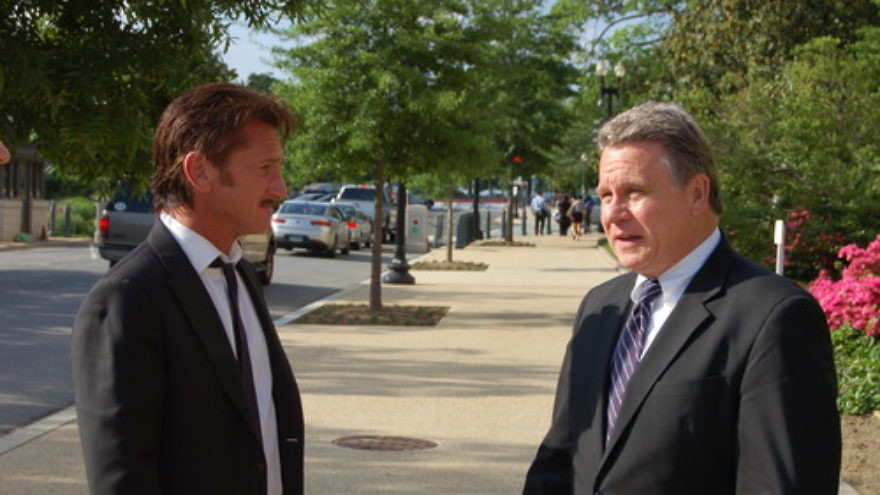 (December 22, 2013 / JNS) While an air of mystery surrounds the details of Jewish businessman Jacob Ostreicher’s return to U.S. soil after being held for more than two years in Bolivia, the involvement of legislators and a high-profile celebrity in his case may shed some light on the conditions that could lead to the freedom of other high-profile Jewish prisoners.

Ostreicher, a 54-year-old Brooklyn native, traveled to Bolivia in December 2010 to oversee rice production and was arrested in June 2011 on suspicion of money laundering and criminal organization. No formal charges were ever brought against him, but he spent 18 months in prison before being released on bail in December 2012, after which he remained in Bolivia under house arrest.

News of Ostreicher’s escape from Bolivia broke Dec. 16, and little was known about the circumstances of his return to America until actor Sean Penn told The Associated Press on Dec. 18 that he was with Ostreicher following a “humanitarian operation” to free the Jewish businessman “from the corrupt prosecution and imprisonment he was suffering in Bolivia.”

In May, Penn testified about Ostreicher’s situation in a hearing before the U.S. House Committee on Foreign Affairs’ Subcommittee on Africa, Global Health, Global Human Rights and International Organizations. U.S. Rep. Chris Smith (R-NJ), one of the leading advocates in Congress for Ostreicher’s release, had arranged the hearing and on Dec. 17 thanked Penn “for his tireless work to free Jacob.”

Bill Richardson—the former governor of New Mexico and U.S. Ambassador to the United Nations—said in a recent conference call with reporters that, like the rest of the public, he doesn’t “have all the circumstances of [Ostreicher’s] escape” from Bolivia. But Richardson attempted to explain the conditions that may have led to Ostreicher’s freedom, citing a meeting he had with Bolivian President Evo Morales a year ago as an example of the “quiet diplomacy” he and other key officials engaged in on Ostreicher’s behalf. Richardson also said that in the efforts to bring about Ostreicher’s release, there was “intensive public pressure by many Jewish organizations” that was “very effective.”

“What needs to happen in successful releases is a combination of public pressure and private diplomacy,” Richardson said. “Those combinations in many cases are the roots for success.”

On Dec. 10, Richardson wrote a letter to President Barack Obama calling for the release of jailed Israeli spy Jonathan Pollard, who in November entered his 29th year in U.S. prison and is the only person to receive a life sentence for passing information to a U.S. ally (Israel) without intent to harm America. On the conference call, Richardson said he expects “sometime soon that I’ll get a chance to talk to [Obama] about several things,” including Pollard. Asked by JNS.org what his main argument for Pollard’s release would be in a conversation with Obama, Richardson said, “You want to make the most effective argument, and the most effective argument is on humanitarian grounds.” Pollard has “been punished enough, he’s been in prison 29 years, the man has suffered enough, he’s not well,” said Richardson.

Richardson said the Pollard case is “reaching a point where I sense some momentum,” through increased calls for his release by former government officials. Part of what has been holding back U.S. presidents from releasing Pollard is “the very strong opposition to the pardon in the intelligence communities,” but that sentiment is “receding,” Richardson explained. Along those lines, Boston University international relations professor Angelo Codevilla, a senior staffer on the U.S. Senate Intelligence Committee at the time of Pollard’s 1985 arrest, like Richardson recently wrote a letter to Obama calling for Pollard’s release.

“Having been intimately acquainted with the materials that Pollard passed and with the ‘sources and methods’ by which they were gathered, I would be willing to give expert testimony that Pollard is guilty of neither more nor less than what the indictment alleges,” wrote Codevilla.

“You would hope that at this point and time, it would be enough people who know what went on [to call for Pollard’s release] that justice and humanitarian concerns for his health would dictate that he be free,” Rabbi Pesach Lerner, executive vice president emeritus of the National Council of Young Israel, told JNS.org.“The clemency file has been on the president’s desk for a couple years already, all he needs to do is add his signature, and Pollard would go free. I hope and pray that the governor (Bill Richardson) is correct, that the momentum is there.”

Lerner, who frequently visits Pollard in federal prison, said, “He has serious health issues that are difficult to address in any prison situation, and I would hope that he would be able to be freed ASAP, that not only can we take care of his medical issues, but he has a chance to live the rest of his life in a somewhat normal situation.”

In another high-profile Jewish prisoner case, Dec. 3 marked the fourth anniversary of the incarceration of Alan Gross, who is serving a 15-year prison term for helping Cuba’s Jewish community access the Internet while he was a subcontractor for the United States Agency for International Development. Gross says he was working to promote democracy, but Cuba convicted him of “crimes against the state.”

Ostreicher’s freedom did not shed any light on Gross’s case in the eyes of Scott Gilbert of Gilbert LLP, the lead attorney on Gross’s legal team.

“I think that each of these cases has its own set of facts, including the country that’s holding these people, and that really helps to determine what happens,” Gilbert told JNS.org. “The United States has a decades-long history of negotiating to obtain the release of Americans who’ve been held in foreign countries that we either have very good diplomatic relations with or very hostile relations with.”

Gilbert said there has been “virtually no serious engagement with the Cuban government to attempt to negotiate Alan’s release” since his imprisonment.

“The Cuban government, at the highest levels, has made very clear to us both privately and publicly that they would sit down with the United States with no preconditions to discuss the conditions of Alan’s release and try to negotiate a resolution, and the United States has yet to sit down and do that,” he said.

The past 60 years of dysfunction in the U.S.-Cuba relationship “is really weighing” on Gross’s case and is “causing some of the paralysis in the administration that we’re seeing,” Gilbert believes.

“That’s not an excuse for [the U.S.], they should have gotten Alan out four years ago. They should do it now. But the only way Alan Gross will be released from prison in Cuba is to have a deal negotiated between the United States and Cuba,” he said.

“It’s not clear to me from press reports exactly what Sean Penn did or didn’t do [for Ostreicher], but I think this is a situation where the president of the United States needs to authorize a high-level negotiation with representatives of the Cuban government to sit down and get this done,” said the attorney. “If the president would act, this is a far easier situation than dealing with Bolivia or anywhere else.”

High-profile Jewish prisoners in Russia, meanwhile, have seen positive momentum in their cases as of late. Teacher Ilya Farber, who had been sentenced to seven years in a maximum-security penal colony on bribery charges, saw his sentence reduced to three years by the Tver Region Court on Dec. 11. Farber’s 2012 trial drew allegations of anti-Semitic overtones when a prosecutor asked, “Can a person with the last name Farber truly help a village for free?”

On Dec. 19, Russian President Vladimir Putin announced the pardoning of Mikhail Khodorkovsky, whose father is Jewish. Khodorkovsky had been incarcerated for a decade since he was arrested on fraud and tax evasion charges upon the dissolving of his Yukos oil company.

“Many human rights groups, including AJC, were speaking for his release for many years,” Kliger told JNS.org.

Will Pollard, like Khodorkovsky, see a presidential pardon anytime soon? Bill Richardson said he sees “the glimmers of some good movement on that issue.”

“I see increased social media, Facebook, [and] Twitter [activity] on this subject, and that is read, that is something that I think is increasing momentum and has increased the potential for [Pollard’s] release,” he said.