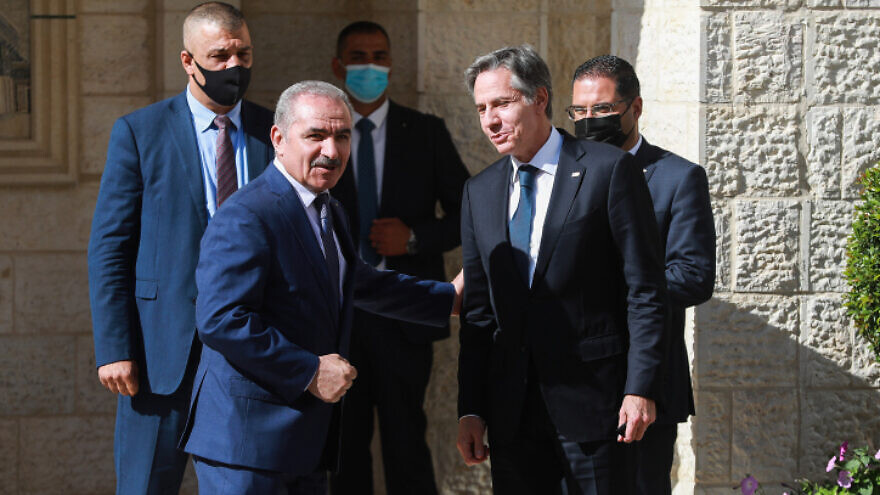 U.S. Secretary of State Antony Blinken is greeted in Ramallah on his way to meet with Palestinian Authority leader Mahmoud Abbas on May 25, 2021. Photo by Flash90.
Republish this article
753 WORDS
Spread the word.
Help JNS grow!
Share now:

Renewing the U.S.-Palestinian Economic Dialogue (USPED), U.S. and Palestinian officials gathered virtually on Dec. 14 to discuss “future areas of economic cooperation.” It was the first high-level dialogue between the two sides in five years after relations soured under the previous U.S. administration.

The meeting brought together agencies and ministries from the U.S. government and Palestinian Authority to discuss infrastructure development, access to U.S. markets and other issues related to Palestinian economic development, according to a State Department press release.

The Israeli defense establishment wasn’t pleased when the economic dialogue was broken off under former President Donald Trump “because the worse the economic situation is in the West Bank, the more frustration and the better it is for Hamas and those who want to use violence to change the status quo,” Jonathan Rynhold, who heads the Department of Political Studies at Bar-Ilan University, told JNS.

Assisting the P.A.,  Rynhold said, “helps advance several American goals. They want to keep alive the two-state solution. They want to keep the Palestinian Authority going. They don’t want the P.A. to collapse and for there to be chaos, which would mean violence with Hamas.” He noted all of these aspirations are “ways of being positive towards the Palestinians without being negative towards Israel.”

“It’s really a win-win action,” he said, because Israel also wants to preserve the P.A.’s authority as “the alternatives are much worse” — namely, Hamas.

Yet Jonathan Schanzer, senior vice president of research at the Washington, D.C.-based Foundation for Defense of Democracies, doesn’t view renewed U.S.-Palestinian economic dialogue as the best of bad alternatives. He said he would like to see the U.S. pressure the P.A. for a change of leadership.

“Political life in the P.A. is moribund. There are few options for expressing one’s discontent. People are arrested, poorly treated for criticizing the government. Abu Mazen (P.A. leader Mahmoud Abbas) has become a traditional autocrat in the Arab world,” he told JNS. “And so, if they’re trying to inflate the street value of the P.A., so to speak, then throwing money at it and trying to legitimize it through international fora — it’s putting a band-aid on the problem.”

Schanzer said trying to bolster the P.A. through economic development isn’t a long-term solution. “It may score points in terms of weakening Hamas and strengthening the P.A. in the very short term, but medium to long-term, the problems will persist,” he said.

The USPED meeting was driven by two factors, Schanzer explained — first, the Biden administration’s determination to reverse all Trump-era policies, and second, the desire to “buoy” the P.A. in the aftermath of the Gaza conflict in May during which “Hamas sought to reassert itself through violence.” Schanzer, who has written a book on that conflict, said Hamas, a rival to the P.A., was successful in making itself the focus of attention.

Given well-documented issues of corruption in the P.A., there is also concern whether economic benefits meant for the Palestinians will actually reach them. “The question is whether the Americans are, in return for the money, able to have some influence on the structure of how it gets spent,” Rynhold said.

Rynhold noted that the U.S. has successfully monitored aid to the Palestinians in the past, especially during the period when Salam Fayyad was the P.A. prime minister from 2007-2013. “In Salam Fayad’s time, aid actually led to the development in the economy, to economic growth … It was one of those rare islands of success,” he said.

Schanzer said he expects the P.A.’s political echelon to be the chief beneficiary. “Corruption continues to be the number one complaint when we look at polls coming out of the West Bank. And I think that is a reflection of reality. So, you know, the idea that the P.A. can be transformed is hard to fathom.”

“Does that mean no money will trickle down? I don’t think we can go that far. But I think the overwhelming likelihood is that the elite continue to prosper in a system designed to favor the connected and powerful,” he said.