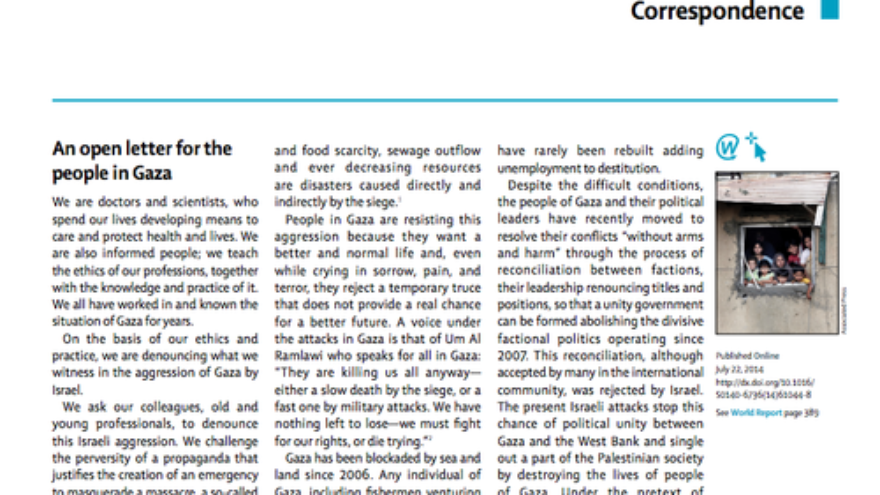 How credible are accusations about military tactics made by medical professionals who double as political activists? Not very, as recent outrage directed at The Lancet suggests. The British medical journal has misused its prestige as a scientific publication to condemn Israel and its defensive actions in Gaza by publishing “An open letter for the people in Gaza” this past July.

The letter—written by Drs. Mads Gilbert, Paola Manduca, and Swee Ang, all of whom are associated with highly politicized non-governmental organizations (NGOs)—accuses Israel of carrying out a propaganda campaign that “justifies the creation of an emergency to masquerade a massacre.” It makes unfounded allegations that Israel deliberately massacred civilians and uses illegal weaponry. No mention is made of Hamas or its use of human shields. Israel’s right and obligation to defend its citizens against indiscriminate targeting by rocket fire is absent.

The article’s authors have no expertise in military law or tactics. Any sort of political, legal, or military analysis, such as an accusation of war crimes, is outside their competence. They have no evidentiary basis on which to allege that Israel is motivated by a desire to massacre civilians.

It is a wonder how anyone, let alone a highly regarded medical journal, could take these doctors as credible sources on the conflict. What we are witnessing is the “halo effect”—where NGOs perceived to promote good principles are shielded from scrutiny. Providers of medical assistance and relief enjoy an added degree of credibility, a “double halo effect,” and are rarely challenged on their biases or questioned on their statements’ accuracy.

This “double halo effect” was in full force for the letter writers, all of whom have extensive histories of acting as anti-Israel campaigners.

Gilbert, a Norwegian anesthesiologist, is a representative of the Norwegian Aid Committee (NORWAC), an NGO that has purportedly worked with Hezbollah-affiliated groups. He politicizes his humanitarian work to the point of legitimizing terror attacks, including a defense of the terrorist action on 9/11. In regard to the 2009 operation in Gaza, Gilbert erroneously stated there was “clear evidence”that the IDF was using Dense Inert Metal Explosives (DIME) munitions, admitting in a subsequent interview that he had no proof for this allegation.

Gilbert has made accusations about weaponry he admits he has no proof for, falsely accuses Israel of targeting civilians, and denies Israel its right to defend itself.

Manduca is a geneticist with the New Weapons Committee (NWC), an organization that aims to examine weapons used in warfare. NWC has made multiple unfounded claims about Israeli weaponry.

NWC accused Israel of “experimenting new non-conventional weapons on civilian populations” in Gaza. Manduca also accused the IDF of using “white phosphorus, DIME, thermobaric bombs, cluster bombs and uranium ammunitions” in Gaza and in Lebanon in 2006. None of these accusations has any factual basis.

Swee Ang is a surgeon and founding member of Medical Aid for Palestinians (MAP,) an NGO that claims to be independent and non-political, but which repeatedly accuses Israel of “indiscriminate attacks” and “collective punishment.”

Given that these authors are hardly unbiased observers in the Israeli-Palestinian conflict, it should be a given that a reputable medical journal would print never such an article. However, The Lancet partners with a number of anti-Israel NGOs to maintain the Lancet-Palestinian Health Alliance (LPHA), “a loose network of health researchers committed to illuminating the conditions under which Palestinians live today.” Through its partnerships, The Lancet publishes reports and articles, holds annual conferences, and solicits research papers and studies that specifically focus on Palestinian issues, often in an overtly political context.

The Lancet has published numerous additional articles unrelated to medicine about the Israeli-Palestinian conflict. Most egregious was its publication of Swee Ang’s introduction to her book, “The Wounds of Gaza,” on The Lancet’s Global Health Network website. Among many unfounded accusations and statements, she claimed that the IDF illegally used phosphorus shells and bombs in the 2009 Gaza war with the intent of harming civilians. Published without sources, the piece was taken down a month later because of “factual inaccuracies.”