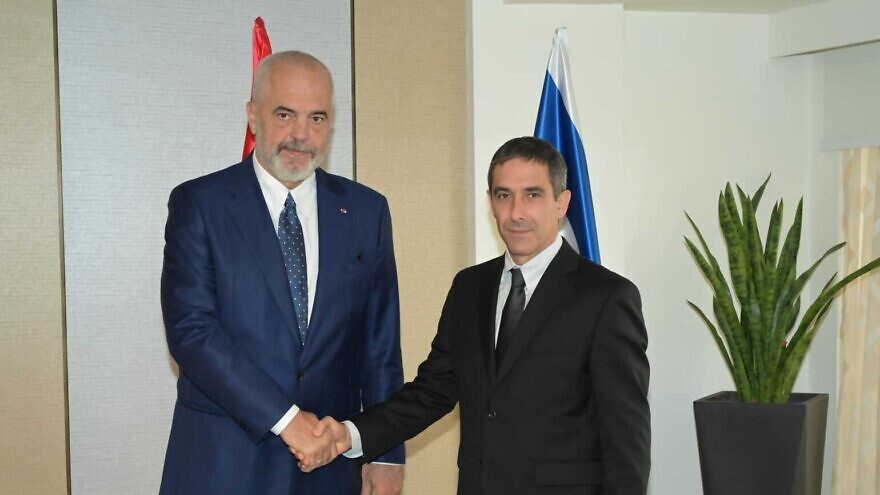 (October 25, 2022 / JNS) Albanian Prime Minister Edi Rama met on Monday in Jerusalem with the director general of Israel’s National Cyber Directorate, Gaby Portnoy. The two discussed Iranian cyberattacks against Albania, which have led it to sever ties with the Islamic Republic in September.

Iran-Albania ties had been strained since 2014, when Albania agreed to take in some 3,000 members of the exiled Iranian Mujahedin-e-Khalq (MEK) opposition group, which Iran considers to be a terrorist organization. In July 2022, Albania accused Iran of being behind a cyber attack that threatened to paralyze public services in the country, leading the country to expel Iranian diplomats within 24 hours. Iran denied the charges.

During Monday’s meeting in Jerusalem, Rama expressed interest in the Israeli model for dealing with cyberattacks, and Portnoy presented the model for defending critical national infrastructure, the active defense approach and developing a national “cyber dome,” according to an official statement.

Portnoy “detailed opportunities for assistance and invited Albania to engage in close cooperation with Israel,” the statement continued.

“Iran is not paying a high enough price for its incessant attempts to indiscriminately undermine civilian cyberspace. The position Albania took in condemning and imposing sanctions on Iran conveys the message that aggressive actions have a price. This position must be maintained,” said Portnoy. Inter-country cooperation, he continued, provided increased protection against such attempts.

Portnoy also suggested that Albania participate in developing a cybersecurity system that Israel is promoting, according to the statement.

Rama touched down in Israel on Sunday for a three-day visit at the invitation of Israeli Prime Minister Yair Lapid, just weeks after Tirana cut off diplomatic ties with Iran.

“We will continue to tighten cooperation between Israel and Albania,” said Roll.