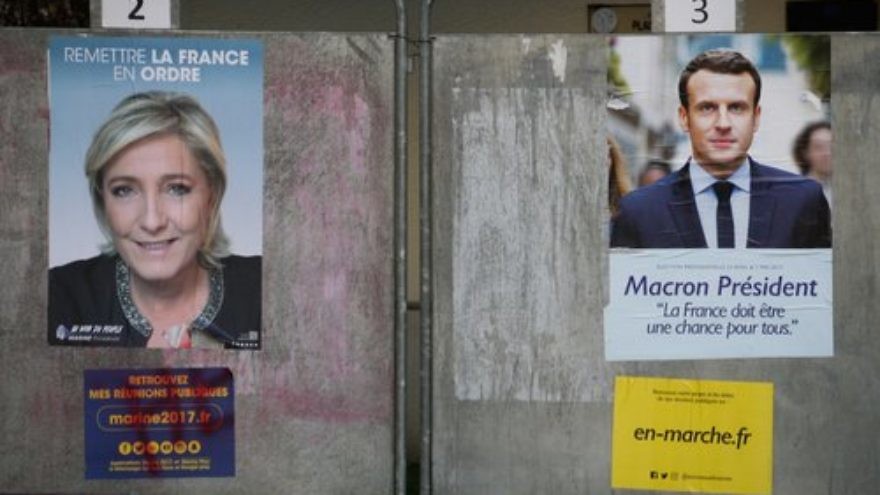 (May 7, 2017 / JNS) As French citizens voted Sunday, their eventual president-elect reiterated previous statements ruling out unilateral French recognition of Palestinian statehood and committing to support for a two-state solution.

On the eve of the election, pro-Europe centrist Emmanuel Macron of the En Marche party—who went on to win the presidential race with 64 percent of the vote, defeating far-right populist Marine Le Pen of the National Front party—said unilateral recognition of a Palestinian state would create instability and damage France’s relationship with Israel.

“I defended the principle of a two-state solution, and France’s commitment to that,” said Macron, recalling a 2015 visit to Israel as France’s minister of economy. He added, “Unilateral recognition of Palestine, right now, will undermine stability…[it would have] implications in the loss of the entire [French] relationship with the state of Israel.”

Following the election Sunday, World Jewish Congress President Ronald S. Lauder said he is confident Macron “will work to support the state of Israel against its enemies in the international arena, in all its constructs, be it from the extreme left or the extreme right.”

Israeli Prime Minister Benjamin Netanyahu congratulated the French president-elect, saying, “I look forward to working with President-elect Macron to confront the common challenges and seize the common opportunities facing our two democracies.” Netanyahu said Israel and France both face the threat of “radical Islamic terror,” and expressed confidence the “longtime allies” would “continue to deepen” relations.

Leading up to election day, Jewish leaders inside and outside France had expressed concern about the strong showing of Macron’s far-right competitor, Le Pen, in the first round of the French election.

Last month, Le Pen came under fire for comments she made absolving France of responsibility for the roundup of French Jews during the Holocaust. She has indicated that, if elected, she would have moved to ban ritual slaughter of animals in France, a policy extending to kosher slaughter. Le Pen has also called on French Jews to give up wearing yarmulkes as part of her initiative to ban religious symbols in public and fight radical Islam, while stating her intent to ban dual citizenship with non-European Union countries, troubling French Jews who also hold Israeli citizenship.

Chief Rabbi of France Haim Korsia had joined Muslim and Christian leaders in an endorsement of Macron against Le Pen.

“Fully aware that our roles require us to be non-partisan, we are, however, first and foremost responsible citizens and therefore openly are calling for a vote in favor of Emmanuel Macron,” stated the religious leaders’ letter to voters, titled “Call to Vote for Mr. Emmanuel Macron” and issued by Korsia’s office.

The letter was co-signed by Pastor François Clavairoly, president of the Protestant Federation of France, and Anouar Kbibech, president of the French Council of the Muslim Faith. The religious leaders’ open endorsement of a specific presidential candidate was considered a rare occurrence in France.

At the same time, some Jews support Le Pen specifically because of her commitment to fighting radical Islam, and are willing to look the other way on her nationalistic agenda’s implications for matters such as Jewish ritual.

The National Front party was founded by the current presidential candidate’s father, Jean-Marie Le Pen, a convicted Holocaust denier. The party, led by Marine Le Pen, expelled its founder in 2015.

In a bid to combat being portrayed as anti-Semitic, Marine Le Pen last month discreetly visited a Marseille monument for French victims of the Holocaust, laying a wreath at the site. The wreath-laying took place, with no media present, at a memorial for 30 Jewish women and children who were rounded up by the Nazis in 1943.