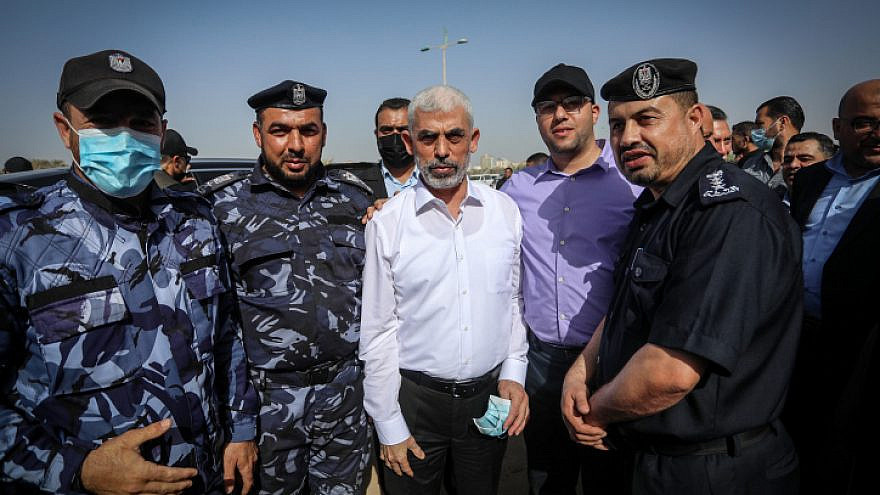 (June 6, 2021 / JNS) Hamas leader in Gaza, Yahya Sinwar, told a group of students and academics in Gaza on Saturday that the terrorist organization has the capability to demolish Tel Aviv and that Israel had only destroyed 3 percent of Gaza’s tunnel network last month during “Operation Guardian of the Walls.”

“God has decreed that we must attack Tel Aviv, and there are other capabilities we have not revealed,” said Sinwar, adding that Hamas and its terrorist partners could launch 130 missiles at the city per minute.

Sinwar went on to say that Hamas had used only “50 percent of its power” during the 11 days of fighting that erupted on May 10 and that its strategic goal was to “unite the people behind Hamas.”

“Israel has failed to destroy our capabilities to resist it. Their plan to kill 10,000 fighters failed,” he said. “Israel did not destroy more than 3 percent of the tunnels in Gaza. The [Hamas ‘Metro’] was not destroyed because we love our land, and it loves us back.”

According to the Israel Defense Forces, upwards of 60 miles of Hamas’s tunnel network was wrecked in the fighting.

The terror leader also said if conflict breaks out again, “the shape of the Middle East will change.”

“We have proven there are those willing to defend the Al-Aqsa Mosque and ready to pay a heavy price. We foiled a Zionist, Talmudic and biblical project to divide the Al-Aqsa mosque in time and space,” said Sinwar.

The Hamas leader called on the countries of the world to invest in Gaza and pledged that the funds would not be used to wage war against Israel. He also intimated that Hamas wasn’t interested in re-engaging in talks in Cairo with the Fatah movement.

“Any talk of governments and conferences whose purpose is to waste time is useless and unacceptable,” he said.

Addressing the Palestinian Authority’s proposal to form a unity government after P.A. leader Mahmoud Abbas canceled the Palestinian parliamentary elections, Sinwar said the Palestinian Liberation Organization must be restructured to represent all the Palestinian factions and “establish a national strategy for managing the conflict [with Israel] and to realize some of the aspirations of our people.”

The Egyptians, the Fatah leadership and the world, he said, need to understand that “the PLO without Hamas, Islamic Jihad, the Popular Front [for the Liberation of Palestine] and other factions is just empty political theater.”