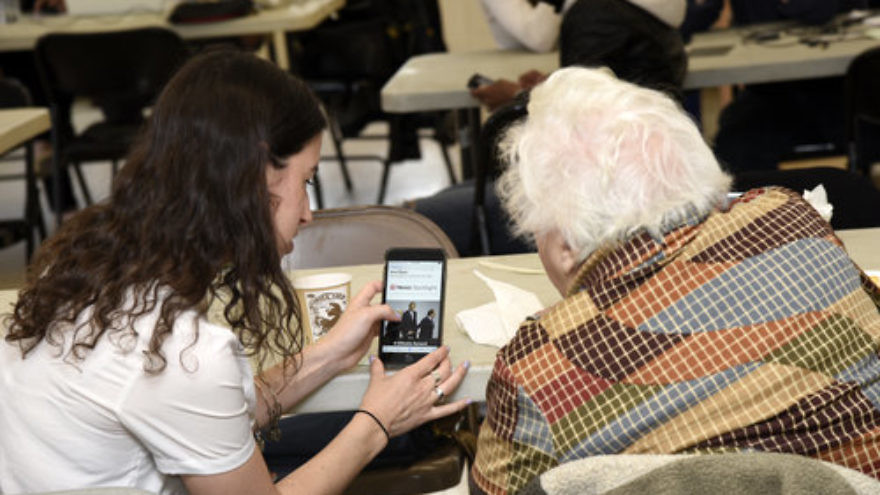 By day, Liora Brosbe is the family engagement officer for the Jewish Federation of the East Bay in Berkeley, Calif., where she reaches out to the community with a menu of opportunities for “connecting to Jewish life and each other.”

But when she’s not at work, Brosbe’s main job is raising three kids, ages 2, 6 and 8. Their home? A laboratory for Jewish learning strategies.

“Yes, they’re little petri dishes,” their mom, who is also a psychotherapist, says with a laugh. “Like most families, screen time is a huge issue at our house, both for time and content. But I tell families it’s also an amazing opportunity for low-barrier Jewish engagement.”

With the avalanche of new technologies, many of them being tapped for Jewish learning, educators, funders and parents are often befuddled about where to invest their money and their kids’ or students’ time. A new report on the implications of the wave of educational technology and digital engagement is designed to guide the Jewish community through this complex space.

Sponsored by the Jim Joseph Foundation and the William Davidson Foundation, “Smart Money: Recommendations for an Educational Technology and Digital Engagement Investment Strategy” examines many of these innovations and provides suggestions for navigating the high-tech world.

The study’s recommendations include: using virtual and augmented reality—a user could, for example, experience the splitting of the Red Sea; creating games based on alternative scenarios for “Jewish futures,” such as rebuilding Jewish life after the Roman destruction of the Second Temple; offering opportunities for students to learn coding and other technological skills, which can foster connectedness among Jewish youths and introduce them to Israeli high-tech companies; and increasingly using video, music, podcasting and other platforms.

The report is garnering far more attention than expected, according to the sponsors.

“We did not originally intend for this to be a public report,” says Barry Finestone, president and CEO of the Jim Joseph Foundation. “But the substance of the findings and recommendations really challenge us, as funders, to think strategically, creatively and collaboratively about how we can utilize educational technology and digital engagement to advance our Jewish educational missions.”

For the report, Lewis J. Bernstein and Associates interviewed 50 experts, investors and educators from both the Jewish and secular worlds to create the recommendations.

“It’s a huge media marketplace out there and most Jews are exposed to the same information as the rest of the world,” says Lewis J. Bernstein, a former producer of Sesame Street and the report’s lead researcher. “Parents and educators have difficult choices to make, and Jewish learning and wisdom compete with the secular world.”

Regarding technology’s potential value to the Jewish world, the Jim Joseph Foundation has “certainly dipped our toe in, but we knew there was so much more to understand,” says the foundation’s chief program officer, Josh Miller.

“The report is giving us a roadmap for how to focus our efforts,” he says, adding, “Training a good educator doesn’t change but, as educational technology and digital platforms do, teachers and tech producers are working together to create educational opportunities.”

For example, as the number of Holocaust survivors dwindles, the Los Angeles-based USC Shoah Foundation recently initiated “New Dimensions in Testimony,” a program that uses artificial intelligence to answer students’ questions from a pool of 2,000 pre-recorded survivor responses.

“The gigantic opportunity for the community is the new ways we can access Jewish wisdom,” says the Jim Joseph Foundation’s Miller. Ironically, he says, that means disconnecting once a week “because of our 4,000-year-old tradition called Shabbat, which reminds us that that life isn’t only about the little rush you get every time you get a text.”

Like all powerful forces, technology should be utilized in moderation, one observer notes.

“There is no question that high-tech, which is so much a part of the lives of young Jews, needs to be part of their Jewish educational experience as well,” says Brandeis University’s Dr. Jonathan Sarna, a leading expert on Jewish education and American Jewish history as a whole. “History suggests, however, that these new technologies will certainly not substitute for effective teaching. Now, as in the past, educators should look for modest gains from the introduction of new technologies, and should be wary of high costs and hype.”

Lisa Colton—who specializes in implementing digital strategies for synagogues, day schools and camps—agrees that technology alone is not the answer.

“Technical savvy is the easiest thing to find and hire, but smart design requires you to put yourself in your user’s shoes,” says Colton, chief learning officer for See3 Communications and founder of Darim Online. “But the [‘Smart Money’] report does give educators a new way to understand today’s audience, implications for innovative design, and the all-important relationship between content and technology.”

At the same time, there is already a growing field of Jewish organizations specializing in educational technology and digital engagement, including Sefaria, Reboot, BimBam and Let it Ripple.

“The report is the start of legitimizing the technical Jewish world and the practice of investing in it,” says Brett Lockspeiser, co-founder and chief technology officer of Sefaria, an online library of Jewish texts that welcomed 460,000 online users last year. “It’s helping everyone become more comfortable taking that risk.”

Back in Berkeley, Liora Brosbe recommends a four-minute Jewish 101 video on BimBam for first-time parents who are welcoming new babies. Meanwhile, as she cooks dinner in her own home, her children engage with Jewish music and content through the Spotify app.

“They’re going to have screen time anyway,” she says. “So why not Jewish ones?”