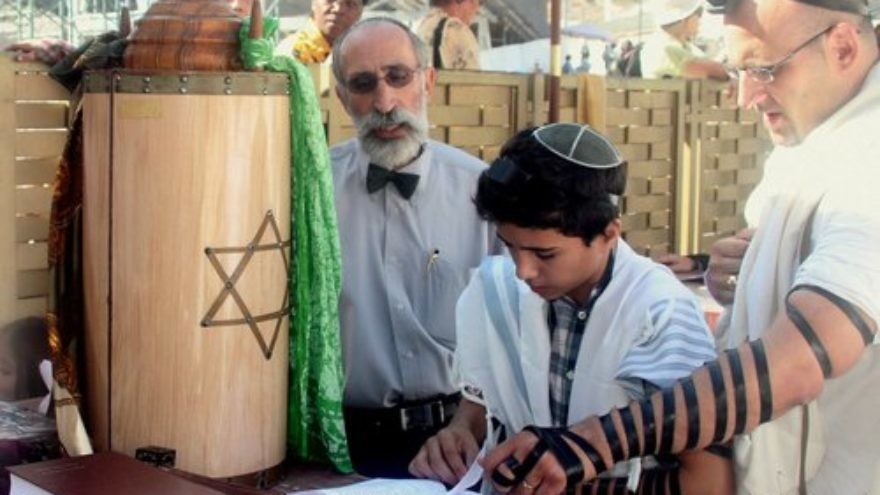 A bar mitzvah at the Western Wall. Mass exoduses from Jewish institutions after the age of bar or bat mitzvah point to a disturbing issue—that far too many decide that their Jewish learning is done, complete, at least from the perspective of formal education, writes Simon Klarfeld. Credit: Peter van der Sluijs via Wikimedia Commons.
Republish this article
1140 WORDS
Spread the word.
Help JNS grow!
Share now:

(September 12, 2013 / JNS) I’ll never forget the words of my Hebrew school teacher: “While we may have once been the Chosen People, now we are the Choosing People.” This has been a guiding principle throughout all my years as an educator, one that has accompanied me from my tenure in the Soviet Jewry movement in the 1980s and early ’90s right up until my present-day position as the director of America’s oldest Zionist youth movement, Young Judaea.

This time of the year is all about evaluating ourselves as the “Choosing People.” What choices have I made this past year, and did those choices impact the world I live in positively or negatively? On a larger scale, the now-completed High Holy Days are not just about individual self-reckoning. As Jews, we must also ask ourselves what choices we’ve made as a community—in particular, what educational choices we have made and are offering to our community members. The sad fact is, when it comes to deciding the best way to impart Jewish values onto the next generation, the writing on the wall indicates that the choices we have made as a community have often been the wrong ones.

Mass exoduses from Jewish institutions after the age of bar or bat mitzvah point to a disturbing issue—that far too many decide that their Jewish learning is done, complete, at least from the perspective of formal education. The question is why.

Part of the answer has to do with the pedagogy behind many of our educational institutions. Too much of it is either spoon-fed or else with too much focus on handed-down Jewish practice like rituals. Too much emphasis is on the “what Jews do” instead of the “why Jews do.” As leadership trainer Simon Sinek points out: “Those who know their Why are the ones who lead. They are the ones who inspire.” Too often throughout my career I have interviewed candidates for critically important educator positions, only to be met with blank faces when I ask them, “Why does being Jewish matter to the average American Jew anymore?”

Ultimately, graduates of the American Jewish educational system come no closer to answering the question, why be Jewish? This is because Judaism is taught in a vacuum, where one’s Jewish identity is entirely separate from the rest of one’s identity. Instead, children should be inculcated with the ideas and knowledge that allow their Jewish identity to not only function in a wider environment, but also serve to enhance that environment.

Our students should grow up believing that their Judaism has added value for the rest of their lives—not just until they’re done with their bar or bat mitzvah. The Jewish educational system today is in a state of, if not stagnation, one in serious need of invigoration. It isn’t enough to guilt-trip children into being “good Jewish kids,” they want to know why. Oversimplification just doesn’t cut it anymore. Children—and especially tweens and teens—have a more nuanced understanding of the world; for them, things aren’t as black and white as some educators might have you think. Children are far more ready to understand the grey areas than we give them credit for. For instance, we shouldn’t be afraid of introducing them to a discussion about God in a universe where bad things to happen to good people—to the God of the Book of Job and not only to the omnipotent, “long-white-beard” God of Genesis fame.

We must inspire them to question, to think critically and most of all to know how to engage in a conversation that started 3,000 years ago and will continue—with their voices as part of that conversation – for thousands more. Good education should be about teaching children how to have an active voice in their own communities and the community at large.

“Forming, norming, storming and performing” is a phrase we use in staff training coined to demonstrate the trajectory of the educational process. All too often, our formative years are hijacked by the educational system’s attempts to “normalize” us—usually resulting in a predictable outcome. But in experiential education—that is, all education that is non-formal—a stage called “Storming” happens and is often even encouraged somewhere along the line. Storming refers to the extraordinary events in a youth’s life that ultimately make the most impact and that lead to optimal “performing.” Sadly, many of today’s educators are afraid of the uncertainty of “storming”—seeing it as a rebellion or rejection of our community’s norms—and prefer instead to stick to a rigid curriculum. Rather, Storming should be seen as a great educational opportunity—as a challenge that we can engage with and bring our students into the process as full actors and not as passive recipients. After all, our very name as a people “Yisra-El” is “to struggle.” What an amazingly empowering message with life-long resonance to teach our youth.

In the arena of informal education (like summer camps and Israel trips), we often see the “Storming” phase unfold. This is because camp environments are more likely to be punctuated with life-changing moments that have a personal impact on the participant. For example, a camper with a Jewish mother and a Catholic father might have an epiphany about his Jewish identity through his first experience of Shabbat. I’ve often heard program alumni remark, “Oh, camp was where ‘I did Jewish.’” Whatever the case is, these transient experiences often play a far greater role in defining our children’s Jewish identity than 12 years in the Hebrew school.

As educators, we need to find ways to take what happens in an educational environment that is more personal (such as the relationship between counselor and chanich at a summer camp) and bring it into our classrooms. And in the world of informal education, we need to better adapt cognitive skill development (utilized by master teachers in the classroom) to better equip students with the knowledge and tools to engage fully in the ancient-and-contemporary community dialogue. We need to allow for probing and inquiry, and not sweep the gray areas under the carpet. We need to make our children secure in their Judaism so that one day they’ll take pride in it. We do this by first injecting the inspiration and only then teaching the particulars—not the other way around.

Let’s hope that 5774 ushers a new dawn for Jewish education, one that will see as many kids and their families opt to go on waiting lists for Jewish schools, as they currently do for summer camps. In order to be the “Choosing People,” the least our children deserve is to be presented with real, compelling choices.