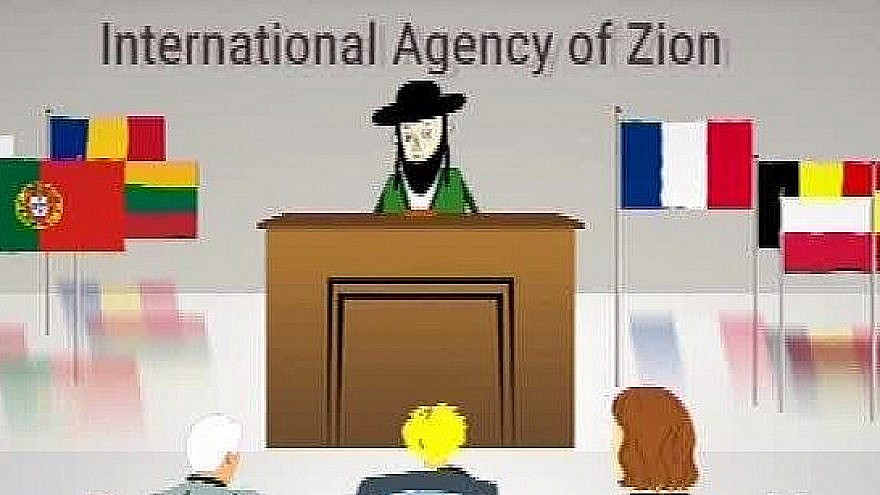 A screenshot taken from a video aired on Iranian TV on May 7, 2021, in which the narrator claims the creation of the State of Israel is part of a Jewish plot to take over the world. (MEMRI)
Spread the word.
Help JNS grow!
Share now:

(May 23, 2021 / MEMRI) A video aired on Iranian television claims that the Zionists exploited the “myth of the Holocaust” to establish the State of Israel, the first phase of their plan for world domination.

The video, called “The Big Lie,” aired on Aftab TV on May 7, when Iran commemorates “Quds [Jerusalem] Day” to express its opposition to Israel and Zionism. In the video, the narrator claims that the goal of Israel’s establishment was to create a “safe zone” for the West in the heart of the Muslim world.

“In the early 1880s, in France, several members of the international agency of the Zionists relied on the fabricated story about the massacre of 6 million Jews in World War II. And in order to prevent people from forgetting that this group is oppressed, they prepared a bill and had it ratified,” the video says.

“It stipulated that doubting the Holocaust is considered a violation of the law. Whoever violates this law is sentenced to one month to one year in prison, and has to pay a fine of 200,000—300,000 francs. After France, this law was ratified in the other European countries.

“Against the backdrop of the World War, the first phase of the Zionists’ project of taking over the world began. Due to the oppression of the Zionists by the Christian world, they had to move elsewhere, and what place could be better than West Asia and Palestine? From the perspective of the Zionists, the establishment of the State of Israel is the outcome of the imaginary oppression from which they had suffered.

“We can conclude by saying that the West’s motives to highlight the issue of the Holocaust are as follows: 1. To completely evacuate the Jews from their countries to a specific place. 2. To give the Jews a central spot where the three continents meet, and to place Israel in West Asia. 3. To create a safe zone for the West in the heart of the Muslim areas, in order to monitor the West’s security interests from within. This is how, by means of their biggest lie, the Zionists occupied the land of another people.”