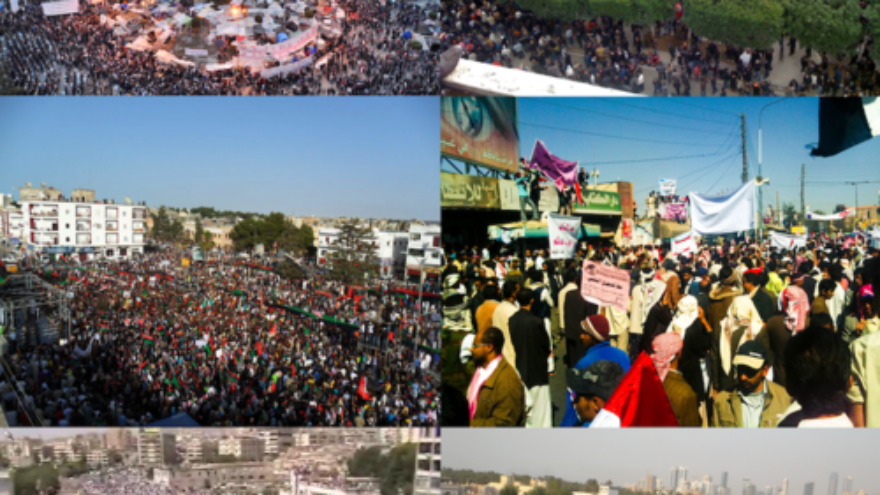 (July 11, 2012 / JNS) Israelis understandably feel imperiled by the misnamed “Arab Spring.” Their country’s three-decade peace treaty with Egypt is under assault, its strategic alliance with Turkey has dissolved, and its closest regional ally, Jordan, is withering from domestic protests.

The breakdown in political authority has flooded Israel’s borders with a slew of dangerous weapons, from Libyan missiles in Gaza to Syrian Scuds in southern Lebanon. Meanwhile, the Iranian nuclear program progresses unabated. Individually, each of these developments is cause for great concern; taken together, Israelis see the walls closing in.

Although the initial flickers of liberalism have been subsumed by the Islamist bonfire, the so-called “Arab Spring” has, paradoxically, made Israel stronger as Israel’s enemies have turned on each other. While Arab capitals burn, Jerusalem has calmly and carefully steeled itself against the possible immediate deleterious effects, building fences along its Egyptian and Jordanian borders and accelerating the deployment of its Iron Dome anti-missile system. Whereas Arab states remain mired in internal political, economic, and military turmoil, Israel hums along, its economy intact—tourism is at an all-time high—its military untested, and its government united.

For three decades, Mubarak’s Egypt was the anchor of Israel’s regional security. Since his ouster, the lawless Sinai has been the source of rocket attacks, Egypt has canceled its gas contract with Israel, Israel’s Cairo embassy staff barely survived an attempted mob lynching and the Muslim Brotherhood has issued disquieting verbal volleys against the peace treaty.

As these troubling developments suggest, the capacity of the Egyptian state has also fundamentally declined. The Egyptian economy is in dire straits: foreign reserves have dropped 60 percent, foreign direct investment has fallen by 90 percent, and this year’s budget deficit is 10.4 percent of GDP—America’s is 7.6 percent—and trending upwards. Furthermore, Egypt’s military regime and the Muslim Brotherhood are focused inward on reestablishing order and consolidating political control. Any warlike move by an Islamist-led Egypt would trigger the elimination of the American military aid that currently funds nearly 40 percent of Egypt’s defense budget. The Egyptian body politic may indeed be more hostile to the Jewish State, but its capabilities for acting on that hostility have markedly declined.

Israel’s concerns about a volatile Syria also belie the advantages reaped by a damaged Syria. Concerned about the potential transfer of Syrian Scuds or chemical weapons to Hezbollah, Israel is apprehensive of both a last ditch attempt by Assad to embroil it in war or by the possible ascent of another Islamist regime.

However, irrespective of Assad’s ability to cling to power, post-uprising Syria will also be a shell of its former self. Like Egypt, its economy is in tatters, having been hit hard by Western sanctions on its oil industry, which accounts for 30 percent of its budget. Its’ army has suffered large defections and losses at the hands of the rebels and its’ patron, Iran, has invested massively in propping up its sole regional ally. Even Hezbollah, aware of its current tenuous position in the Lebanese powder keg, finds itself increasingly isolated, having sided with Assad. Israel’s northern border has never been quieter.

Even in Gaza, where Hamas is ensconced, Israel’s successful deployment of the game-changing Iron Dome missile defense system has revolutionized the security situation, resulting in no Israeli casualties due to rocket fire thus far this year. Hamas abandoned its cozy headquarters in Damascus, fearful of aligning itself with the heretical Alawite sect against its Sunni Muslim brothers, and continues the political tug-of-war with Fatah in the West Bank. Even beyond Israel’s immediate borders, the “Arab Spring” has uncorked ethno-religious conflicts. PKK (Kurdistan Workers’ Party) attacks on Turkish military targets have spiked, fighting continues between Arab, African, and Berber tribesmen in Libya, and two new independent states have been declared, the Tuareg state of Azawad in northwestern Mali and South Sudan, marking the first loss of “Arab” sovereignty in 45 years.

Even as it rightly plans for the changes wrought by the “Arab Spring,” Israel should also recognize that as the Middle East convulses, it is more likely to be left alone. As Alawites battle Arab Sunnis and Kurds in Syria, as Kurds target Turks in Turkey, as the Imazighen fight Arabs in Libya, as the Army contends with Islamists in Egypt, and as Sunnis and Christians confront Shiites in Lebanon, people don’t have the time, energy, or resources to fight the Jews in Israel. The more the region tears itself apart, the more Israel floats to the top, unscathed economically, militarily, or diplomatically. While an Islamist ascent is undesirable, the intervening disorder only makes Israel stronger.

Gabriel Max Scheinmann is a Visiting Fellow at the Jewish Institute for National Security Affairs (JINSA).