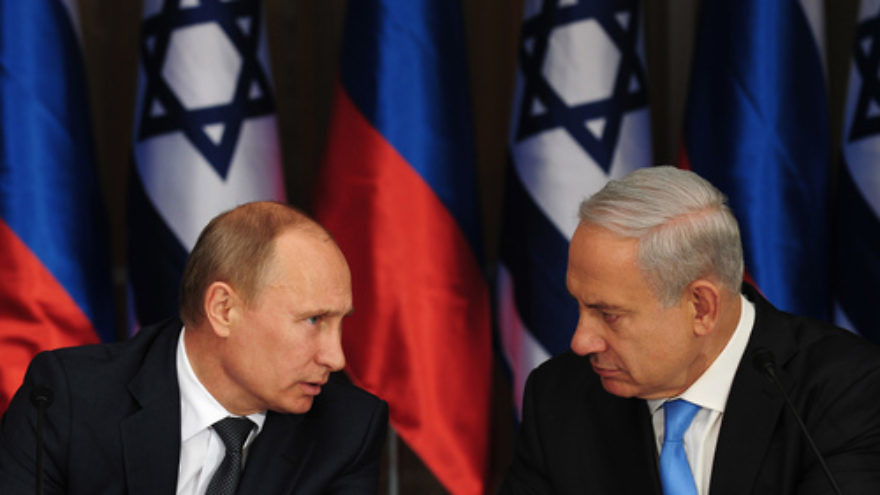 The bloody and seemingly endless civil war in Syria has taken a new twist over the past month, with reports emerging that Russia has started to significantly beef up its military presence to help its longtime ally, Syrian President Bashar al-Assad, continue his fight against rebel groups and terrorist organizations like Islamic State.

At the same time, Israel has grown increasingly concerned with the continued destabilization of Syria and Russia’s possible exacerbation of that situation. Prime Minister Benjamin Netanyahu visited Moscow and met with Russian President Vladimir Putin on Monday, in order to speak with Putin about the stationing of Russian forces in Syria. It is Netanyahu’s first trip to Moscow since November 2013.

After the meeting with Putin, Netanyahu told Israeli media that Israel and Russia agreed to create a “mechanism” to prevent inadvertent confrontations between their forces in Syria, the Jerusalem Post reported.

“I made clear our policy to try to prevent through various means the transfer of lethal weapons from Syria to Hezbollah, which is actually done at the direction of Iran,” Netanyahu said.

Putin told Netanyahu in public comments before the meeting, “Our main goal is to defend the Syrian state. However, I understand your concern and I am very pleased that you have come here to discuss all issues in detail.”

Netanyahu’s visit highlights “Israel’s serious concern about the possibility of advanced weapons reaching Hezbollah, as well as concern that Israel will accidentally clash with the Russian military,” Anna Borshchevskaya, the Ira Weiner Fellow at the Washington Institute for Near East Policy think tank, told JNS.org.

Over the past few weeks, reports have indicated that Russia has deployed weapons and military personnel to an airfield near Latakia, Syria—a stronghold of the Assad regime. These reports follow additional photo evidence in the Daily Mail that suggest that Russian soldiers have been in Syria since at least April, in addition to satellite images obtained by Foreign Policy that indicate extensive construction around Syria’s Bassel al-Assad International Airport.

Russia’s activity comes as Assad has suffered a series of civil war setbacks in recent months. Over the summer, Syrian government forces lost the Idlib province to rebel groups and the ancient city of Palmyra to Islamic State. The setbacks led to the uncharacteristic admission by the usually cocky Assad that his forces are suffering from “fatigue.”

While Russia has not elaborated on its military buildup, its government confirmed to Reuters on Sept. 9 that “experts” were assisting with Russian arms deliveries to Syria for the purpose of “combating terrorism.” Other reports suggested that Russians are taking part in military operations in Syria.

A Lebanese source familiar with the situation in Syria told Reuters that the Russians “are taking part in military operations. It is more than an advisory role.”

U.S. Secretary of State John Kerry has repeatedly sought to clarify Russia’s intentions in Syria and has warned his Russian counterpart, Foreign Minister Sergey Lavrov, that Russia’s actions could “further escalate the conflict” and “risk confrontation with the anti-ISIL (Islamic State) coalition operating in Syria.”

Borshchevskaya believes that through his buildup of Russian forces in Syria, Putin “is advancing an idea for an international coalition to fight ISIS (Islamic State), but in reality, he only wants to keep Assad in power and deflect attention from the crisis in Ukraine he created.”

“By pointing to ISIS as a greater common enemy, he will advocate that the West set aside differences over Ukraine,” Borshchevskaya told JNS.org.

Russia has been a supporter of the Assad regime since the Cold War, when the Soviet Union backed Hafez al-Assad, Bashar’s father, who ruled Syria until his death in 2000. As one of Syria’s few Mideast allies, Russia continues to maintain its Soviet-era naval facility in the Syrian coastal city of Tartus—its only such base outside of the boundaries of the former Soviet Union.

“At the same time, ensuring that Assad is in power protracts the Syrian conflict and ensures Putin influence in Syria and the Middle East, at the expense of the West. Also, given Russia’s dire domestic problems: economic recession, population decline, unsustainable military spending, and other problems, he is pointing to an external enemy,” Borshchevskaya said.

For Israel, Russia’s buildup in neighboring Syria is a major concern. Netanyahu is expected to discuss with Putin the threats posed to Israel from the increased weapons flow to Syria as well as the transfer of deadly weapons to Hezbollah and other terrorist organizations, the Israeli Prime Minister’s office said in a statement.

All the while, Israel has a complex—and somewhat positive—relationship with Russia. Since the end of the Cold War, Israel has become home to hundreds of thousands of Russian immigrants, and as such the Jewish state maintains close economic and cultural ties with Russia.

“In recent years, Israel and Russia have significantly improved ties on a number of fronts,” said Borshchevskaya. “Nonetheless, this has limits, as in practice; Putin’s regional policy is primarily driven by zero-sum anti-Americanism and anti-Westernism to position Russia as a counterweight to the West in the region.”

Israel has been at odds with Russia over the latter’s strong support for the Iran nuclear deal and the impending Russian sale of the advanced S-300 missile defense system to Iran.

On a parallel track with Israeli concerns are growing American-Russian disagreements over Syria. Kerry announced Sept. 18 that the U.S. is hoping to engage in direct military-to-military talks with Russia.

“The president believes that a military-to-military conversation is an important next step,” Kerry said, “and I think, hopefully, it will take place very shortly.”

The U.S. has long maintained that Assad must step down if there is going to be a lasting solution to the Syrian civil war. Kerry, however, hinted that the U.S. may allow Assad to stay in power for the short-term until a political settlement is reached.

“Our focus remains on destroying ISIL and also on a political settlement with respect to Syria, which we believe cannot be achieved with the long-term presence of Assad,” Kerry told reporters Sept. 18 while he was in London to meet with his British counterpart, Philip Hammond.

Meanwhile, as far as Israel is concerned, Netanyahu will likely seek for Putin to ease the former’s concerns about a possible confrontation between Israeli and Russian forces at the Syrian border.

“Israel does have some leverage over Russia; for instance, Israel had remained publicly neutral on Russia’s actions in Ukraine and did not sell weapons to Kiev,” Borshchevskaya told JNS.org. “If bilateral relations between Russia and Israel continue to deteriorate, Israel may start selling weapons to Kiev.”

Moving forward, it seems clear that Putin will continue to prop up the Assad regime at all costs, even though it has become likely that Assad cannot win the war.

“Putin wants to restore Russia as a great power in the Middle East that opposes the West,” said Borshchevskaya. “For us (Western nations), diplomacy is about win-win scenarios, but for Putin, it’s “I win, you lose.’”