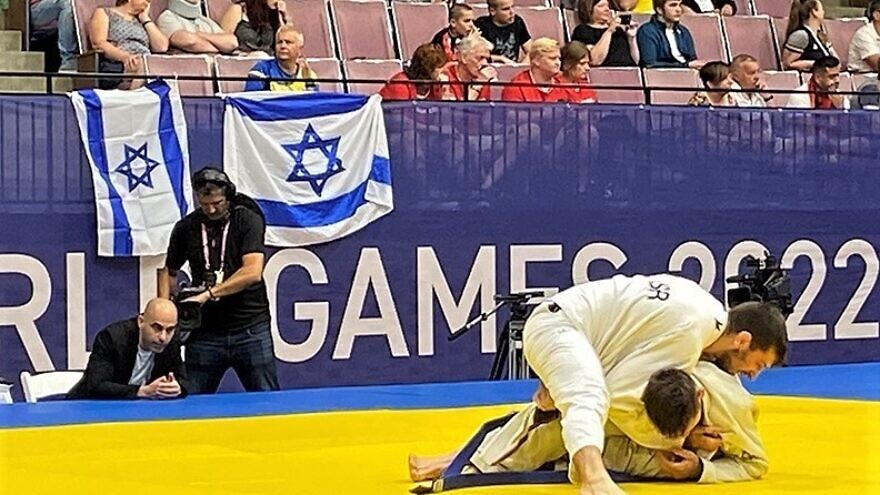 (July 18, 2022 / Israel InSight) Despite a final two days of podium near misses by Israeli athletes competing in acrobatic gymnastics and wakeboarding at the 2022 World Games in Birmingham, the leader of the Israeli delegation was “speechless” at how well the delegation did overall.

Israel came in 11th overall in gold medals at the World Games with seven, just ahead of Spain and Great Britain, and just behind China and Colombia. Add three silvers and four bronze medals, and Israel tied for 13th overall with 14 medals, the same number as China and Sweden.

After watching Israel’s final event in the World Games, where Nili Block won silver in women’s 60-kilogram Muay Thai, Ayelet CEO Arik Kaplan marveled, “in my best dreams, I never dreamed we would be in the first 15 countries.”

Ayelet is the Federation of Non-Olympic Competitive Sports in Israel and is in charge of the World Games delegation. The World Games consists of sports that are not in the Olympics, though some had been in the Olympics before, while others are expected to be approved in the coming years.

Kaplan said the World Games results show the wide range of world championship-caliber athletes in Israel, and he hopes to attract more support in Israel for the athletes, and from donors around the world. “We represent Israel just like any other sport, but unfortunately, the support we get is less,” he said.

Despite a relative lack of resources, “we are doing a great job, with amazing coaches, with amazing athletes; it is very difficult to do—send them around the world, give them scholarships” and everything else they need to compete at the highest level.

Block lost in the Muay Thai finals on July 17 to Charlsey Maner of the United States, 30-27, as the spirited Israeli delegation at Boutwell Auditorium held its own in the face of a loud hometown crowd. On July 16, Block won the semifinal against Niamh Charlotte Kinehan of Great Britain, 30-27, and she defeated Ewin Ates of Sweden on July 15 in the quarterfinals, 30-27.

In men’s 71-kilogram Muay Thai, Itai Gershon was eliminated in the quarterfinals by Thailand’s Thanet Nitutorn, 30-27. Nitutorn would go on to win the gold. 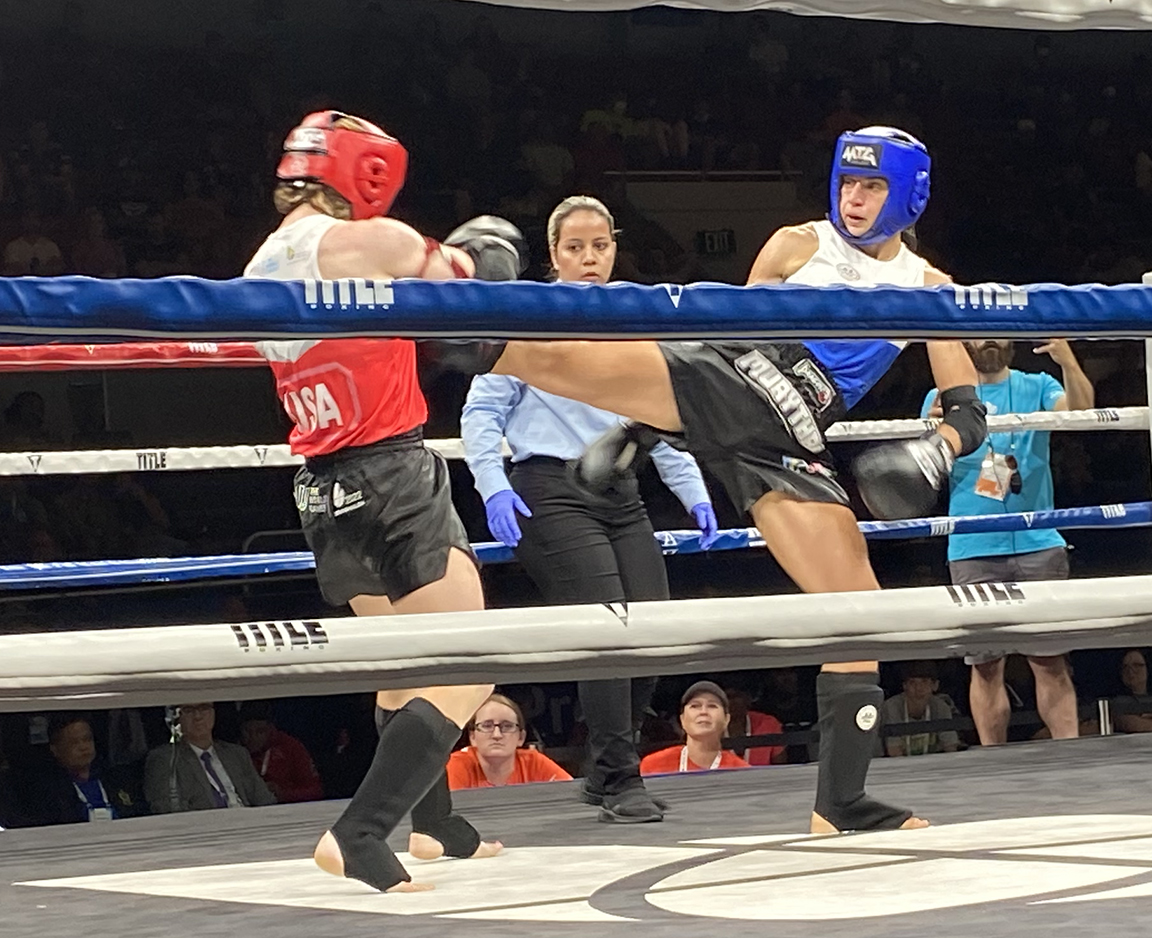 Men’s kickboxing at the World Games in Birmingham, Ala., July 2022. Photo by Larry Brook.

Daria Atamanov started the medal parade for Israel on July 12 with two golds and one silver in four rhythmic gymnastics events. Kickboxers Shir Cohen and Or Moshe won gold in their respective divisions on July 13.

The flurry of medals came on July 15, with Israel scoring five medals in Jiu-Jitsu—two gold, one silver and two bronze—along with a bronze in acrobatic gymnastics.

Meshy Rosenfeld got gold in the women’s 57-kilogram division, defeating Galina Duvanova of Kazakhstan in a referee decision following a 0-0 score. She had defeated Duvanova in the pool round, 18-0.

Saar Shemesh received the bronze medal in men’s 85-kilogram Ne-Waza by “walkover,” as there was no opponent for the bronze medal match. The semifinal match between Maciej Kozak of Poland and Bader al-Kuzai of Jordan did not take place, as Kozak did not show and al-Kuzai “refused to compete,” according to the announcers.

The Jordanian delegation reportedly was protesting a referee’s decision in the earlier match between al-Kuzai and Faisal Alketbi of the UAE, which was scored 0-0 but went to Alketbi by advantage. 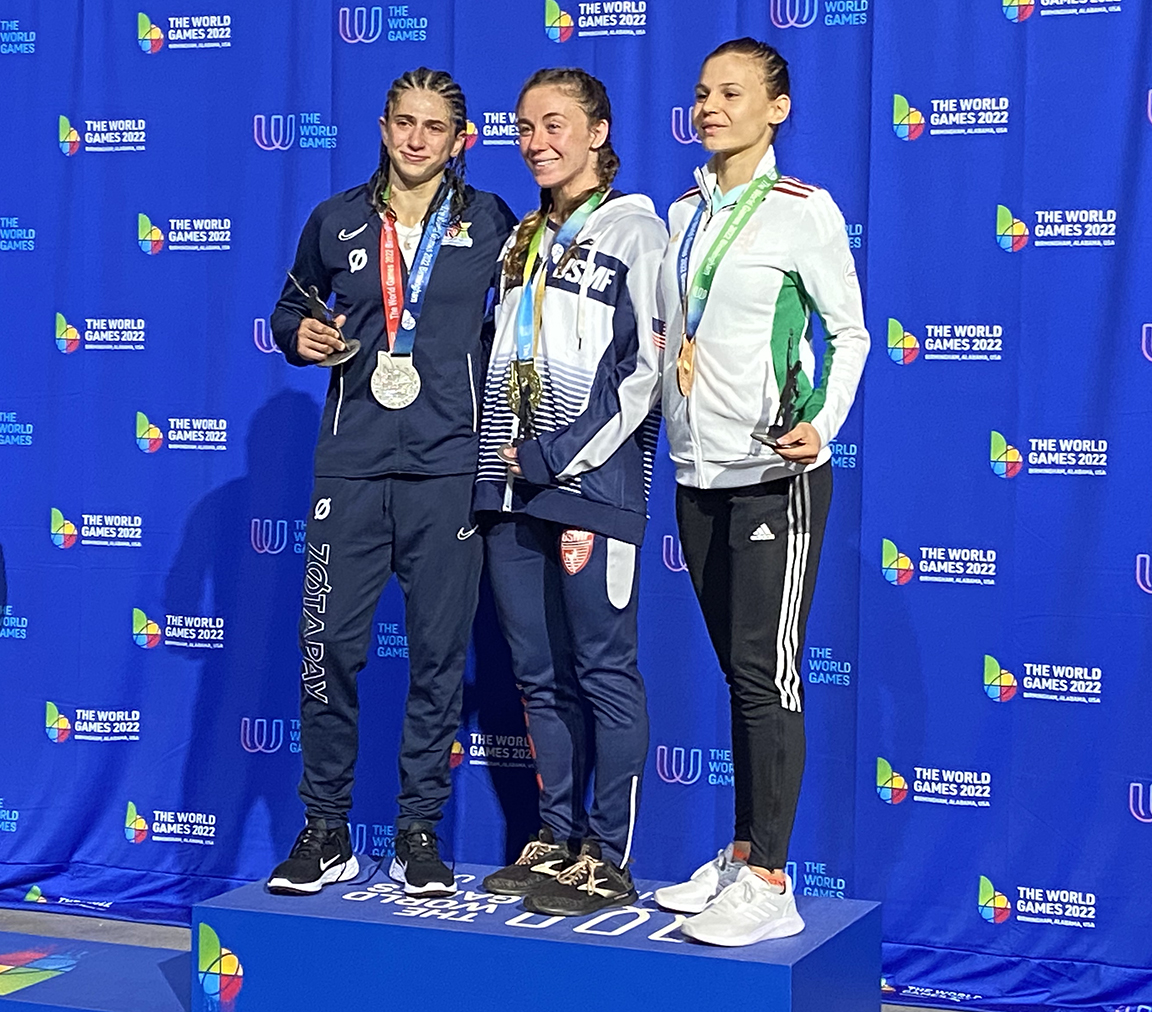 Nili Block in the gold medal bout, and at the podium with her silver medal at the World Games in Birmingham, Ala., July 2022. Photo by Larry Brook.

On the second day of Jiu-Jitsu, Rosenfeld won the women’s open Ne-Waza gold medal, defeating Bogdana Golub of Ukraine, 2-0. In the semifinals, she had defeated Galina Duvanova of Kazakhstan, 2-2, by referee decision.

In the quarterfinals, she lost to Shamma Alkalbani of the UAE, 2-0, and defeated Tainara Weidgenand of the United States, 14-0.

Saar Shemesh won his second bronze, as Mohamed Alamri of the UAE withdrew in the men’s open Ne-Waza bronze match. Shemesh lost to UAE’s Faisal Alketbi in the semifinals, 0-0, on advantages.

Israel was one of four teams that withdrew from the 12-team mixed national competition. 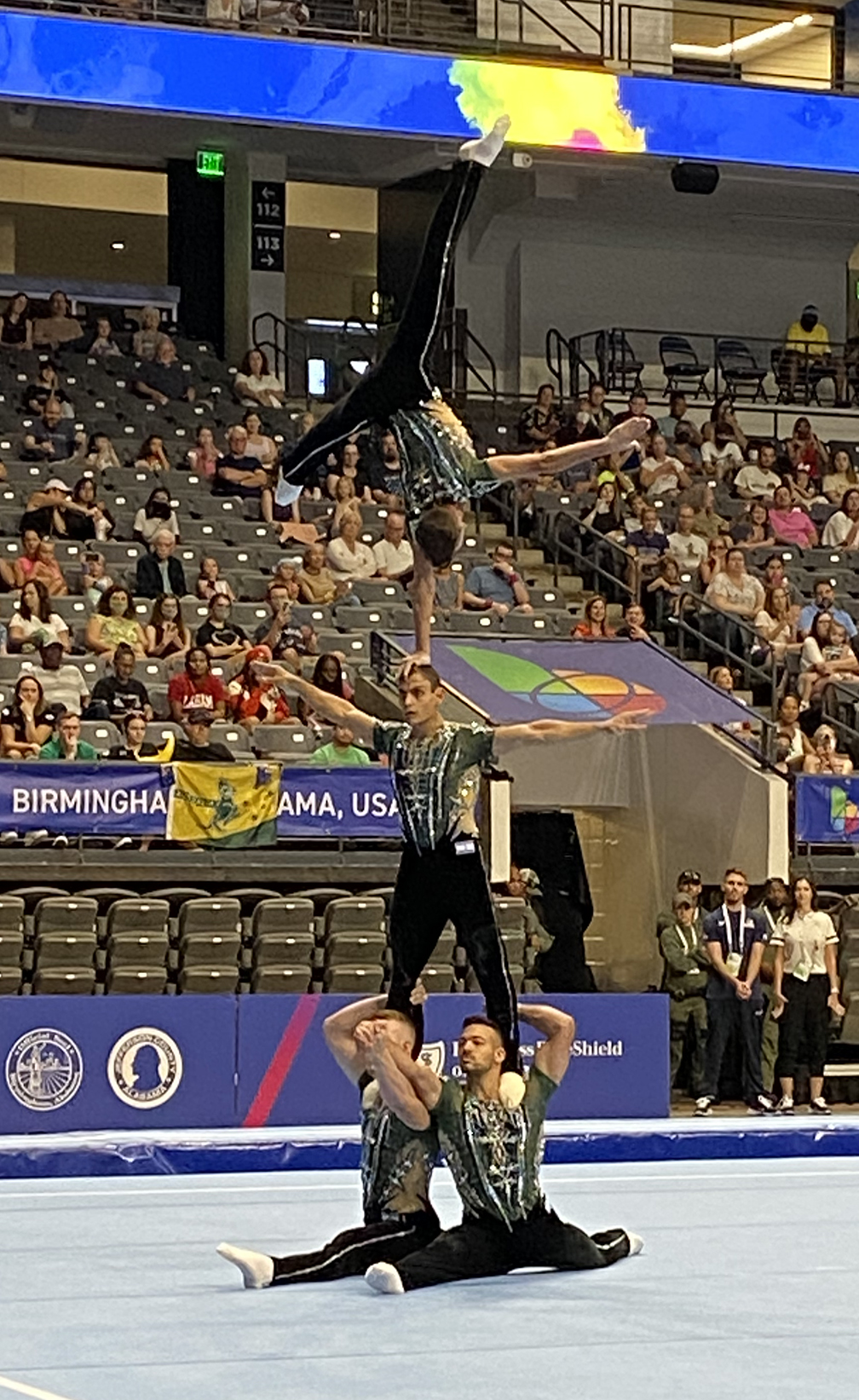 Men’s group acrobatic gymnastics at the World Games in Birmingham, Ala., July 2022. Photo by Larry Brook.

In acrobatic gymnastics, Israel reached the finals each day, as four teams moved on from the qualifying rounds, but managed just one bronze medal, in mixed pairs on July 15. Adi Horwitz and Meron Weissman placed third in the finals, behind Belgium and Germany, after qualifying second overall with a second-place finish in dynamic exercise and third in balance.

In women’s groups on July 16, Nikol Aleinik, Meshi Hurvitz and Inbal Zeitounei finished fourth in the finals. In the qualifying rounds, they were second in balance and third in dynamic, for second overall.

In men’s wakeboard freestyle, Guy Firer placed third in the semifinals to qualify for the top six in the finals but finished fourth on July 16.

In sport climbing, Nimrod Marcus placed sixth in the men’s boulder final. He had placed third in the qualification round, where six of 11 athletes advanced.

Ayala Kerem placed sixth in the women’s boulder final. She had placed fourth in qualifying to advance to the top six out of 12.

In Wushu, Anastasia Chiriliuc placed fifth in the five-person field for women’s Taolu Jianshu, and fourth in Qiangshu, for a fifth-place overall finish.

Liana Odikadze and Alexey Korobchenko did not advance to the semifinals in DanceSport on July 8, placing 16th in a field of 20 couples in the Latin competition.

This was the first World Games where Israel had team competitions, having qualified for the eight-team men’s and women’s lacrosse tournaments. It also marked the debut of the new sixes format for lacrosse, played on a smaller field with six per side and a 30-second shot clock. 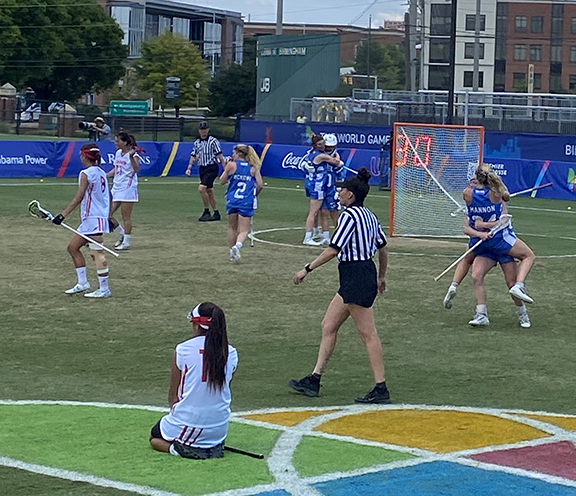 Israel’s women’s lacrosse team celebrated its 13-12 victory (their highest ranking) in the fifth place game at the World Games in Birmingham, Ala., on July 15, 2022. Photo by Larry Brook.

The Israeli women finished fifth, defeating Japan 13-12 in their final game on July 15, giving them their highest-ever world ranking. The team received a lot of local attention as Olivia Mannon, who grew up in Birmingham, Ala., and played lacrosse in high school, was a member of Team Israel. She said being able to represent Israel and play lacrosse in her hometown was “like a fever dream,” and she played “the game of my life” in the fifth-place game with the traditional defender scoring three goals, including a game-tying goal late in the fourth quarter.

The men’s team notched its first international success in the new lacrosse sixes format, defeating Japan in a come-from-behind overtime win to start the tournament. It would be their last, as they came in eighth.

Regardless of the results, Jacob Silberlicht said it was a privilege to put on the Israeli uniform and play “for all the kids in Israel who have ever picked up a lacrosse stick. … Arab, Jew, Muslim or Christian,” many of whom are from underprivileged communities.

Kaplan said the 2022 World Games were “an amazing achievement for Israel, for Ayelet Federation, to make history.”

Now, attention turns to the 2025 Games in Chengdu, China, and at least matching the achievements from 2022.

But most memorable, he said, was hearing “Hatikvah” played in venues around Birmingham during gold medal ceremonies. “Always, when there is ‘Hatikvah,’ I am crying … it is a dream come true.”