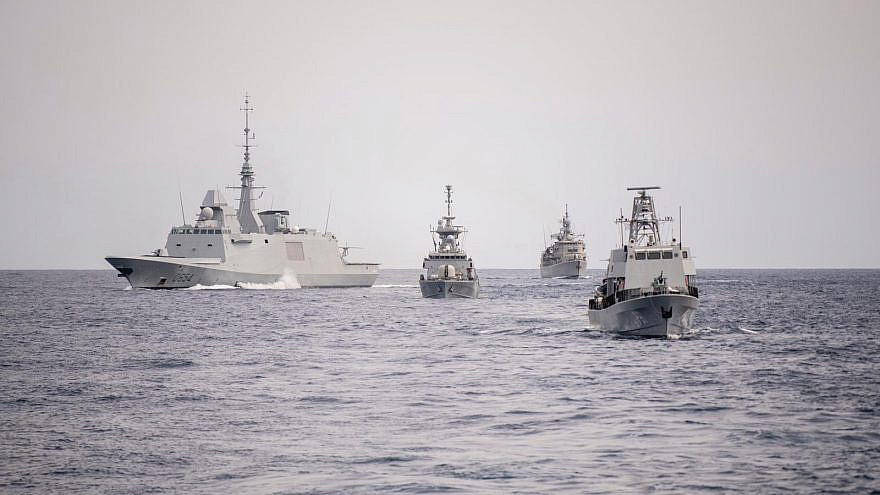 (March 23, 2021 / JNS) After being canceled last year due to the coronavirus, an annual international naval drill in which the Israeli Navy played a highly significant role was held this month near Cyprus and for the first time also saw four other nations take part in the training.

The added participation of Cyprus and France meant that five countries with fleets in the Mediterranean took part in the “Noble Dina” exercise, held 150 nautical miles southwest off Cyprus, with the Israel Navy playing a major part in terms of command and planning.

The result is a boost to Israel’s Mediterranean naval standing.

Two Israeli missile ships, a submarine and a helicopter joined vessels from the United States, Greece, Cyprus and France for the five-day exercise.

‘The key word is coalition’

Speaking to JNS, Lt. Rony Gankin, Israel Navy exercise planner, said that the purpose is to deepen the cooperation between the fleets and develop a common dialogue.

“Now that the whole of the Navy’s operational units have been vaccinated, we can conduct the exercise without concern,” he said.

Gankin described that in the anti-submarine face of the exercise, vessels practiced jointly detected underwater threats, and that ships with advanced counter-submarine warfare technology took part.

He explained that “the goal was to promote three objectives: Interoperability at sea, mutual operational learning—we shared our working techniques and learned from others—and showing a presence in the Mediterranean.”

With regards to the latter objective, added Gankin, “one of the best ways to improve security and quiet in the Mediterranean is when everyone sees lots of forces [working together]. This boosts deterrence.”

Detecting submarines is a complex and challenging mission due to the physical properties of water, he said, adding that they are a potent threat due to their ability to carry almost any kind of munition onboard—“almost all states face this challenge.”

One of the submarines taking part in the drill simulated an enemy vessel with the remainder of the ships practicing responses. One of the surface ships played the role of the vital responder to the underwater threat with the remaining ships needing to defend it.

“They had to create a structure around this ship,” said Gankin.

A surface ship is capable of attacking and destroying submarines using torpedoes and underwater mines, even though in most cases, it’s the submarine that has the advantage.

Communications systems onboard all of the responding ships were connected together, said Gankin, creating a joint awareness.

He emphasized that “the key word is ‘coalition.’ When working together in this scope, it presents very close cooperation.”